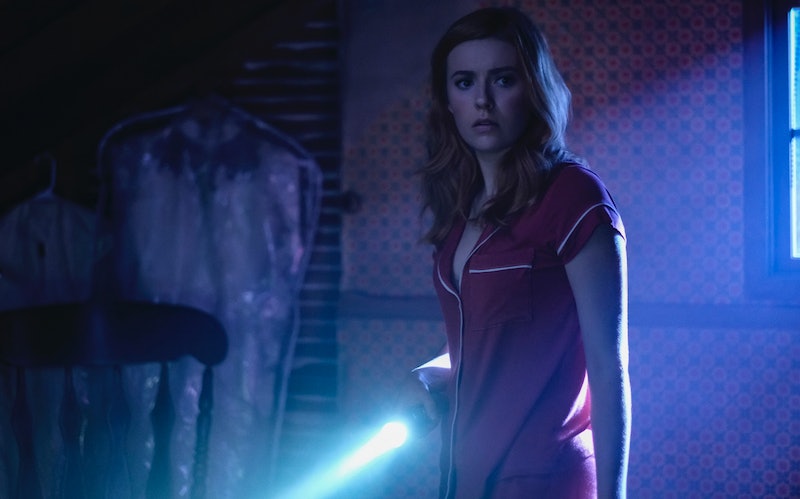 On Oct. 9, The CW will debut its gritty reboot of Nancy Drew — based on the books by ghostwriter Carolyn Keene. The series followed a teenage girl and amateur sleuth (played by Kennedy McMann in The CW show) who often bested her lawyer father and local police by solving mysteries with her friends. But while the new TV show is based off the literary franchise, it isn't based off any one book from the Nancy Drew Mystery Stories, by all accounts, but is rather an homage to them as a whole.

According to the New York Times, The Hardy Boys creator Edward Stratemeyer first conceived of Nancy Drew in 1929. He wrote the outline for the first three books — The Secret of the Old Clock, The Hidden Staircase, and The Bungalow Mystery — and recruited a journalist named Mildred Wirt Benson to write them, per the NYT. These books were published in 1930 under the pen name Carolyn Keene (as were all ensuing books).

According to the New York Post, some of the earlier novels were revised in 1959 by Stratemeyer's daughter, Harriet Stratemeyer Adams, as requested by her publisher, Grosset & Dunlap. As a result, Nancy's now-outdated clothes and some racist details were fortunately updated. For example, the article reports that in the 1939 version of Clue of the Tapping Heels, Nancy's love interest Ned refers to someone as "colored" and "darky." Tunji Kasim, the actor who plays him in The CW revival, is black, which shows how much the CW has updated the story.

As for the 2019 Nancy Drew show, there have been several updates from its source material. For one, the beloved heroine isn't quite as chaste as she is in the books and is depicted having sex in the trailer. "We're making the show for The CW and that audience," executive producer Stephanie Savage told the Boston Herald. "I have nieces that are 7 and 5, and goddaughters that are in high school and college; we've read the books together and watched the '70s series together, and the little ones know that this show isn't for them and that they're going to have to wait 'til they're older."

Another departure from the books is that there will be supernatural elements. Just like Scooby-Doo, there was always a rational explanation for the mysteries at-hand in the Nancy Drew books, which will apparently not be the case in this reboot.

One of the series creators, Stephanie Savage, said in an interview at PaleyFest that Nancy Drew's supernatural elements will become even more prevalent as the season goes on. "It's a huge part of the show, and something that Nancy and all of her friends are going to have to come to terms with," she said.

But while The CW show seems to have concocted a brand new mystery for Season 1, the New York Times stated in the same article that there are nods to the original books sprinkled throughout the series, including a reference to The Secret of the Old Attic in the pilot.

Season 1's inciting incident involves Tiffany Hudson — a well-to-do woman who's murdered one night outside the diner where Nancy waitresses. This may or may not be connected to Lucy Sable, a girl who died back in 2000 and has since haunted the town of Horseshoe Bay. In addition to the main mystery, executive producer Melinda Hsu Taylor told Deadline that each episode will include "another mini-mystery," as is evidenced with the titles. Episode 2, for instance, is called "The Secret of the Old Morgue," while Episode 3 is "The Curse of the Dark Storm."

The CW's Nancy Drew may not be based on one specific book in the long-running series, but its DNA is all over it.