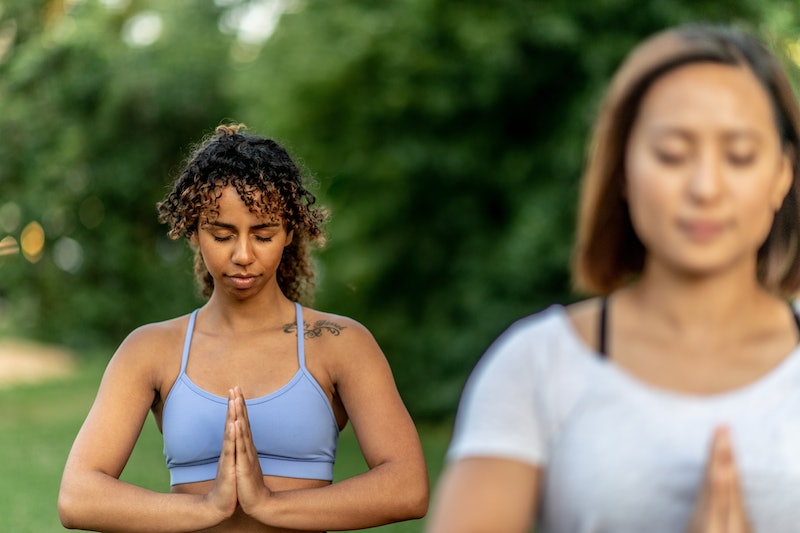 Breathing may seem pretty intuitive — breathe in, breathe out, continue until, well, death. An increasing amount of people are hyping up a more involved form of the practice. They claim that breathwork — breathing with intention and with certain rhythms — can help blood pressure, digestion, stress, and even mental health. Research on breathwork, however, reveals that while there's definitely some benefits to breathing therapy, it's a long way from a cure-all.

Defining breathwork is tricky. Broadly speaking, the term breathwork can apply to all kinds of guided changes to your breath, including sped up breathing, breathing in yoga poses, or simply bringing awareness to your breath, as you do when you're doing mindfulness meditation. One of the most popular methods, clinical psychologist and breathwork teacher Dr. Belisa Vranich, Ph.D. tells Bustle, is diaphragmatic breathing, a technique which encourages deep, slow breaths. Doing diaphragmatic breathing, she says, "means expanding in the middle and narrowing on the exhale, without the use of the auxiliary muscles of the neck and shoulders."

Slow, deep breathing has also been tested as a way to control pain and other symptoms, with some positive results. A small 165-person study at Western Michigan University in 2019 found that deep breathing meant people in cancer infusion suites reported fewer symptoms of pain and nausea, while a study of 36 patients with gastroesophogal reflux disease published in Clinical Gastroenterology and Hepatology in 2018 found that diaphragmatic breathing helped some patients reduce reflux and burping. However, all of these findings are based on small, short-term experiments, and some of them can be explained by the placebo effect.

When it comes to mental health, breathwork practitioners say breath can reveal a lot about our mental states. "Every breath that we take mirrors our conscious and unconscious thoughts, the emotions, feelings, and sensations that we experience in every moment," Dr. Ela Manga, MD, a breathwork expert who runs an integrative medical practice, tells Bustle. "Observation of the subtle nuances of our breathing patterns is the obvious way to observe mental and emotional fluctuations."

Breathwork for mental heath has a long history. One study of 40 adults published in Frontiers In Psychology in 2017 found that practicing slow breathing might help alleviate stress and improve depression, while small studies published in 2014 and 2017 found that yogic breathing might help veterans with post-traumatic stress disorder (PTSD). Another study in Perspectives In Psychiatric Care in 2016 discovered that an eight-week training program in diaphragmatic breathing could reduce anxiety symptoms. Again, these studies were very small, so it's hard to make big claims about breathwork's effectiveness for mental health.

There doesn't seem to be much harm in doing breathwork for your body — as long as you accept its limits. (Intense forms of breathwork, such as holotropic breathwork, can carry the risk of inducing hyperventilation, and are not recommended for people with a history of breathing issues, cardiovascular issues, or severe mental illness.) Mindful breathing and yogic breathing have been recommended by the American Mental Health Counselors' Association as helpful for treating anxiety and depression, with the caution that they're not meant to be used on their own. Harvard Medical School recommends using slow breathing as part of a daily relaxation exercise to reduce stress.

While it's not recommended to rely on breathwork to lower high blood pressure or treat mental health issues on its own, it's a good thing to have in your toolbox. Paying attention to your breath can help you relax and slow yourself down — and when you've had a stressful day, that can be a godsend.

More like this
Here’s What Health Means To People In 2023
By Isabella Biedenharn
Kourtney Kardashian’s Wellness Guru Shares Her #1 Tip For Better Health
By Taylor Jean Stephan
The 11 Benefits Of Aerial Yoga, According To Trainers
By Carolyn Steber
11 Exercises For Dowager's Hump That'll Help Your Neck Posture
By Carolyn Steber
Get Even More From Bustle — Sign Up For The Newsletter
From hair trends to relationship advice, our daily newsletter has everything you need to sound like a person who’s on TikTok, even if you aren’t.