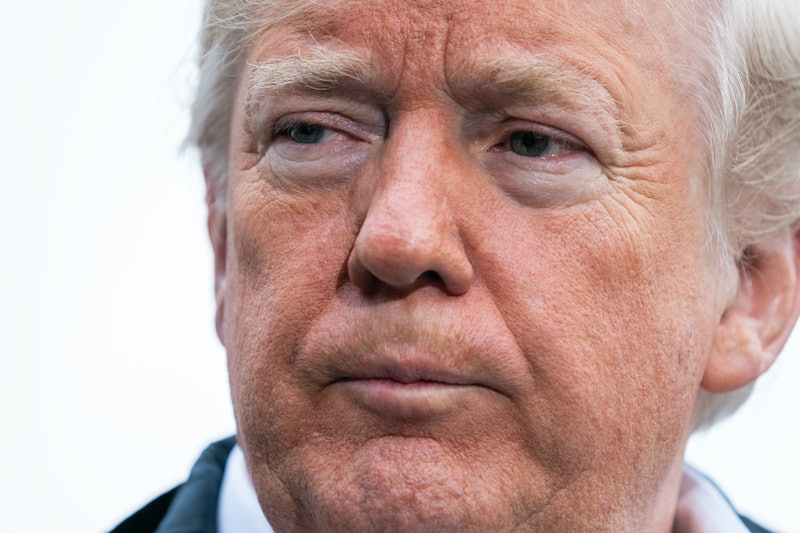 After nearly two years of inquiry, special counsel Robert Mueller's investigation into allegations of Russian meddling in the 2016 election may be wrapping up soon. According to multiple media outlets, Mueller may hand in his final report as early as next week, potentially making for a chaotic week for President Donald Trump. But what can Trump do about the Mueller report anyway?

It's unclear, of course, what Mueller's report might say, and when — or even if — the public will see the special counsel's report. While the Justice Department requires that Mueller submit a confidential report to Attorney General William Barr summarizing his investigation's findings, there's nothing mandating Barr make that report public. According to federal regulations, Barr is, however, required to notify House and Senate Judiciary Committees that the special counsel has concluded their investigation and explain any instances where he may have opted not to pursue an action recommended by the special counsel.

But would Barr move to make Mueller's report public — and if he did, could President Trump stop him? In early January, Trump's lawyer Rudy Giuliani suggested the president might assert his executive privilege in an effort to keep parts of the Mueller report from being made public. "We will look at it and see if the president thinks there is a valid claim and if there is, do we want to make it," Bloomberg reported Giuliani said. "We reserve the right. We don't know if we have to, but we haven't waived it."

More recently, however, Trump has appeared to suggest he might not exercise his executive power to keep the report under wraps. Earlier this week he said it will "be totally up to" Barr to determine if Mueller's report on the Russia investigation should be released to the public. "That'll be totally up to the new attorney general," NBC News reported Trump told reporters Wednesday at the White House. "He's a tremendous man, a tremendous person who really respects this country and respects the Justice Department."

White House Press Secretary Sarah Huckabee Sanders has also recently reiterated the president's intention to not interfere with Barr's handling of Mueller's report. "If he did it the other way, you guys would go crazy," CBS News' Mark Knoller reported she said outside the White House on Friday. "He's following the process and we'll see what happens."

It appears unlikely, however, that Barr would make Mueller's report public. According to the Associated Press, Barr has previously said that while he'd like to make as much information public as possible for transparency's sake, any report made public would be written by him and not Mueller.

That being said, Trump's not likely to remain silent when the Mueller report does drop. The president has already said he plans to release a counter report to Mueller's. "We will be doing a major Counter Report to the Mueller Report," Trump tweeted in December. "This should never again be allowed to happen to a future President of the United States!"

As rumors speculating that Mueller plans to submit his report to Barr soon continue to swirl, the White House has voiced confidence that the special counsel's investigation into allegations of collusion between Russia and the Trump campaign will turn up nothing. "We're seeing the same reports that you are that it's possible that this is coming to a conclusion," The Washington Post reported Sanders said Friday during an interview on Fox News' Fox & Friends. "We feel good about the fact that what we've said all along for last two years will be clear: There was no collusion."

"The idea that President Trump needed to collude with Russia in order to beat Hillary Clinton is frankly laughable," she said. "He was an infinitely better candidate with a better message, and he outworked her. That's why he won. It had nothing to do with Russia."