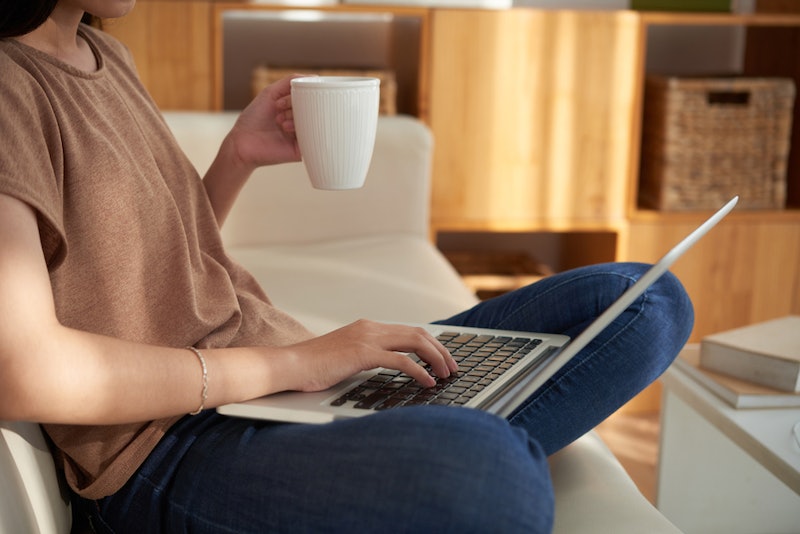 We've all been there: a last-minute change, sudden shift in mood or wave of tiredness means you reach for your phone and say "Sorry, going to stay home." Canceling plans can be deeply satisfying on many levels, particularly if you've over-stretched yourself or don't particularly want to do the activity, but it may also bring distress if you're dropping out against your will. What happens in your brain when you cancel plans, experts tell Bustle, depends on why you're doing it and how you react to canceling plans in general.

It can be difficult to build a neural map of the act of canceling plans. "Neuroscience still cannot pin down neural substrates of specific thoughts," Dr. Regan Gurung, PhD, head of psychology and human development at the University of Wisconsin Green Bay, tells Bustle. However, he says, research gives us some insight into what happens in our brains when we cancel plans — but it depends on why you're cancelling and how you feel about it.

"If having to keep to a plan made is causing the person discomfort — say she has a lot to do or does not really want to meet the person — it is likely there will be increased activity in the emotion centers and in the prefrontal cortex, where most higher level processing takes place," Dr. Gurung says. You'll likely see activity in places like the hypothalamus, which helps regulate our emotions, if you have a strong emotional reaction — positive or negative — to that cancelation. The prefrontal cortex, meanwhile, is the part of the brain that helps with planning and decision-making, meaning that it's weighing the costs and benefits of saying "Not tonight".

Pulling the plug may also give you a sense of happiness, which also manifests in the brain. "Canceling a plan could be accompanied by relief and pleasure which often is caused by more dopamine released in the brain synapses," says Dr. Gurung. Dopamine is a neurotransmitter released in the brain in response to stimuli, including your favorite music. This relief may be more pronounced if you fear social situations because of anxiety disorders; when you have anticipatory anxiety, or anxiety before you encounter something you fear, the amygdala, the center of the brain's fear reactions, lights up. If you cancel, the threat of the social situation is averted, and you may experience a rush of dopamine pleasure plus a reduction in amygdala activity.

However, in some people, the neurology of canceling plans isn't about what happens in the brain. It's more about what doesn't happen. "If it is something a person does often and does not see as an issue, there will be almost no significant change in brain activity," says Gurung. That phenomenon — of easy, barely-noticed cancelation — may be becoming more common, psychotherapist and author Nancy Colier, LCSW, tells Bustle. "In this day and age we are operating on a short-term thinking pattern," she argues. "The concept of commitment isn't important any longer. What's important is speed and immediacy and ease. Keeping a plan when we don't really feel like it is not immediately easy or pleasurable, and we are more and more turning towards what's easiest."

As it becomes easier to cancel plans — and as we suffer more from FOMO (fear of missing out), because we're constantly being fed information about what might be better, more entertaining or more fun elsewhere — our brains may react less to the idea of cancelation in the first place.

In other words, having a strong neurological response to canceling plans is a good thing, because it indicates your care and investment in the plan itself, even if you had negative feelings about it. Relief, unhappiness, distress — they're all natural responses. If you feel nothing at all, though, it may be a good idea to reconsider your own feelings about plans and commitments, with that person and in general. Your brain could be telling you something important.