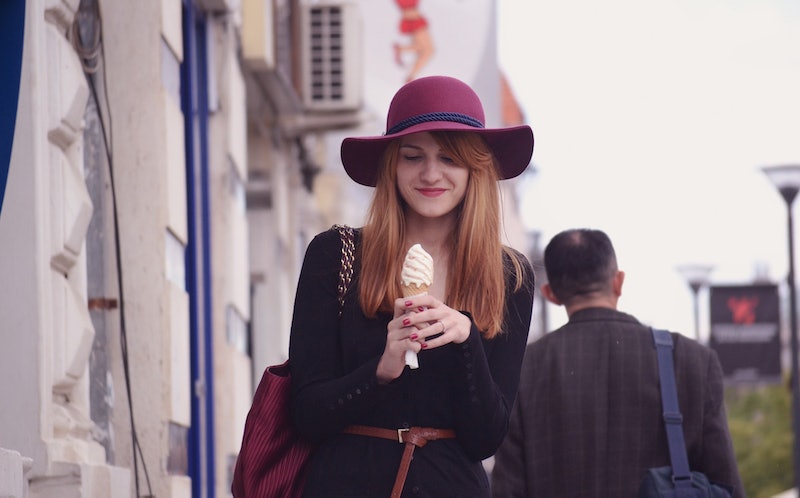 It's a sweltering summer day, and you've gotten your hands on the only antidote: a scoop of sweet, chilly ice cream. Naturally, you start chowing down, but your enjoyment is dashed to pieces when, moments later, you feel what might as well be an ice pick stab through the roof of your mouth into your brain. The question of what causes brain freeze may not be the most pressing scientific inquiry of our time, but it's one of the most universal. Recently, the Texas A&M University Health Science Center published a column explaining why our bodies betray us in such a painful way.

In an article for Vital Record, the center's news site, a Texas A&M College of Medicine professor described what happens during a brain freeze, more formally known as "sphenolopalatine ganglioneuralgia." Basically, it occurs when cold food hits the sphenopalatine ganglion, a bundle of nerves in the back of your palate. According to Dr. Stephanie Vertrees, these nerves then "relay information that stimulates a part of the brain to have a headache." Once these signals reach your brain, et voila! A brain freeze has you clutching your head in agony, ice cream lying forgotten on the ground. Or, if you have a higher pain tolerance than this writer, you experience a brief, intense headache. Either way, that ice cream is a little less delicious now.

More specific research on brain freezes is thin on the ground, so the exact mechanism isn't well understood. However, a study in 2012 found that when participants drank a bunch of ice water, blood flow to an artery in the front of their heads increased just before they reported a headache. The study's lead researcher told Motherboard that he believed the cold water caused their blood vessels to expand, and the increased pressure in the brain was interpreted as pain. Other researchers have also proposed that the blood vessel dilation stimulates the trigeminal nerve, which is associated with headaches.

Oddly enough, not everyone experiences brain freeze. In fact, studies generally show that it happens to about one third of participants — the rest can guzzle ice water until the cows come home without any problem.

There's been some evidence showing that people who get migraines are more likely to get brain freezes, too, but other studies have disagreed. That being said, some people swear that inducing a brain freeze can prevent a migraine. So next time you feel a headache coming on, you might want to grab something cold and go to town — even if the brain freeze trick doesn't work for you, at least you had an excuse to eat ice cream.