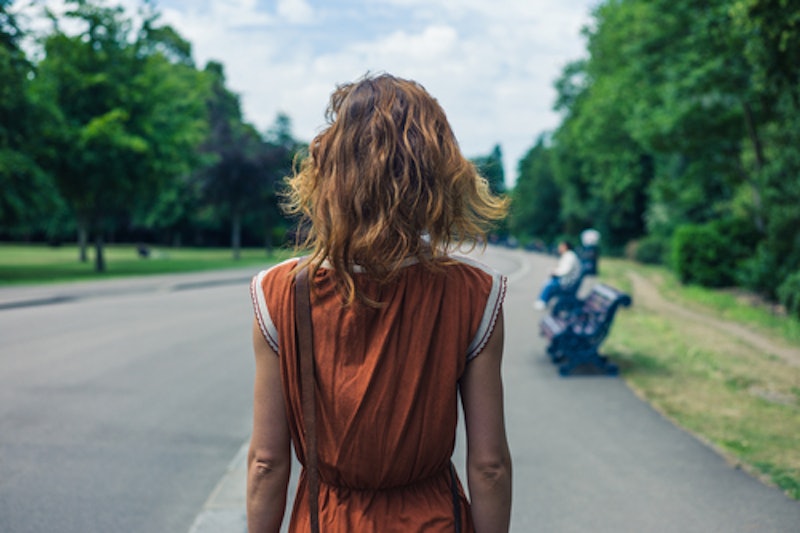 Though we often think of it as an exclusively male issue, hair loss happens to women, too. While we all probably wouldn't be too shaken if we shed hair from our underarms and never got it back, female hair thinning is a very real problem, and many women lose an excessive amount of hair from their heads for a wide variety of reasons — from stress to an inherited genetic condition. We've publicly discussed basically every aspect of aging at this point — for instance, we all finally admit that having sex into your 60s and 70s is basically commonplace — but the reality of female hair loss, and the fact that is happens to many women as they get older, remains taboo. Can we talk about what's really happening when our hair thins?

In many cultures, women's hair is seen as a powerful symbol of femininity and strength. Lucinda Ellery penned a thoughtful reflection on the links between women, their hair, and their political and sexual power throughout the centuries for HuffPost. Ellergy notes that men can go bald and still be considered sexy and charming by the culture at large, but when we see a bald woman, we often assume that she is either undergoing chemotherapy or proving a political point, a la Robin Tunney in Empire Records. But given that, according to the American Hair Loss Association, around 40% of women will experience hair loss in their lifetimes, it seems there's an almighty societal mismatch between the fantasy of female hair and the realities.

So don't be scared if you suddenly discover more clumps on your hairbrush in the morning; you're far from the only one experiencing this. And science is here to help. Here's what really happens when hair begins to thin or fall out — and what can help.

How Does Hair Loss Happen?

Though it may seem like all of your hair is growing all the time, your hair is actually more like a series of fields in a farm, with crops at different stages of growth. At any given moment, different sections hair are going through one of three growth phases. In the anagen phase, the follicle allows the hair in it to grow; in the catagen phase, the hair follicle shrinks, and growth stops; and in the telogen stage, the hair in the follicle falls out, allowing the follicle to rest before growing another hair. This follicle cycle is a natural part of hair life, which is why a little shedding is always OK — but on a young scalp, up to 80% of follicles are in the anagen, or growth, phase at any given time.

Hair thinning (and eventual permanent hair loss) is often caused by a process called follicular miniaturization. Normally, when the follicle enters the telogen stage and sheds its hair, you'd expect it to grow a hair of similar size when it goes back into the anagen phase. In people experiencing hair thinning and loss, though, that doesn't happen. Instead, the hair that regrows gets finer and finer and has a shorter lifespan. Eventually, the follicle stops producing hair altogether.

And there's a difference between men and women when it comes to the most common cause of thinning. Men generally get male pattern baldness, which tends to proceed from either the hairline or the crown of the head; female pattern baldness, on the other hand, is characterized by the thinning of the hair on the front third of their head. But both forms of baldness are classified as androgenetic alopecia, a genetic sensitivity that leads to thin ponytails and bald, shiny scalps.

Numerous illnesses can also contribute to hair loss. "Hair loss in women can definitely be a sign of a hormonal imbalance," Dr. Rocio Salas-Whalen, triple-board certified endocrinologist and founder of New York Endocrinology, tells Bustle. "Specifically, thyroid disease can cause generalized hair loss. Both hypo- and hyperthyroidism can contribute to this. In polycystic ovary syndrome (PCOS) we also see hair loss, this is mostly as a male baldness pattern due to the excess androgens seen in PCOS. Patients with eating disorders can have hair loss due to the poor nutrition. Pregnancy is a major cause of hair loss in women and during post-partum. Patients with hormonal IUDs also see hair loss as a side effect." Turns out a lot of different conditions can contribute to hair loss over a lifetime.

Why Does Hair Thin?

If the culprit behind hair thinning is usually androgenetic alopecia, the true cause is typically your genes. While it's not yet fully understood, male and female pattern baldness appears to be caused by an inherited sensitivity to a chemical called DHT, which is naturally produced in the body as a by-product of testosterone. If you inherited a specific gene combination, your follicles will be exceptionally sensitive to your DHT levels — and at a certain point, they will eventually shrink and stop working.

But that's not the only answer — at least, not for women. Most men can track their baldness to androgenetic alopecia. But there are also a host of other factors that can also cause baldness and hair loss, and some of them are specific to women. The Pill, auto-immune disorders, chemotherapy drugs, anemia, and even over-dyeing hair can all contribute to hair loss.

The old idea that your hair falls out overnight isn't an old wives' tale, either. There's a condition called telogen effluvium where the body, after undergoing severe stress, suddenly puts all its follicles into the telogen stage at once, and hair promptly falls out. Causes can include childbirth, a serious infection or an eating disorder — but in most cases, the condition is temporary, and the hair will grow back once the stress abates and the follicles are allowed to enter the anagen phase again.

And then there's a specific kind of hair loss caused by frequent pulling of hair, called traction alopecia. If you're constantly putting your hair under severe stress by braiding it, always having it up, or putting extensions in it, traction alopecia could result.

Are There Any Cures?

OK, here's where it gets a bit tricky. The causes behind hair loss in women are so varied that it can actually be reasonably hard to pin down what exactly has happened. Men can pretty easily point to their genes, but for women, it could be genes or a reaction to anything from over-dyeing their hair to a sudden hormone fluctuation (menopause, for example). Follicles are sensitive to hormones, though scientists are not entirely sure how or why.

This is why the chances are that, if your hair begins falling out, your doctor will just tell you to wait and see if it grows back, try to reduce your stress, and put away the bleach for a bit. But while their advice is well-intentioned, they may not actually be on the forefront of hair loss solutions.

Rogaine and similar products use a chemical called minoxidil applied directly to the scalp, which is supposed to stimulate anagen growth in follicles. Researchers at Sanford-Burnham Medical Research Institute released a study claiming they'd found a way to create new cells that encourage hair growth, transforming stem cells into dermal papilla cells that boost follicle activity. The experiment hasn't been conducted on humans yet, though, so we're still a way off from stem cells being a practical solution to hair loss.

The best option when you notice hair loss? Look at your family's history of hair thinning in women, regulate your nutrition, lower stress levels and go see your doctor to talk about how your hormones might be affecting things.

"If there is an underlying condition causing the hair loss, treating it will definitely be the cure," Dr. Salas-Whalen tells Bustle. "The most important thing to do if a woman feels her hair loss is not normal is to see her primary care doctor and to discuss any other possible symptoms." And, Dr. Salas-Whalen adds, it's important not to worry. "Hair loss in women does occur and most of the times is due to an underlying condition. The most important thing to do is to discuss with their medical provider."