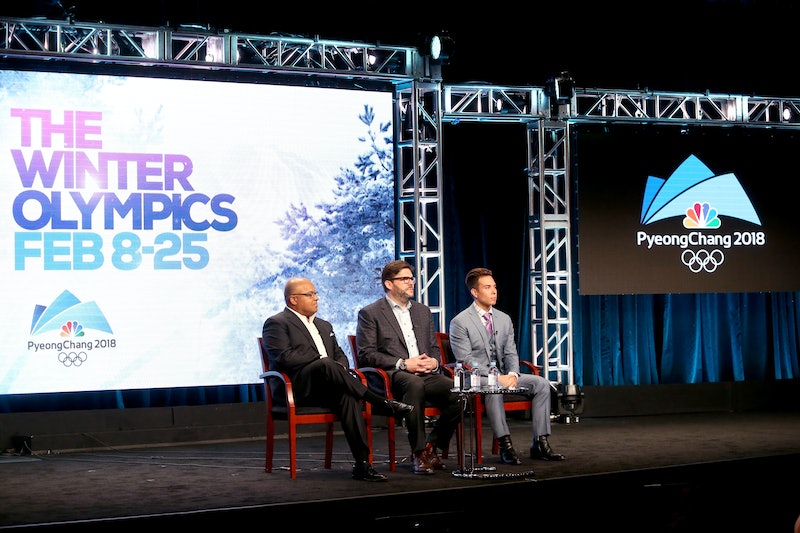 On Friday, Feb. 9, the opening ceremony at PyeongChang Olympic Stadium will finally raise the curtain for the much-anticipated 2018 Winter Olympic Games. Viewers in the United States will need to flip to their local NBC channel for the 2018 Winter Olympics Opening Ceremony or go online if they want to watch the welcome party spectacular.

NBC has been broadcasting the Winter Olympics since the 2002 games in Salt Lake City. The network will cover the opening ceremony live, all of the sports events (the Olympics lasts Feb. 8-25), and finally the closing ceremony. If you want to watch the Olympics on television — old school! — you can enter your zip code on NBC Sports to find your local Olympics channel. If you want to stream it live, you can go to NBC's Olympics website.

Just be sure to take the time zone difference into account as South Korea is 14 hours ahead of New York, 15 hours ahead of Chicago, and 17 hours ahead of Los Angeles. The opening ceremony will begin at 8 p.m. local time, so 6 a.m. for those of you on the East Coast. You can also expect frequent updates from Twitter accounts like @NBCOlympics, @Olympics, and @PyeongChang2018.

The 2018 Winter Olympics opening ceremony is following an itinerary similar to the 2014 Winter Olympics in Sochi, Russia. Moon Jae-in, the president of South Korea, will make an entrance. After playing the South Korean national anthem, there will be the Parade of Nations with all the participating athletes and each country's flag bearer. Team USA athletes will be decked out in Ralph Lauren.

Following the parade, there will be a symbolic release of doves and Moon will declare the games open. (Sad fact: Real doves perching on the Olympic cauldron at the 1988 opening ceremony in Seoul met an early death when the cauldron was lit. After this horrifying incident, the Olympics altered the procedure to avoid lighting any more birds on fire.)

Once the Olympic flag is raised, athletes, officials, and coaches will take the Olympic oath. Then in the final act of the torch relay, the last torch bearer — who will most likely be a celebrated figure in South Korea — will light the Olympic cauldron. The opening ceremony then ends in artistic performances, and as past ceremonies indicate, probably a grand display of fireworks.

And while it's no bomb cyclone, spectators at the PyeongChang Olympic Stadium will likely be swaddled up as South Korea's Olympic organizers have been fretting over whether the venue, which lacks a roof, will be too cold for spectators. Once the ceremony is over, let the games begin! (Technically the games will have begun one day prior, though.) Medal events in biathlon, cross-country skiing, and short-track speedskating take place on Day One already, and Team USA has athletes competing in all three.

Early in January NBC unveiled its set designs for the 2018 Olympics. A 3,500 square foot geodesic dome, inspired by the PyeongChang mountainside, will be used as the main studio for primetime and light-night programming. NBC will also use a “winter lodge” set on the rooftop of the International Broadcast Center, which overlooks the ski jumping venue at Alpensia Ski Resort as well as the Taebaek Mountains. Former figure skaters, the fabulous duo of Johnny Weir and gold medal Olympian Tara Lipinski, will return as commentators on NBC.

Your local newspaper as well as most mainstream news outlets online will be keeping a daily medal tally because when you have the best athletes in the world gathered in one place, there's nothing like competitive sports to turn people into patriots. Meanwhile, there's at least one Team USA superfan we're hoping to hear from again: Leslie Jones, where you at? The Olympics won't be the same without you.