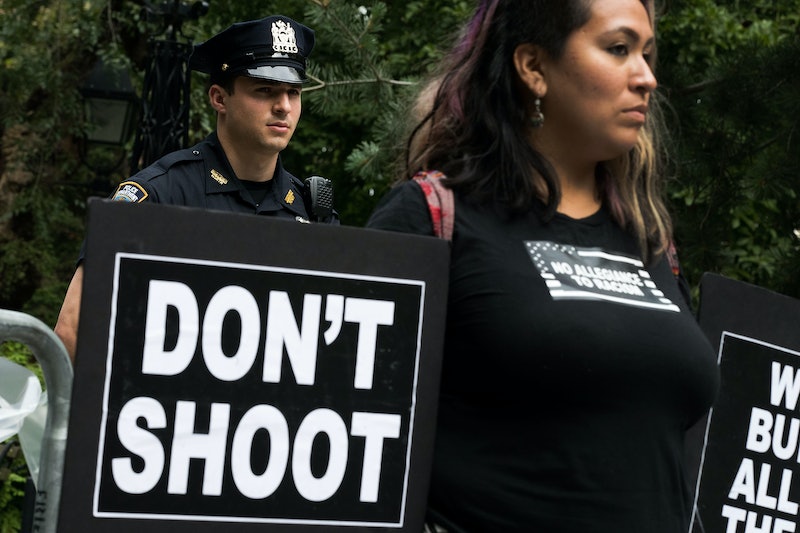 On Sunday, a pregnant African American woman was killed in front of her children by two Seattle police officers after she called 911 about a burglary. Video footage recorded by onlookers captured one of the officers telling her "you're not going to get shot" — right before shooting her. This moment before Charleena Lyles' death exemplifies why distrust for the police is so high among racial minorities, particularly black Americans and Latinos.

According to reports, Lyles brandished a knife at one point during the encounter and was struggling with mental health issues, her family said. She was described as "tiny" and physically nonthreatening enough to have been easily overpowered by the two officers without having to be shot to death. Loved ones asked why other measures weren't taken before resorting to the use of guns. “Why couldn’t they have Tased her?” asked Lyles’ sister, Monika Williams. “They could have taken her down. I could have taken her down.”

The issue of tension and lack of trust between law enforcement officials and racial minorities has been studied, debated, and analyzed for years. Among other reasons, suspicion of police officers often stems from the high rate of racial profiling, the frequent use of excessive force against minorities, officers' reported tendency to lie about the details of police brutality incidents, and misleading or explicitly lying to people they stop about their rights.

A 2014 survey by the Pew Research Center revealed that just 36 percent of African Americans felt confident that police authorities treat races equally, compared to 71 percent of white Americans who held that conviction. In a previous study, 70 percent of African Americans reported feeling incidents of police misconduct are handled poorly in the U.S., compared to just 27 percent of whites. The long list of statistics and studies repeatedly finding that minorities are more at risk of being stopped, arrested, or brutalized by police — perhaps that would explain why such a difference of perception exists between black and white Americans.

A BuzzFeed report from January examined 62 cases from 2008 to 2016 in which video evidence contradicted the official accounts police officers gave to describe incidents involving use of force, some resulting in the deaths of the subjects stopped by officials. Of the 62 cases, 22 saw charges filed against the authorities, and only nine ultimately led to convictions. A 2010 study conducted by the National Police Misconduct Statistics and Reporting Project analyzing 2,541 reports of police misconduct found that out of roughly 592 cited cases involving excessive force, only an estimated 59 led to criminal convictions.

The issue of lack of accountability among law enforcement officers also has its roots outside the actual police departments. A May 2016 report by the Chicago Tribune found that in over a dozen cases, judges and prosecutors rarely impose any kind of consequences on police officers who provide false witness testimonies in court. A report recommending police reforms for the city of Chicago explicitly found that "Although some judges will go on record expressly finding that a police officer's testimony is not credible, explicit findings are the exception."

Given the pervasiveness of reported cases in which police officers face no repercussions despite concrete evidence of misconduct and brutality — particularly when victims are racial minorities — it isn't difficult to see why suspicion of law enforcement officials is so high within non-white communities.

In regards to the Seattle Police Department specifically, a 2011 report found that the city's law enforcement officers regularly used excessive force. Although subsequent reforms to the department succeeded in lowering the number of incidents involving moderate and high-level force by a staggering 60 percent, cases like that of Lyles' prove that there is still much improvement to be made.

The officers who shot Lyles were both armed with less lethal types of weapons, meaning a different outcome not involving her death could surely have transpired. Regardless of whether she brandished a knife, the officers had multiple options they could have used to apprehend Lyles — instead of shooting her, as they claimed they wouldn't.