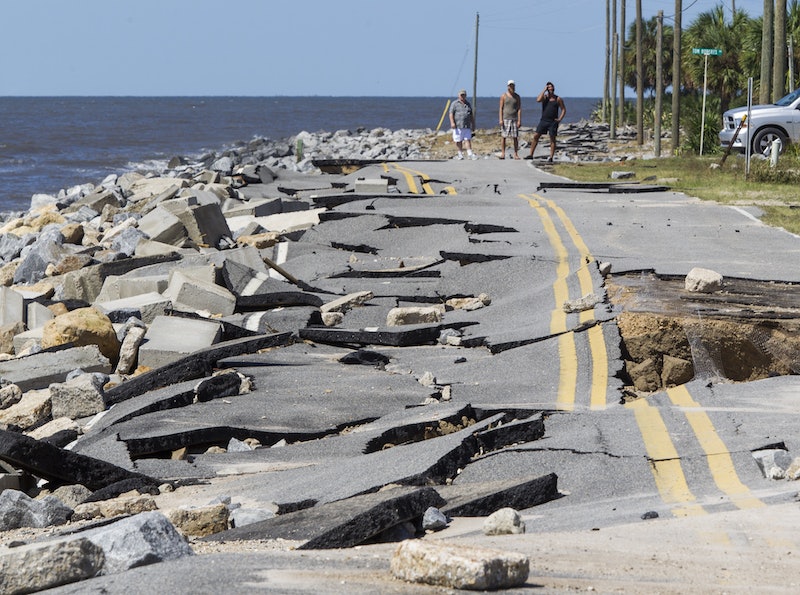 As Hurricane Harvey draws closer and closer to the Texan coast, meteorologists are throwing around a lot of words to describe it and the power that it packs. Those storm categories actually have specific meaning, though, so you can actually predict what kind of damage a Category 2 hurricane causes. Hurricane Harvey is currently a Category 2 storm, so coastal cities are bracing for that — but it could get close to that line between Categories 2 and 3 by the time that it makes landfall.

The National Hurricane Center, which is run out of the National Oceanic and Atmospheric Administration, classifies hurricanes using the Saffir-Simpson Hurricane Wind Scale. The scale places storms into categories by the speed of their sustained winds — so, the winds that are continually blowing within the storm, not just the occasional faster gusts. What makes the scale really useful, though, is that it estimates exactly what kind of damage each category of storm is likely to cause. What you can expect for a Category 2 storm reads as follows, and it doesn't paint a pretty picture:

Extremely dangerous winds will cause extensive damage: Well-constructed frame homes could sustain major roof and siding damage. Many shallowly rooted trees will be snapped or uprooted and block numerous roads. Near-total power loss is expected with outages that could last from several days to weeks.

Just in case you're the rare person who can imagine what different wind speeds feel like, Category 2 storms have sustained wind speeds of 96-110 mph. That can be hard to actually visualize for most people, but you might at least remember some of the other famous Category 2 storms if you lived in the vicinity. If you're a North Carolinian, for example, you might remember Hurricane Floyd, the most destructive storm in the state's history, which was a Category 2 hurricane. Floyd brought 60 hours of rain in some areas and massive flooding, which killed 52 people and caused over $6 billion in damage to homes and infrastructure.

The other thing about a Category 2 storm is that it's not far from becoming a Category 3 storm — and some projections of Harvey predict that it could reach Category 3 levels by the time it hits the coast. Everyone remembers the most famous Category 3 storm, which burst New Orleans' levies and threw the whole area into turmoil for months: Hurricane Katrina.

This isn't meant to be alarmist — it just needs to be clear that even though Hurricane Harvey isn't getting up to the truly scary Category 4 and 5 levels that the country doesn't witness very often, it's still a very dangerous storm. So far, emergency services and disaster relief mechanisms are all being put into place, in preparation for the worst. With hurricanes, it's always best to remember what's also one of the most important principles in sports — you've got to have a good defense.