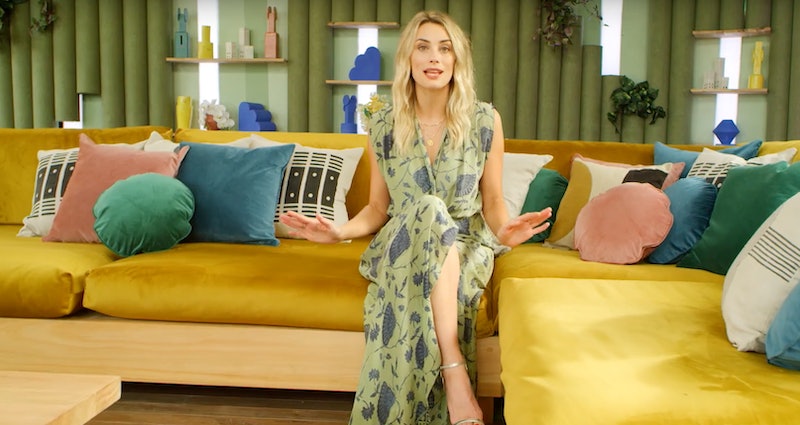 If you haven't been keeping up with the dating show that's already swept the U.K., you're seriously missing out. Love Island, the American version of the British show of the same name, is headed to CBS this week with a special 90-minute premiere, but what follows is not the typical weekly lineup you might be used to with other reality shows — there's a whole lot more to love. Love Island U.S. will air every weeknight from July 9 to Aug. 7, according to TV Guide. Yes, you read that correctly — every single weeknight. That kind of packed schedule will definitely make for a dramatic summer.

For the uninitiated, Love Island is a dating competition show in the U.K. that ran in 2005 and 2006 with British celebrities as its stars, and was revived in 2015, per the same article. That revival is still going strong — Vanity Fair reports that it's ITV's most-watched show in history — and apparently some TV execs think it'll be a hit on our side of the pond, too. The premise is very Bachelor in Paradise — an ever-changing group of singles is thrown into the tropical paradise and urged to couple up quickly or risk elimination. There are challenges and games throughout, and in the end, there's a grand prize for the last couple left standing.

Apparently the people behind the show think that part of its appeal is the high frequency with which the show's episodes air. “It’s not like you have to wait a week to get your fix,” host Arielle Vandenberg told Vanity Fair.

Executive producer David Eilenberg told Entertainment Weekly that the twists and turns of Love Island are meant to mirror real-life dating, so hopefully there will be no shortage of intense content to fill those five nights a week. The fact that some of the previously coupled up singles can be tempted by consistent new arrivals gradually added to the show, and actually ditch their initial romance to change partners, makes it all the more real.

"I think it resonates with young people and the way the dating world is," Eilenberg says. "One thing we hear about dating apps is you’re constantly contending with FOMO and that some hotter better person might be right around the corner — so when do you actually commit? The mechanics of this show bring that conundrum to life."

The trailers look downright fascinating. The show has everything — gorgeous beaches, horrible betrayals, sand and surf, heartbreaking sobs. It's almost too much to handle. Contestants can be dumped by text, dumped by other couples, and even dumped by viewers' votes. It's madness, but it's magnificent.

So, now it's time for everyone to clear their schedules. You thought a weekly show was too much TV to keep up with? Welcome to near-constant Love Island episodes for one entire month. Hey, now you have an excuse to dip out on parties early or even avoid them altogether. Pour a glass of wine, get your friends around to gossip, and revel in the earth-shaking drama that you can watch comfortably from your couch.

More like this
Twitter Has *Many* Thoughts On Amber & Ikenna’s Dumping From ‘Love Island’
By Frances Stewart
Michael Owen Sheds Light On Why Gemma From 'Love Island' Is Oh So Serious
By Maxine Harrison
Howard Stern's Net Worth: Is He The Richest Man In Radio?
By Hugh McIntyre
Only 3 Of The One That Got Away Couples Seem To Still Be Together
By Brad Witter
Get Even More From Bustle — Sign Up For The Newsletter