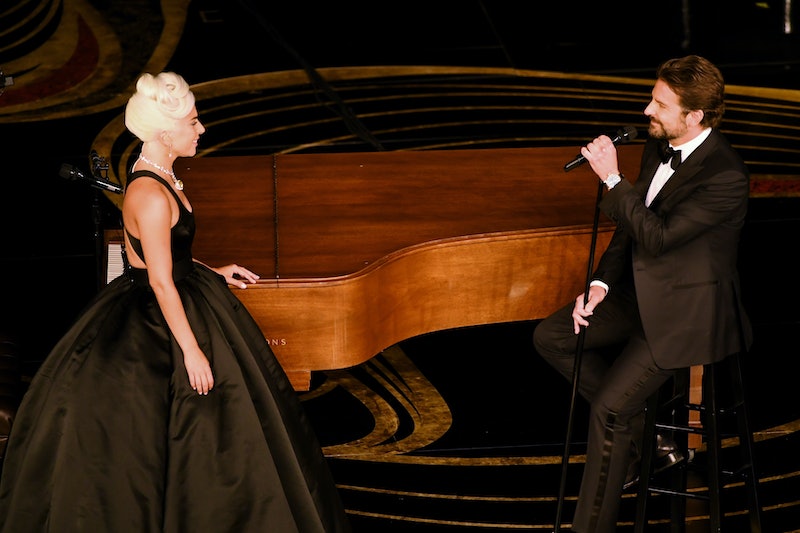 Bradley Cooper and Lady Gaga had countless eyes on them when they sang during the 2019 Oscars. But the two of them were perfectly comfortable just looking at each other. And after their "Shallow" duet, fans might be wondering what Bradley Cooper said to Lady Gaga before the 2019 Oscars to turn out such a great performance. According to Gaga, the actor and director was giving his costar a pretty sweet note about what to think of while they sang together.

During a conversation with reporters in the Oscars press room, Gaga said that the day before, during their last rehearsal, Cooper told her to think of "joy" while they sang "Shallow," as reported by People. As far as what the actor-director said on the night of their performance, that's something that, so far, is remaining between the two of them.

"'One of the hardest things in life is to be brave enough to be yourself. I wish to everyone that is going to that celebration to feel a joy inside of them,'" Gaga said in the Oscars press room. "That's actually what Bradley said to me yesterday, right before we did our last rehearsal for this performance of 'Shallow.'" ... He said, 'Let's just drop a little bit of joy.' And I said, 'Okay.' And turns out, joy did a whole lot for me."

"Joy" might not be the first word that comes to mind when fans think of A Star Is Born. It's a sweet movie that includes some romantic moments, but it's also pretty sad. Jackson (Cooper) struggles to accept Ally's (Gaga) success, and he causes her plenty of pain amid the happier moments in their relationship. And the movie ends — spoiler alert — with his death by suicide.

But "Shallow" itself is a joyful song, in essence. As the song's writers noted in the press room interviews, Ally first shares the "Shallow" lyrics when she and Jackson are in the parking lot. It is a joyful moment, even if their relationship becomes a lot more rocky after that. And in terms of the Oscars performance, it looks like Cooper and Gaga were channeling that initial spark and loving joy.

It's clear from the duo's Oscars performance that there's a closeness between the two stars, even if it's not a romantic one. And it looks like the power of Cooper and Gaga's chemistry-filled duet was impossible to deny for those in the room. Reporters who attended the Oscars tweeted that Gaga and Cooper got a standing ovation for their "Shallow" performance, not just right after they performed, but later when, during commercial break, they returned to their seats in the front row.

Fans who watched the show at home also shared their praise for the emotional performance. And a number of people suggested that the duet moved them to tears (hopefully in a good way).

While Gaga and Cooper won fans over with their characters' relationship, their Oscars performance was all their own. Bradley Cooper announced before the awards show that he wouldn't be singing as Jackson, and Gaga added her own style to the song on Sunday night, too. The song brought more than a "little bit of joy" to viewers this weekend, and it's easy to see why "Shallow" has already become such a beloved song.