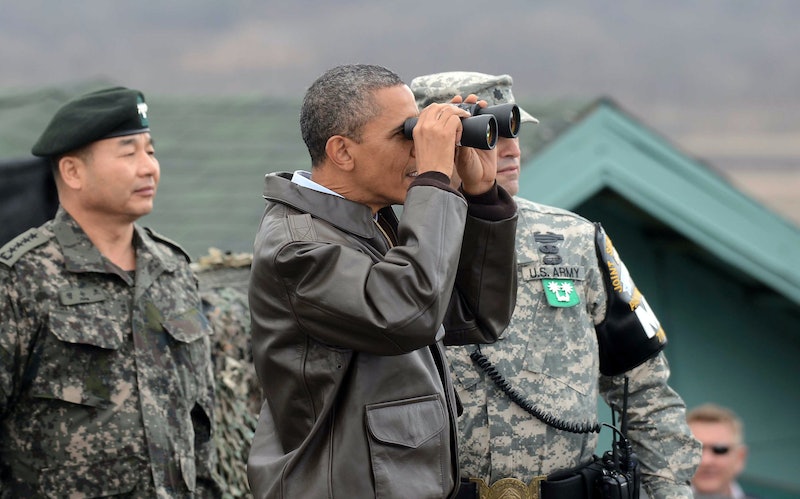 American presidents have had varied relationships with North Korea's ruling family, at times employing sanctions, offering humanitarian aid, and most recently, engaging in open discussions. The end goal has been the same for decades: denuclearize the Korean peninsula. President Trump made history last June when he met the supreme leader, Kim Jong-Un, but what did Obama do about North Korea? Turns out, his approach was pretty different.

Prior to the Singapore summit, Trump's relationship with North Korean leadership could easily be described as contentious — everything from hurled insults to threats of nuclear war. And despite Trump's recent insinuations otherwise, all eight years he was in office, President Obama's approach to North Korea was fairly cautious. The New York Times reported in 2016 that the administration's tack, once called "strategic patience," was characterized by gradually increasing sanctions, and quiet espionage in hopes that the authoritarian nation would eventually come to the table for negotiations.

Obama-era sanctions included a blanket trade and investment ban, and freezing of North Korean government property within the U.S. In 2016, the administration also introduced individual sanctions against specific North Korean officials associated with "serious human rights abuses and censorship." North Koreans on the blacklist, including Kim, had their assets frozen and were additionally barred from transactions with American citizens.

That outcome never really panned out. North Korea continued to expand its weapons program and test missiles. In 2014, the country even launched a cyber attack against Sony Pictures in retaliation for James Franco's and Seth Rogen's film, The Interview, which poked fun at the Kim regime. After the death of Kim Jong-Il, there was some hope that his son would start to ease restrictions, but there was no such luck. In September 2016, a few years after the younger Kim took power, North Korea confirmed it had completed its fifth nuclear warhead test — an unprecedented step — in response to "U.S. hostility."

Obama remained consistent and firm in his rhetoric against North Korea, despite the non-confrontational approach to policy. "We don’t use our military might to impose these things on others, but we will not hesitate to use our military might to defend our allies and our way of life," he said in 2014 according to Reuters, following a mid-range missile launch into the sea east of South Korea.

He also repeatedly insisted that North Korea had to be stripped of its nuclear capabilities before diplomatic or trade connections could be built. "To be clear, the United States does not, and never will, accept North Korea as a nuclear state," he said after the September 2016 missile launches, according to The Times.

Even so, North Korea's repeated displays of aggression meant that Obama never got to the point of negotiation. "Since I came into office, the one thing I was clear about was, we’re not going to reward this kind of provocative behavior. You don’t get to bang your spoon on the table and somehow you get your way," he told the United Nations in 2013.

And even though Trump is the first American leader to meet face-to-face with a North Korean leader, he's definitely not the first to be asked. "North Korea has been seeking a summit with an American president for more than twenty years," Jeffrey Lewis, director of the East Asia Nonproliferation Program at Middlebury Institute of International studies, wrote on Twitter in the run up to the Singapore summit. "It has literally been a top foreign policy goal of Pyongyang since Kim Jong Il invited Bill Clinton."