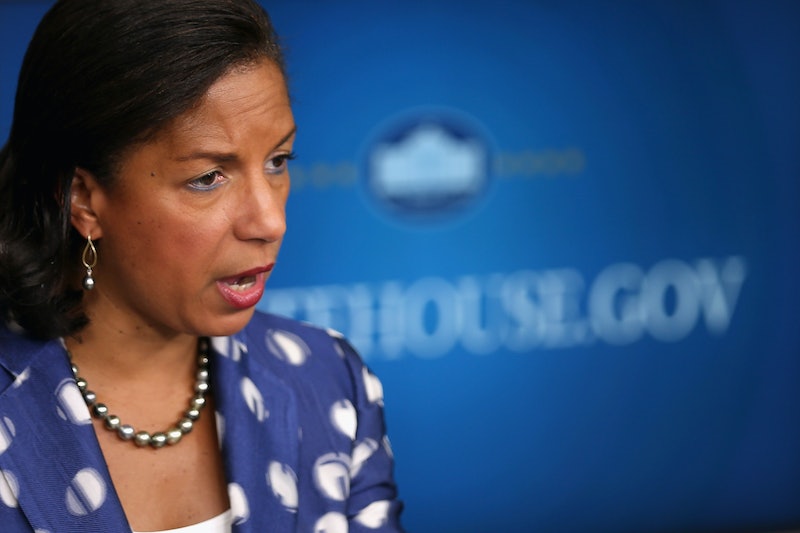 Thanks to President Trump's interview with The New York Times, former national security adviser Susan Rice is back in the news. In what seems like an attempt to change the story, Trump tried to pin Watergate-like charges on her. "I think the Susan Rice thing is a massive story. I think it’s a massive, massive story. All over the world," Trump told The Times Wednesday. "It’s a bigger story than you know," he added, promising more information would come but offering no details. But what did Susan Rice actually do? It all has to do with Trump's Russia connections.

Essentially, Trump wants to deflect from the investigation into his campaign's connections with Russia by blaming the whole thing on Rice. If he could also vindicate his claims that Obama "wiretapped" him, all the better. There's just one problem, Rice didn't do anything wrong. What actually happened, according to what Bloomberg reported, is that Rice sought out redacted names of "U.S. persons in raw intelligence reports on dozens of occasions that connect to the Donald Trump transition and campaign."

In other words, she had seen reports about people associated to Trump's campaign and transition that were accidentally surveilled because of their dealings with Russian government officials and nationals. Because they're U.S. citizens, there names are typically edited out. Rice asked to get the real names, not the blacked out version that is first shared by the intelligence community. This is called "unmasking."

Rice went on MSNBC to explain her actions — and they are legitimate. “The allegations that somehow Obama administration officials utilized intelligence for political purposes are absolutely false,” Rice said, explaining that it is necessary to do her job in case there are foreign countries trying to manipulate the U.S. political process.

Furthermore she said that she didn't leak any names. "The notion that, which some people are trying to suggest, that by asking for the identity of an American person that is the same as leaking it, is completely false," Rice told MSNBC. "There's no equivalence between so-called unmasking and leaking. The effort to ask for the identity of an American citizen is necessary to understand the importance of an intelligence report in some instances."

As Vox explains, that's true according to national security experts. They pointed to tweets from experts on both the left and the right that claim Rice's actions are completely proper. "Nothing in this story indicates anything improper whatsoever," wrote Susan Hennessey of the Brookings Institute. Nada Bakos of the Foreign Policy Research Institute agreed. "She was the National Security Advisor reading a report of foreign officials discussing US persons coming into WH, this isn't odd or wrong," Bakos wrote.

So ultimately it seems like Rice did her job, part of which was identifying individuals who pose a threat to national security. It just so happens some of those in conversation with foreign actors happened to be on Trump's campaign or transition. That's not something she should be answering for. It should be Trump and his team.

So keep in mind that this Rice story is, once again, a big distraction.