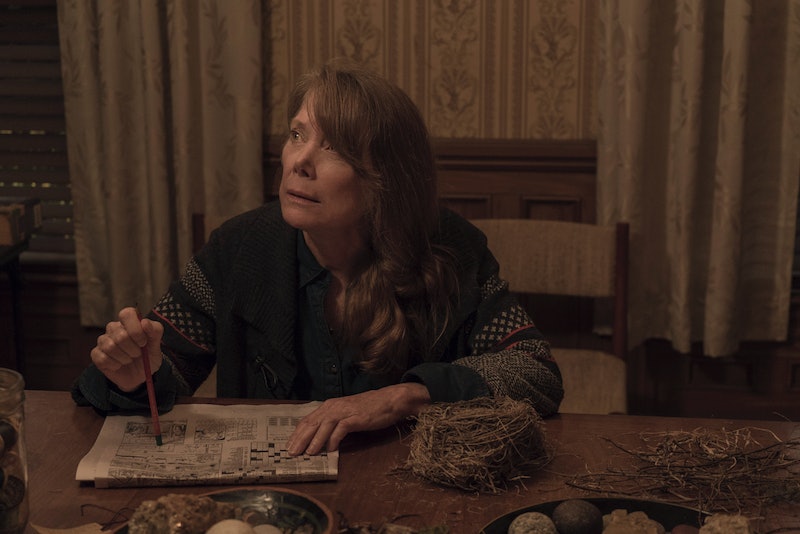 Spoilers ahead for Castle Rock Season 1, Episode 6. While the Kid's identity is still unclear on Castle Rock, his influence — intentional or not — is getting worse. What happened to Ruth on Castle Rock? Did the Kid kill her, or manipulate her into harming herself? Wednesday's episode ends with her fate up in the air.

Throughout the episode, the Kid watches some Deaver family videos that Henry's adopted father took of them in the woods together. Maybe he's just curious, but that could be a clue as to what he's up to with the Deavers. He then sends Alan Pangborn on a mission to retrieve the car that Dale Lacy drove into the lake. That will help him help Ruth, the Kid says. "Time is her enemy," he insists.

Was it a real request, or a wild goose chase to give the Kid time alone with Ruth? Later in the episode, after Bill explores the house and puts the ominously-titled "The Sun Ain't Gonna Shine Anymore" by The Walker Brothers on the record player, Henry arrives with his son Wendall and takes the Kid to Juniper Hill Psychiatric Hospital.

The moment the Kid arrives on the Juniper Hill premises, a crow falls dead out of the sky. Later, we learn that fires have broken out, and the Kid has left the facility. He comes back to the Deaver house and casually strolls in, taking off his shoes and hanging up his jacket. Or at least, that's what the order of events seem like.

When Pangborn returns, he finds the Kid sitting outside of the house, bleeding from his hand. Inside, there are clear signs of recent chaos. The record player is skipping, the stove is on, the fire alarm is sounding, and neither Ruth nor Wendall are anywhere to be found. There is broken glass on the floor and furniture overturned too. Clearly something bad went down.

"There will be a monument to Gordon Lacy," the Kid says when Panghorn approaches him. "To everyone who helped put me in that cage." Does he regret whatever happened to Ruth? This character is so mysterious — his actions are even less clearly explained than his motivations.

What does the Kid want with Ruth, of all people? Is there a chance that the two are related? They do have similar noses, and Ruth seemed to either recognize him or recognize something in him when he was lurking around the house earlier in the episode. She regarded him with interest. Maybe Sissy Spacek and Bill Skarsgård weren't just hired because of the Stephen King credits on their IMDb pages. Maybe their physical similarities matters too.

There's also a small possibility that these scenes are happening out of order, or not exactly how they are being presented to us. The audience views the scene where the Kid enters the house through Ruth's perspective — and she has just described her Alzheimer's disease to Wendall as experiencing time in a less than linear fashion.

Hopefully Pangborn can find Ruth, because Henry has other things to worry about at the moment. He is currently trapped, locked in an isolation chamber called "the filter" by two fanatics who went on about a "schisma" and may or may not have worshipped with Henry's father in the woods. Plus, Molly confessed to Henry that she killed his father? Things are really ramping up on Castle Rock — and not only are the mysteries unsolved, but these characters are in a lot of real danger.