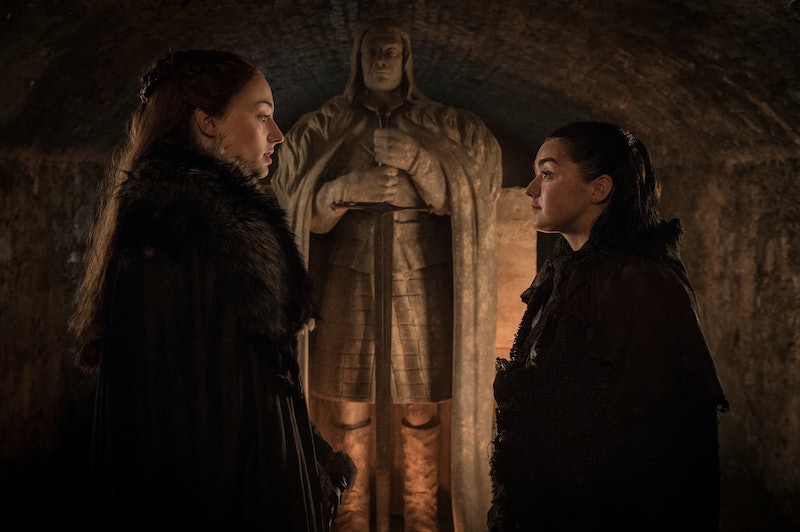 The Stark siblings have only been reunited for one episode, and Littlefnger is already trying to start something. What letter of Sansa's did Arya find on Game of Thrones? No surprises here, the note proves that Petyr Baelish might be turning on Sansa.

It was easy for Arya to spy on Littlefinger and his sneaky errands in Winterfell. Almost too easy, wouldn't you say? As it turns out, Littlefinger tracked down a letter that Sansa had written to Robb Stark way back in Season 1. The letter informed them of King Robert's death, and begged the then King in the North to pledge fealty to Joffrey.

Here's the thing, though. Sansa wrote that letter under duress. She was being threatened and manipulated by Cersei Lannister. She was trying to save her father's life, as well as her sister's and her own. In fact, Robb and Maester Luwin (and later Catlyn Stark as well) instantly suspected this and paid what on paper looks like Sansa's betrayal no mind at all.

That said, will Arya recognize the truth? She was busy with "dancing lessons" at the time, and left King's Landing soon after. She doesn't know the nature of Cersei's relationship with Sansa. In Sunday's episode, the girls got close to fighting over leadership styles and thirst for power. It was civil, but could be foreshadowing a larger conflict.

One would hope that Arya would take Littlefinger's recovered letter directly to her sister and hear her side of the story. It's also possible that Arya is playing along with Littlefinger's game and allowing him to believe that he is turning her against Sansa.

Clearly Littlefinger is trying to drive some sort of a wedge between the Stark sisters, first with the dagger and then with this. He's like the world's worst Santa Claus, dolling out passive aggressive gifts meant to subtly tear a family apart.

Why use this ancient letter as evidence? Is this supposed to prove that Sansa is secretly loyal to Cersei and House Lannister? If anything, it shows how much Sansa has grown on Game of Thrones. This season has been all about learning from past mistakes. Hopefully that means that the Stark siblings will trust each other, not those that seek to manipulate them.