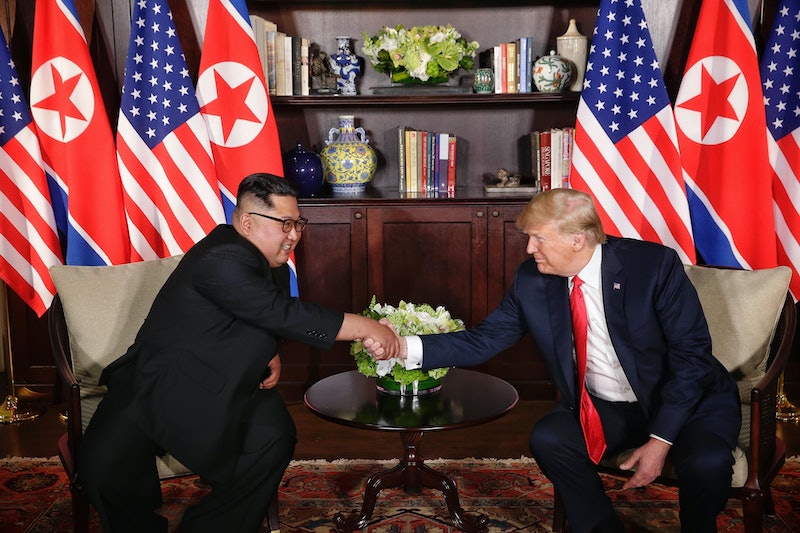 The summit between the United States and North Korea commenced on the morning of June 12, with the leaders of the countries coming together for the first time in history. Now, as the summit has progressed, you may be wondering what President Trump and Kim Jong Un signed in Singapore. According to President Trump, the historic document is both "very important" and "pretty comprehensive."

Following a morning of meetings, the two men came together to sign the document, collectively sitting at a desk flanked by North Korean and American flags. Both leaders briefly spoke at the signing. As previously noted, Trump commented, "We're signing a very important document, a pretty comprehensive document." He also told reporters in the room that he would be discussing the contents of the document "at great length" at press conference scheduled for later in the afternoon (local time). For his part, Kim said (via a translator), "We had historic meeting and decided to leave the past behind and we are about to sign the historic document."

Photos of the document indicate that the leaders discussed security on the Korean Peninsula as well as Korean denuclearization. As Conor Finnegan of ABC News reported on Twitter, zooming in on part of the text of the document revealed the following statement,

President Trump committed to provide security guarantees to the DPRK, and Chairman Kim Jong Un reaffirmed his firm and unwavering commitment to complete denuclearization of the Korean Peninsula.

As CNN reported, Trump also answered a few questions from reporters during the signing. When asked if Kim had agreed to denuclearize his country, Trump replied, "We're starting that process very quickly, very, very quickly. Absolutely."

As The Guardian reported, after the two men signed the document, Trump briefly reflected on the summit and shared his assessment of Kim. "We had a terrific day and we learned a lot about each other and our countries," Trump said. The American president also added, "I learned he’s [Kim]'s a very talented man and I also learned he loves his country very much."

Toward of the end of the signing session, Trump noted that he thinks that the future relationship between North Korea and the United States will look different than it has in the past. As Trump stated (as reported by CNBC):

As CNN noted, the American president also indicated that he would be willing to invite Kim to the White House.

The signing of the document came after a whirlwind morning of meetings. The summit kicked off at around 9 a.m. local time at the Capella Hotel on the island of Sentosa. It commenced with Trump and Kim sharing a historic handshake in front of a backdrop of North Korean and American flags.

Following their initial greeting, Trump and Kim proceeded to meet one-on-one, along with their interpreters. After this meeting, the two leaders headed to an extended bilateral discussion while accompanied by some of their advisers. Trump's delegation, who sat alongside him, included Chief of Staff John Kelly, Secretary of State Mike Pompeo, and National Security Adviser John Bolton. Kim's delegation included Ri Yong Ho, North Korea's foreign minister, and Kim Yong Chol and Ri Su Yong, two vice chairman of the central committee of the Workers' Party of Korea. Both leaders were also accompanied by translators.

The two men then headed to a working lunch. The historic signing of the document followed the lunch. According to CNN, shortly after the signing, both leaders departed the hotel. For his part, Trump will address reporters and reveal in detail the contents of the document that two leaders signed during a press conference scheduled for 2:30 p.m. local time. As The Guardian noted, the president is expected to address reporters alone.

Watching Trump and Kim sign a joint document certainly constituted a historic event. Now, the world will be watching closely as Trump reveals the exact nature of the agreement between the two countries.