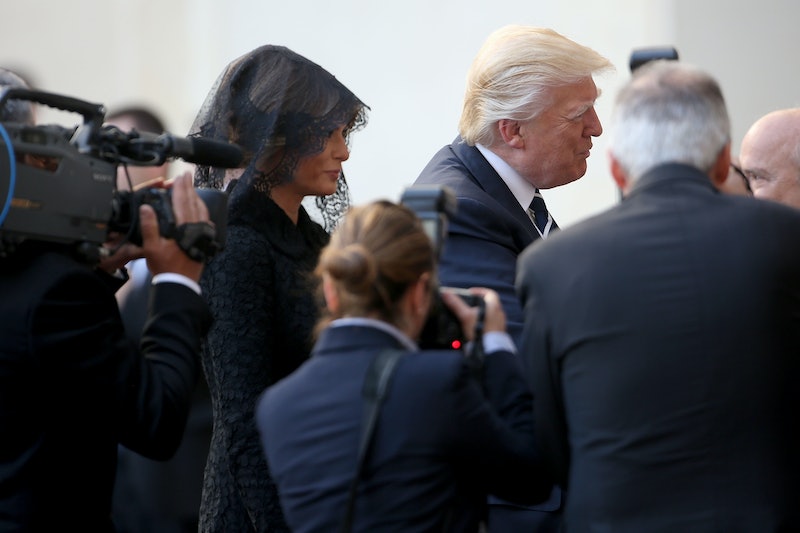 On Wednesday morning, President Donald Trump continued his first international trip with a visit to the Vatican and a private meeting with Pope Francis. But while the meeting was private, it was hardly a solo delegation. He was accompanied by his wife, Melania, his daughter Ivanka, her husband, Jared Kushner, and other government officials. So, what did Trump and the Pope talk about? The meeting was closed to reporters, but the Pope's short conversation with Melania were captured.

According to The New York Times, Trump and his entourage arrived in an armored limousine at the Vatican at about 8:20 a.m. local time. The Pope was already there, having arrived earlier in a blue Ford Focus. Quite a different image and way of moving through the world — and that was before they even sat down to speak. That gives you just a small idea of the different points of view the two have.

But it's not just Trump's championing of the rich and the Pope's championing of the poor that could cause conflict between the two. Some of the biggest differences of opinion are about key issues that the Republicans and Trump have affected since coming to power like climate change and immigration.

The two topics surely would have come up during the 29-minute meeting, even if it is impossible to know. When Trump was on the campaign trail speaking about building a wall, the Pope was one of his fiercest critics of those politics. "A person who thinks only about building walls, wherever they may be, and not building bridges, is not Christian," the Pope said before the election.

In addition to likely speaking about climate change, the Pope gave Trump a copy of his writings, including a 2015 document “laudato si” that goes over the Pope's views on the environment. He makes the argument that it will adversely affect the poor. Trump has voiced doubt that climate change is caused by man, and is considering pulling out of the Paris climate pact.

After leaving the meeting, the Pope and Trump came out for pictures, and this is when part of the conversation was captured. You can hear the Pope ask Melania, through the translator (who speaks to the first lady in Italian), if she feeds her husband "potica." Melania appears to have misheard, and responded, "pizza?" After, the Pope blesses her rosary, and the group poses for photos.

The other part of the recorded conversation that has been widely reported, including by the Financial Times are the parting words "buena suerte," in Spanish, meaning "good luck." Trump also told the Pope that he would remember the words the religious leader shared.

Let's hope he does.

Correction: An earlier version of this article stated that the pope asked Melania Trump if she fed her husband pizza. This is incorrect. The pope asked her about potica, a Slovenian cake with nuts.