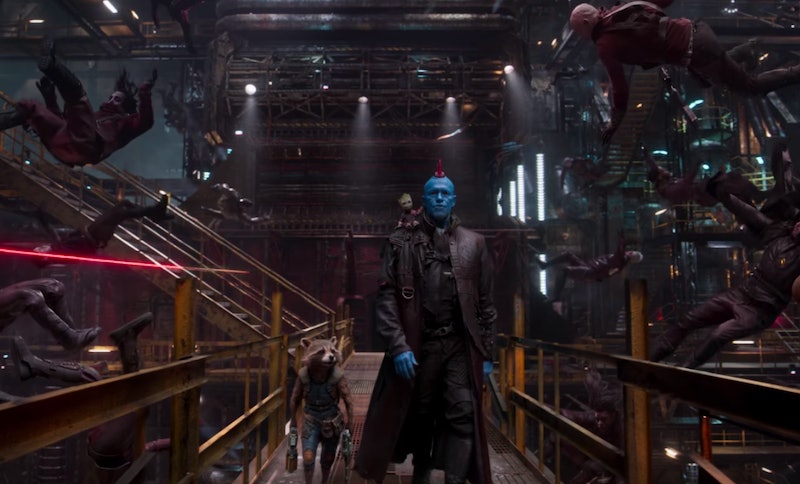 The last time we saw Yondu Udonta on the big screen, everyone's favorite blue space pirate was laughing after being outsmarted by Peter Quill (aka Star-Lord) in Guardians of the Galaxy. Though he spent the entire first film chasing Star-Lord through space, Yondu joins up with the Guardians in the sequel, which begs the question, what did Yondu do before Guardians of the Galaxy Vol. 2 that inspired his to change his ways?

In the two months that have passed since GotG, Yondu and his Ravager Clan have continued to travel the galaxy, though they are far from the merry band of thieves they were when we met them. In fact, Yondu's team of Ravagers have gotten restless. Bitter over how easily Yondu let Star-Lord get away after he refused to give them the orb with the Infinity Stone (an act of treason that should have resulted in death), the Ravagers are ready to go rebel against Yondu. That's where we meet him in GotG 2, but to explain why Yondu really decides to abandon the Ravagers and join the Guardians, we have to understand what Yondu did before Guardians of the Galaxy, and even before he met Peter Quill. Spoilers ahead.

As revealed by a particularly fun cameo in Guardians of the Galaxy Vol. 2, before literally taking Peter Quill off the face of the Earth, Yondu spent decades trafficking children for Ego, Star-Lord's biological father. Child trafficking is against the Ravager code, and it was this that got him exiled from the rest of the Ravagers, as revealed by Stakar Ogord (Sylvester Stallone) in GotG 2, according to the Marvel Cinematic Universe Wiki. Yep, you read that right. Before Yondu was a space pirate zipping around the galaxy with Star-Lord, he was actually a professional abductor of children. It was only after finding Peter that Yondu turned his life around. His crew stopped kidnapping children for Ego, and he raised Star-Lord as one of them, as seen in GotG.

Of course, then his relationship with Star-Lord and the soft spot he developed for the human caused tensions with his own team, but, that's the price you pay for adopting a human son. In Guardians of the Galaxy Vol. 2, Yondu is forced to face his past of kidnapping children for Ego when the celestial god finally catches up with Star-Lord. The blue space pirate might have done some bad things in the past, but now his entire focus is on saving Star-Lord. We can't fault him for that, can we Marvel fans?