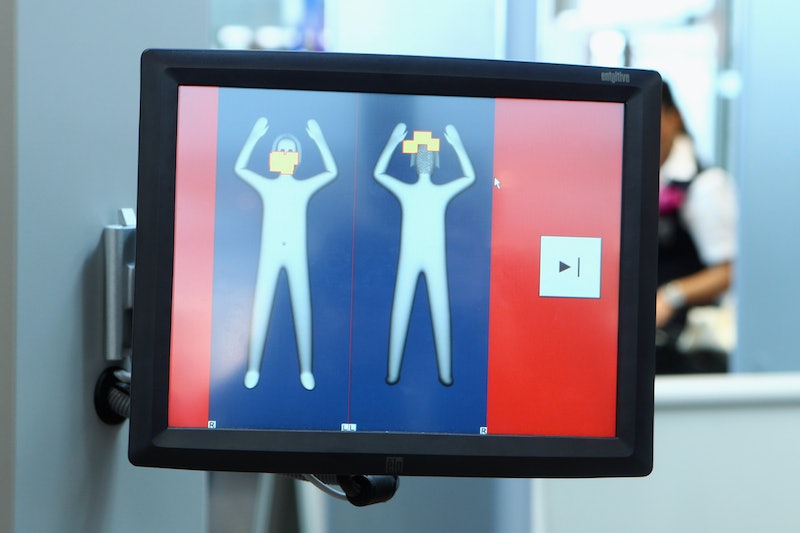 A regular part of traveling today is going through the airport body scanner before boarding your flight. And even if you've followed protocol and taken everything out of your pockets, you can still get flagged. Perhaps this has led you to wonder: What do body scanners in airports detect, anyways? This is actually a pretty common question posed online, and travelers have cited being flagged for everything from sweaty armpits to small skin lesions. Most people I know have set off the scanner at one time or another, which usually results in a little extra pat down on the area of the body the scanner deemed suspicious. Nine times out of 10, people are quickly sent on their way.

However, a case study published in the journal JAMA Dermatology found that new airport body scanners that use radio frequencies may flag things on travelers' bodies that aren't actually security threats. Airport body scanners are designed to detect masses either on your body or hidden inside of your clothes — however, in rare cases protrusions on your body could set off the scanner. "An airport traveler had a 1.5-cm epidermal inclusion cyst detected by an airport scanning device prompting a personally invasive security search for hidden explosives," the study reported. "Subsequently, the traveler obtained a medically explanatory letter to present to airport security agents on future journeys."

For people with medical conditions, sexual assault survivors and those with anxiety, submitting to further body searching can be extremely upsetting to say the least. If you are an assault survivor, you can request a private screening and even request a specialist in advance, according to the Rape, Abuse & Incest National Network.

In general, body scanners are designed to detect non-metallic items on people's bodies that metal detectors may miss, USA TODAY reported. The scanners can't see inside of your body, and you don't appear naked in the scan. If you do set off the scanner, and you don't have anything on your body, you're most likely going to be just fine. "The full-body scanners used in all airports since May 2013 are called 'millimeter wave' machines, which bounce electromagnetic waves off the traveler to provide an animated image where a suspicious item might be located," USA TODAY noted.

Things like having you socks bunched or having hair extensions or bobby pins in your hair can get you flagged. Once TSA determines what set off the scanner, you're usually good to go. I've tripped the scanner with my hair half a dozen times, but once they feel my head they move me along. According to the website Scan-X Security, underwire bras might also get you flagged when going through the body scanner or metal detector. If you want to avoid dealing with the extra pat down, don't wear anything in your hair and opt for a non-underwire bra.

Overall, your best bet for getting through the body scanner quickly is to dress simply, and remove everything from your pockets, including little scraps of paper. If you have body piercings, they might trip the scanner, but travelers on forums with body piercings have also reported going through airport security with no problems. I used to have several body piercings, and they never set off any metal detectors or scanners.

If you do get flagged, once it's identified that you're wearing body jewelry you should be sent on your way. If the body scanner just plain gives you the creeps, you can opt out entirely and request a pat down from an TSA officer who is the same gender as you, though this generally takes longer so make sure to allow for extra time at the airport. Let's face it — pretty much everything about the airport is a huge pain these days, but knowing what to expect up front can help make the experience a little less awful.