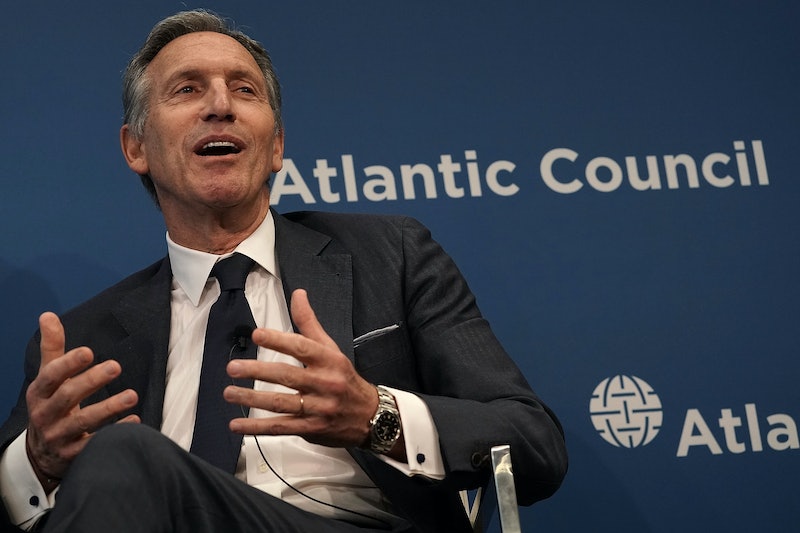 Over the past few weeks, Americans have gotten a first look at who may be pursuing a presidential bid in 2020 after multiple politicians launched exploratory committees. Now, Starbucks' former CEO is thinking about joining the contenders, though he's said he would consider running as an independent candidate. This announcement may make you wonder what independents want politically. Howard Schultz's declaration simply means that he wouldn't want to be affiliated with a political party and, thus, would have a bit more freedom to build his own issue platform.

Schultz mused about the prospect of running as an independent on Twitter on Sunday. The former Starbucks CEO wrote, "I love our country, and I am seriously considering running for president as a centrist independent." As Michael McDonald and Seth McKee described in a 2010 Brookings Institution piece, independent candidates are those who don't consider themselves a member of a political party and thereby not beholden to party stances on issues.

The authors also added that it's not that uncommon for moderate, or centrist, independent candidates to win congressional races, as they are often perceived as towing the line between the ideological "extremes" of the Democratic and Republican parties. Though, as the New York Times pointed out, it's rare for independents to become presidential contenders.

Notably, independent politicians don't all support the same issues, because their status as independents typically means they can take a more individualized approach when it comes to voting on legislation. In reflecting on why he has chosen to identify as an independent, Schultz told the New York Times that he is frustrated with the actions of both the Democratic and Republican parties. As the former CEO described to the paper:

We have a broken political system with both parties basically in business to preserve their own ideology without a recognition and responsibility to represent the interests of the American people ... Republicans and Democrats alike — who no longer see themselves as part of the far extreme of the far right and the far left — are looking for a home ... The word ‘independent,’ for me, is simply a designation on the ballot.

Schultz also told CBS News' 60 Minutes on Sunday that he considered himself a "lifelong Democrat," but now believes that party polarization means that Americans need more options to ensure that their views are represented. " ... The American people are exhausted. Their trust has been broken. And they are looking for a better choice," Schultz said on 60 Minutes.

USA Today reported that Schultz's potential presidential ambitions have made some Democrats uneasy, as they worry that an independent candidate could split the left-leaning vote and thereby ensure that the Republican candidate (presumably Donald Trump) would win. Indeed, Julián Castro, the former Secretary of Housing and Urban Development and a contender for the 2020 Democratic presidential nomination, echoed this concern on CNN on Sunday. Castro told the network that, if Schultz runs as an independent, " ... it would provide Donald Trump with his best hope of getting re-elected."

It remains to be seen whether Schultz will move forward with his presidential pursuit and officially declare his candidacy for the 2020 race. You can be sure that many Americans — especially politicians — are closely watching as the former Starbucks CEO ponders his next steps.