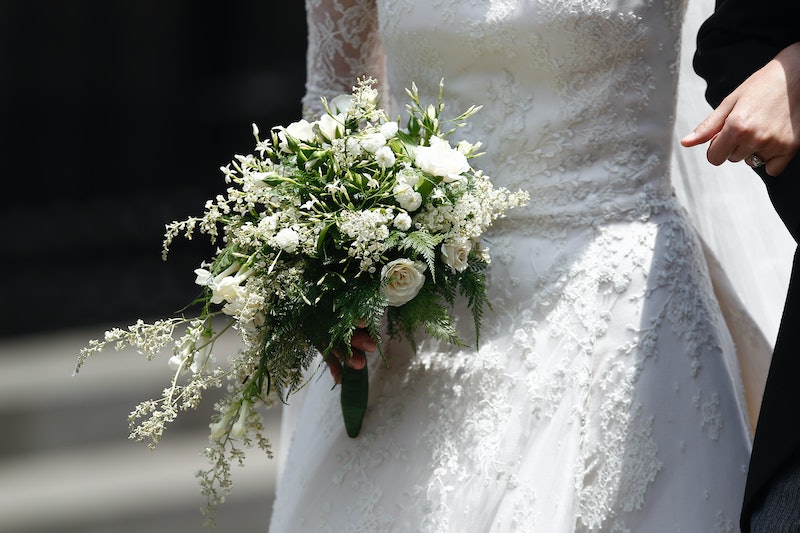 With the royal wedding less than a month away, everyone is hungry for details about the ceremony. The latest reveal may have you wondering: What do the royal wedding flowers mean? Bride to be Meghan Markle will reportedly have all of her favorites on hand, and her selections symbolize love, family, and prosperity. Town & Country announced that the royal couple has hired luxury wedding florist Philippa Craddock to oversee the arrangements, which will reportedly include white garden roses, foxgloves, and peonies. "Working with them has been an absolute pleasure," Craddock told Town & Country. "The process has been highly collaborative, free-flowing, creative, and fun." What's more, the couple will donate the floral arrangements to charitable organizations after the wedding.

So, just what do Markle's choices mean? White roses, also commonly called bridal roses, are a popular wedding choice, according to the blog Garden Roses Direct. "White roses represent innocence, purity, and youthfulness. In psychology, white represents a new beginning or a blank canvas where you can paint a new masterpiece. A fresh start. This is the reason why white has been a traditional color of weddings, since many couples see their wedding as the dawn of a shared future." The website Flower Info also notes that foxglove flowers were often thought to promote fertility in Greek mythology.

What's more, foxgloves can be a positive omen. "As a gift, these flowers are usually given to represent the wish for the recipient to heal from any ailment or trauma, and to regain their happy, youthful vitality." Peonies, reportedly Markle's favorite flower, are also an ideal choice for her wedding day bouquet. Peonies are mainly known for representing ideas and values like honor, especially for people who are bringing honor to their entire family through success, wealth and riches, romantic love, and beauty in all forms, the website Flower Meaning explained. Pink peonies are the most popular choice for weddings because the color symbolizes romantic love. However, royal wedding bouquets are traditionally white. so don't expect any millennial-pink peonies in Markle's bouquet.

While Markle does get to choose her flowers, there are some royal traditions that will likely be incorporated into her bridal bouquet. "Every royal wedding bouquet contains at least one sprig of myrtle, a tradition which dates back to 1840 when Queen Victoria married Prince Albert," Town & Country noted. "Myrtle symbolizes hope and love, making it a fitting addition to any bride's bouquet, royal or not." According to the blog Royal Central, myrtle's "associations with marriage has its origins in both ancient Greek mythology, as well as in Roman ritual, the myrtle being 'dear' to Venus, as it had once been considered 'sacred' to the goddess Aphrodite."

Myrtle has a long and storied history in the royal family, and often lives on long after the nuptials in the form of a "tradition of wedding bouquets being used to plant bushes, or sprigs being taken from existing ones to be used for brides within the royal family," Royal Central explained. "A piece of myrtle from Osborne was used for the wedding bouquet of Queen Victoria’s eldest daughter, the Princess Royal, who married Crown Prince Frederick William of Prussia in 1858."

What's more, Town & Country noted that floral arrangements at St. George's Chapel and St. George's Hall will include branches of beech, birch, and hornbeam. According to the website the Goddess Tree, carrying a small piece of beech can bring luck and success. The website also revealed that in Celtic tradition, birch brings together dreams and prepares people for the new patterns of living, like a marriage, while author, feng shui consultant, and intuitive counselor Tess Whitehurst noted on her website that hornbeam symbolizes enthusiasm and protection.

The symbolism of wedding bouquets dates back centuries, according to the website Ever After Guide. "In Roman times, they incorporated a mixture of aromatic herbs at each wedding ceremony because they associated them with fertility. Additionally, the bride and groom would wear a garland around their necks, which stood for hope. At that time, the strong-smelling herbs such as dill and garlic were supposed to ward off evil spirits and protect the bride and groom from bad happenings."

However, modern-day-bridal bouquets became a staple when Queen Victoria carried one made of fresh flowers and herbs, including a sprig of myrtle. "In Victorian times, the choice of flowers was also determined by their meaning, as lovers aimed at transmitting messages to one another through flowers." If the meanings associated with Markle's flowers are any indication, the tradition of communicating with partners through flowers seems to be alive and well. And, Markle's selection of beautiful blooms might means she is sending Prince Harry messages of love, abundance, protection, success, family values, and the hope of a prosperous new beginning, which is so #RelationshipGoals.