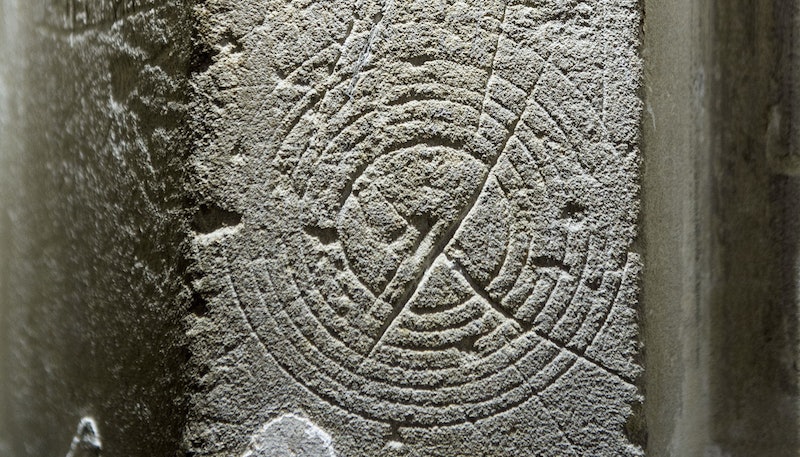 The UK's obsession with witchcraft dates back centuries, with ancient markings all over the country revealing exactly when and why people were so intrigued. It has just been reported that the UK's largest collection of anti-witch marks have been found in caves in England, which show just how desperately people tried to protect themselves from unfriendly spirits. But what do witches' marks look like, and where can you find them?

Firstly, it's important not to confuse witches' marks found on surfaces with a witch mark found on an actual person. According to The Encyclopaedia of Witches and Witchcraft, the latter was thought to be a mark placed on a person's body after pledging service to the Devil. It tended to be blue or red, looked like the individual's flesh had been clawed, and, in centuries gone by, was used as proof that a person was a witch.

Witches' marks, on the other hand, are commonly found in old churches and houses near entry points including windows, doorways, and fireplaces, reports the Huffington Post. These don't signify that the person lived there was a witch. Instead, they are protective markings designed to ward off any sign of evil, and are thought to have been made between the 16th and early 19th century.

Hundreds of witches' marks — also known as apotropaic marks (from the Greek word "apotrepein" which means "to turn away") — have recently been discovered at Creswell Crags. The limestone gorge, which is located on the border between Derbyshire and Nottinghamshire, was previously thought to be full of regular graffiti, but experts have now confirmed the presence of witches' marks.

A number of markings are easy to identify if you know what you're looking for. As the Guardian reports, there's the double V (a mark believed to reference Mary, Virgin of Virgins), the PM, which stands for Pace Maria, and crossed I's resembling Jesus on the cross.

Although many of these marks relate to Christianity, that doesn't mean that the people who made them were necessarily religious, says expert Alison Fearn. "It just becomes a protective symbol. It was a mark you always made to protect yourself," she told the Guardian, comparing it to when people use the phrase "oh god" nowadays.

Witches' marks have been found in several notable locations in the UK, according to Historic England, including the Tower of London and the birthplace of William Shakespeare. But the new discovery at Creswell Crags is the largest number to ever be found in one place. It is thought the original markings were added to over time, potentially as a result of disease outbreaks or crop failures.

“Even 200 years ago, the English countryside was a very different place; death and disease were everyday companions and evil forces could readily be imagined in the dark," Duncan Wilson, chief executive of Historic England, told the Huffington Post. “We can only speculate on what it was the people of Creswell feared might emerge from the underworld into these caves.”

In 2016, Historic England issued a call to the public to help locate more witches' marks across the UK. According to the organisation, these markings have "never been fully recorded" despite being found in many historic places. So if you're out and about and spot a strange carving on the wall, send a photo to the experts. You never know how important your discovery could well be.