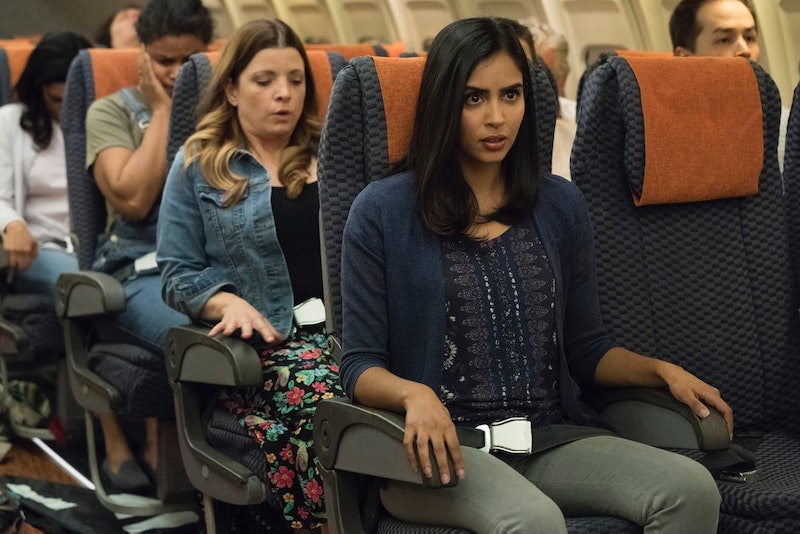 Spoilers ahead for Manifest Season 1, Episode 1. NBC's new drama, Manifest, isn't drawing comparisons to Lost just because it deals with a mysterious plane incident. It also focuses on a specific set of numbers that viewers know will be integral to the story. And since piecing together the significance of Lost's 4, 8, 15, 16, 23, 42 took quite some time, let's try to get this one out of the way early: What does 828 mean on Manifest?

The easiest answer is that it's the flight number of the plane at the heart of the story. While the 191 people onboard experience the passing of only a few hours, when they land, they learn it's actually been five years. No one can explain what happened, but the number 828 gives us a pretty huge clue. In the premiere episode, the number can be seen in a Bible verse Michaela's late mother stitched onto a pillow. It reads, "All things work together for good," and is a part of the bigger Romans verse 8:28.

Elsewhere in the episode, Michaela and her fellow passengers begin hearing a voice instructing them to do things like rescue kidnapped girls and request a bus drive slower, so that it doesn't hit a child that's run out into the street. From that, it seems like 828's passengers have all been called to work toward the greater good — whether or not they're willing.

Whatever the voice's reason for bringing these people together, it's definitely connected to numbers 828. Michaela first hears it saying "all things" when she sees her mother's pillow, and later, its message to "set them free" leads her to an 828 address, where she's able to help rescue the kidnapped girls.

The numbers two and eight also appear on the bus where Michaela heard "slower" to save the child. As they don't appear in an 828 order, it's unclear how strictly the voice adheres to that specific numerical pattern, but it's clear "eight" and "two" have some kind of significance. (In the photo below, you can see eight and two together at the front of the bus, making up "0823.")

It's possible that the Manifest writers chose to call the plane Flight 828 simply to match up with the Bible verse and its coinciding message, but the more mystical meanings of 828 are pretty spot on, too. According to Australian psychic/spiritual worker Joanne Walmsley's blog, the spiritual energies of eight and two go pretty hand-in-hand with what verse 8:28 is trying to say. She writes that eight represents things like self-reliance, serving humanity, and good judgement, while two signifies service to others, compassion, and finding "your life purpose and soul mission." All of which sounds an awful lot like what these characters are experiencing post-flight.

So, whenever you see those numbers pop up on Manifest, brace yourself — it usually means the voice isn't far behind, and that bad things are about to be countered by "all things work[ing] together for good."

More like this
The Kenan & Kel Reunion On SNL Took A Dramatic Turn, Thanks To Keke Palmer
By Brad Witter
Keke Palmer Just Announced She's “Going To Be A Mom” On SNL
By Brad Witter
This 'White Lotus' Symbol Could Hint At A Major Character's Death
By Grace Wehniainen
The 'Firefly Lane' Book Ending Teases Way More Tears To Come In 2023
By K.W. Colyard
Get Even More From Bustle — Sign Up For The Newsletter