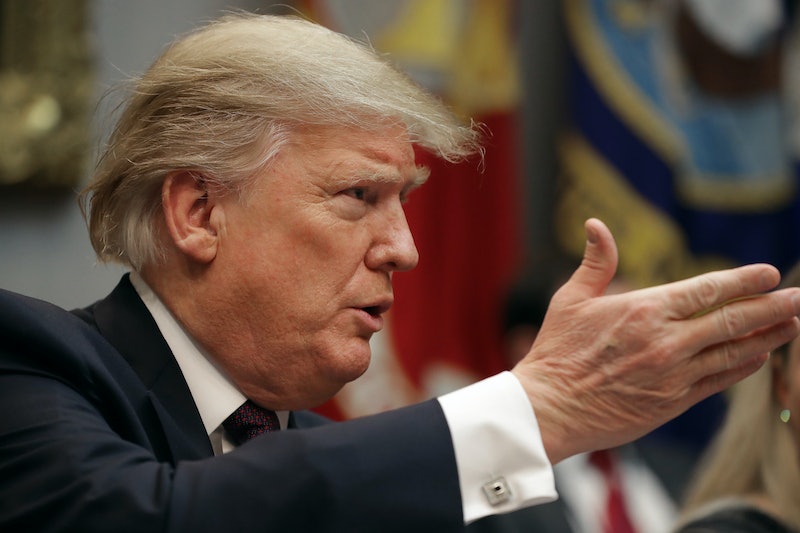 For weeks, Democrats have been engaged in a conflict with President Donald Trump over the partial government shutdown. Democrats have proposed multiple bills to reopen the government, but Trump has indicated that he will not sign off on any legislation that does not include funding for his proposed border wall. On Thursday, however, Trump told reporters that he would be open to reopening the government for three weeks in exchange for a "prorated down payment" on his border wall, leaving several senators confused.

"One of the ideas suggested is that they open it, they pay a sort of a prorated down payment for the wall, which I think that people agree you need," Trump said at a Thursday press conference. Bustle has reached out to the White House for clarification.

Trump then went on to describe the Senate's 50-47 vote on a White House-backed measure as a win, though he noted that Republicans needed 60 votes to actually pass the legislation. This measure — one of two that the Senate voted down on Thursday — would have reopened the government in exchange for the full $5.7 billion that Trump has demanded for his border wall, per The Hill.

According to The Washington Post's Mike DeBonis, House Speaker Nancy Pelosi told reporters on Thursday that the idea of a "large down payment" is a non-starter, and would "not be a reasonable agreement."

"I don't know if he knows what he's talking about," Pelosi said, per DeBonis.

Alaska Sen. Lisa Murkowski, meanwhile, told CNN's Manu Raju that "I don't know what that means," referring to Trump's call for a down payment on his wall.

Earlier on Thursday, Senate Majority Leader Mitch McConnell and Senate Minority Leader Chuck Schumer started to discuss a short-term funding measure to reopen the government after two competing bills failed to pass the Senate. Trump subsequently told reporters at the White House that if McConnell and Schumer "come to a reasonable agreement, I would support it, yes," per USA Today. However, Trump also said his support for any legislation would depend "on what the agreement is."

“I have other alternatives if I have to," Trump said, noting that he would not be content with any bills that don't include funding for the wall. "We have to have a wall in this situation.”

According to The Hill, it is unclear how much money Trump expects from a stopgap spending bill before he agrees to sign off on it. White House Press Secretary Sarah Huckabee Sanders also did not provide an exact amount of money, though she clarified that it had to be "large," per her official Twitter account.

Democrats and Republicans have gone back and forth over the government shutdown for weeks, to the point where it is now the longest shutdown in U.S. history.

Over the weekend, Trump proposed protections for Deferred Action for Childhood Arrivals recipients and Temporary Protected Status holders in exchange for his border wall — but Democrats were not convinced. Democrats have accused the president of taking the government "hostage," per The New York Times, and have indicated that they are not interested in talking about border security or immigration until after the shutdown ends.