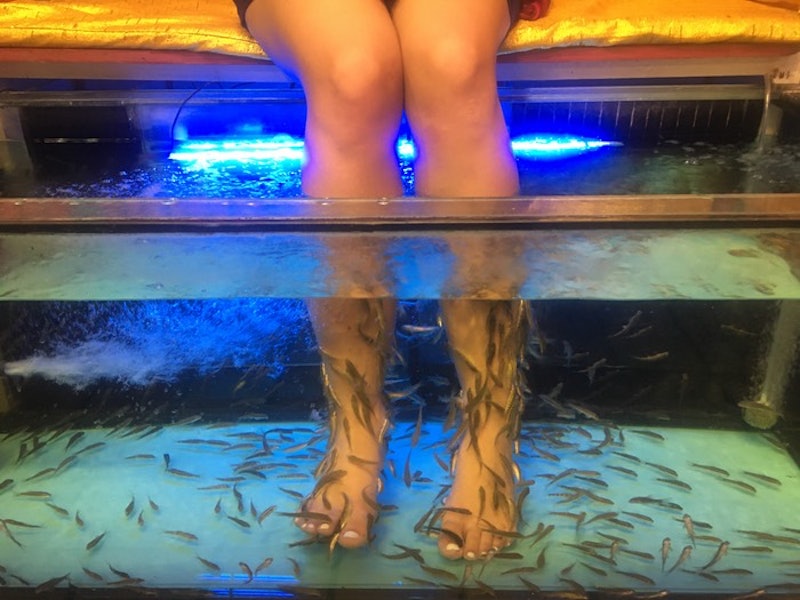 As far as relaxing spa treatments go, fish pedicures have to be dead last in the running. But, as they say, desperate times call for desperate measures. I’ve been wearing the same pair of patent leather flip flops every day for the last four months while traveling through Asia. They’ve walked in cities, on beaches, up mountains, and once, almost through Elephant poop. But while my trusty old flip flops are super cute and go with everything, they aren’t exactly great for my feet.

Around week three of my travels, I started getting nasty calluses, which I've affectionately started calling my "sandpaper feet," that have been impossible to fix. I’ve tried everything from peels to pumice stones to pedicures, but no matter what I do, the cracked, dead skin on my heels and toes just won’t go away. So when I got to Thailand after three and a half months of abusing my feet (which at that point were genuinely unrecognizable) there was one thing left that I knew I had to try: A fish pedicure.

According to the Center for Disease Control, a "fish pedicure" (also known as a "fish spa") involves dipping your feet in a tub of water filled with small fish called "Doctor Fish." They eat the dead skin (AHHHHH!!!) and leave new, soft skin in its place. 10 states in the U.S. have banned these fish spas due to a variety of cleanliness issues, but the CDC is "not aware of any published reports on illnesses resulting from fish pedicures."

I'd seen a very pregnant Kim K trying it out on KUWTK, but swore up and down that it was NOT for me. I'm usually willing to try pretty much anything for the sake of beauty, but I found the thought of little fish mouths all over me genuinely disturbing. But I was desperate, and I was in Thailand (the home of the fish pedicure), and I owed it to my poor little feet to give it a try.

After weeks of unsuccessful TripAdvisor searches, most decent-looking place I found was called "Relaxing Beach Spa” in Phuket. The name was a complete joke because 1. It was not at all relaxing, 2. It was not on the beach and 3. Calling it a “spa” was a pretty major stretch. It was basically two tanks filled with fish and a random chair set up for massages in the corner. Before I was allowed to put my feet in with the fish monsters, the spa attendants insisted that they thoroughly wash them which at least made me feel like the place was clean.

When it came time for the big event, I stuck my feet in the tanks and the fish attacked. Naturally, I freaked the F out. I started screaming (and yeah, OK, crying a little bit) and and jumped up out of there immediately.

But when it comes to beauty treatments I’m kind of a masochist, and to be totally honest I was really curious about whether or not these magical fish were going to fix my feet issues. So I sucked it up (pun intended) and dipped them back in. I was supposed to sit there for 20 minutes, and lasted for 15 before I just couldn't take it anymore.

It’s hard to describe what it felt like, other than that it was exactly like what you would imagine having a hundred little fish mouths sucking your feet. I’m not totally sure if fish have teeth or not, but whatever they were doing was some combination of a kiss, a nibble and a bite... three things I’m usually into. But FYI? In this situation I was not into it. On a scale of hating it one to 10, I hated it a million. Days later I can still feel little phantom fishies on my feet, and wake up having nightmares that they're eating my toes off.

As for whether or not it was worth it? Absolutely not. My feet looked OK after the baby piranhas (or whatever they were) were done with them, but there wasn't nearly enough of a visible difference not to make me wish for that 15 minutes of my life back. In fairness to the hardworking fish, I think my feet were so dry and hardened that they couldn't properly latch onto the skin.

I think I'll stick with my pumice stone, however ineffective it may be, from now on.

Here are some of the products I'll add to my routine to soften up my feet, in addition to finally sucking it up and throwing my beloved patent leather flip flops.

For anyone who finds few things more satisfying in life than peeling away dead skin, and this BabyFoot foot mask is pretty much your dream come true. Leave the mask on for 60-90 minutes, and in three to seven days your feet will lose an entire layer of dead skin, leaving behind fresh, new skin in its place.

These trusty stones aren't just reserved for the pedicure chair — they can be highly effective at home, too. Keep one in your bathroom and give your feet a thorough scrub one to two times a week after letting them soak for a few minutes at the end of your shower.

If pumice stones freak you out, exfoliating foot scrubs like this one from Clarisonic are a great way to grind off dead skin. Make sure you use a moisturizer afterwards for super-smooth results.

More like this
13 Caffeine-Infused Eye Creams, Patches, & Serums For Puffy Under Eyes
By Olivia Rose Ferreiro
12 Absolutely Angelic Cherub Tattoo Designs
By Paris Giles
This Week’s New Makeup Releases & More Beauty Headlines
By Audrey Noble and Erin Stovall
The Body Shop’s New Range Has More Antioxidants Than Retinol
By Justine Knight
Get Even More From Bustle — Sign Up For The Newsletter