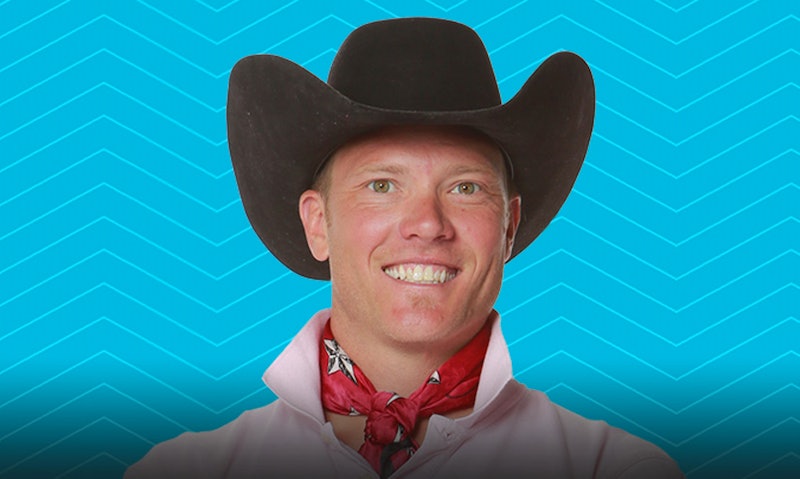 Every summer, we get to look forward to so many things: beach trips, umbrella drinks, and watching Big Brother. This season premieres on June 28 and promises an interesting cast which includes a cosplay artist, stay-at-home dad, and a dog walker. But nothing could've prepared us for the unique occupation of BB19's Jason Dent, who is a rodeo clown. So, what does a rodeo clown do? The job description is a lot like what we already know about clowns, who entertain us with a funny nose and makeup. A rodeo clown's job is to distract a bull while a fallen rider escapes the ring safely, according to Chron, and any delay might cause the bull to charge the rider. It seems the life as a rodeo clown is a super important job and Dent takes great pride in his work.

The Humeston, Iowa, native is better known as Whistle-Nut to the rodeo world and operates his own rodeo clown business along with his four-legged business partner Ole, according to their official website. Ole the bull and Whistle-Nut have been performing internationally for years. Rodeo clowns make an average of $50,000 a year, according to Career Search. Dent promotes Whiste-Nut and Ole on Instagram and Twitter, where they celebrated reaching 30,000 followers on their Facebook page this month, so they have quite the following in the rodeo world.

The occupation leaves quite a dent in a clown's pocket, according to an NBC Montana interview with Dent. Horse trailers cost around $80,000, not to mention the price you pay on boots, hats, and well ... incidentals. It seems this doesn't stop Dent and other riders from entertaining crowds around the country.

By now, you're probably dying to see a rodeo clown in action like I was. Check out the video below from Dent's official Facebook page.

Whoa, right? Pretty intense. As for me, I'm sticking to the safety net of being behind a computer screen. Just saying.