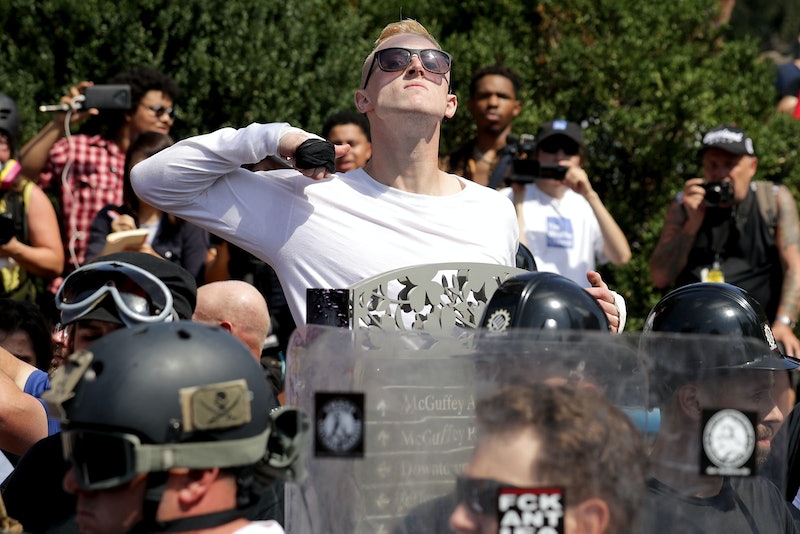 Thousands of white supremacists convened on Saturday at the Unite The Right rally in Charlottesville, Virginia, where scuffles between the marchers and anti-racist counter-protesters lead to fatal violence. Before the violence lead to the death of a 32-year-old woman, there was another disturbing scene, as the white nationalists in Charlottesville chanted "blood and soil" while marching down the road.

Huffington Post national reporter Christopher Mathias shared a video clip on Saturday of white supremacists chanting the phrase as they approached Emancipation Park in Charlottesville. In the clip, dozens of seemingly young white men can be seen marching forward while carrying shields and black flags with a white eagle. Eagles on each flag can be seen carrying fasces in their talons.

The marchers can be heard yelling "blood and soil" in unison. According to research conducted by the Southern Poverty Law Center on white supremacist groups and relevant symbols, the group of young white men in the clip apparently belong to Vanguard America, a white nationalist group.

"Blood and soil" is derived from its original German form, "Blut und Boden." The phrase gained prominence as an anti-Semitic chant after Nazi ideologist Richard Walther Darré used it during the ascension of Nazi Germany.

In the Blut und Boden ideology, there is a strong emphasis on maintaining a pure bloodline by marrying and procreating with those of the same ethnic identity. There is also, interestingly enough, a peculiar fascination with agrarian life and rural farmers. In other words, the ideology behind "blood and soil" apparently derives significance from pure ethnic descent and virtues found in German country life.

As mentioned before, the phrase gained popularity during the rise of Nazi Germany. One instance of the mainstreaming of the phrase took place in a speech carried out by Darré in 1930. In his public address, German farmers and peasants were highlighted as model citizens.

In such a state [like Germany], the German farmer is the cornerstone of the state's policy. ... That should not only mean that agricultural romanticism should be promoted, but rather that the laws of blood and soil must find their point of reference as a top priority.

Apparently, Saturday was not the first time dozens of white supremacists yelled the Nazi chant. According to CNN, far-right white supremacists at the Unite The Right rally began chanting "blood and soil" on Friday night, carrying it into the following day's chaotic rally.