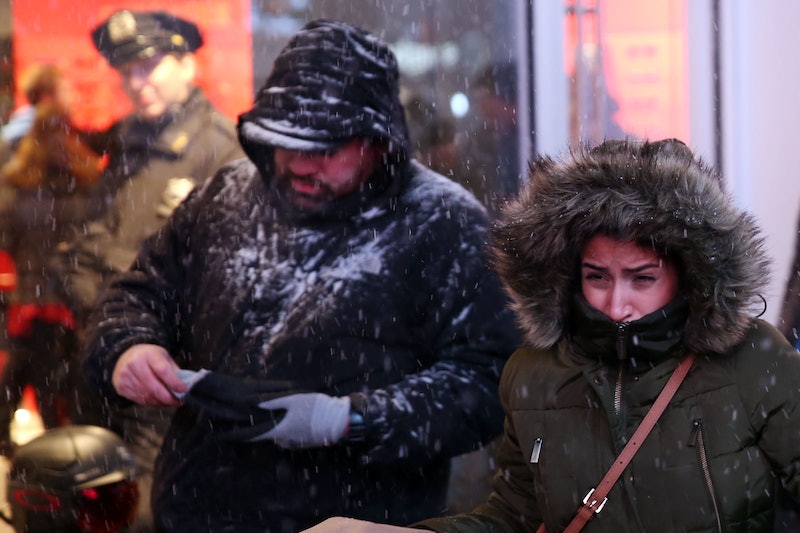 If you're on the East Coast, you might want to cancel your upcoming plans and hunker down with a cozy blanket. After days of brutally cold temperatures, a "bomb cyclone" is slated to hit the eastern United States later this week. Wondering what "bomb cyclone" means? One thing's for sure: It doesn't sound pleasant.

Forecasters predict Winter Storm Grayson will bring freezing rain, sleet, and snow to the Southeast coast on Wednesday, making its way up to the North by Thursday. The storm will reach from northern Florida up to Maine, with New England likely seeing blizzard conditions.

Here's where the "bomb cyclone" comes in — if the storm's pressure drops quickly enough, it will gain strength and become what's called a "bomb cyclone," and will essentially resemble a winter hurricane. It could have pressure as low as Hurricane Sandy, according to meteorologist Ryan Maue.

This type of weather event is called a "bomb cyclone" because a rapid drop in atmospheric pressure is known as bombogenesis. As the Weather Channel's website reads:

To be classified as a weather bomb, or having undergone bombogenesis or "bombing-out", the central pressure of a low pressure system must drop at least 24 millibars within 24 hours. ... Bombogenesis results when there is a large temperature gradient, usually between a cold continental air mass and warm sea-surface temperatures. However, it can also be the product of a cold polar air mass and much warmer air from the south, say, over the Plains states.

Friday and Saturday could boast record low temperatures in the Northeast. Winter storm watches were issued from parts of Virginia to eastern New England, mostly east of the larger cities. However, Boston is under a winter storm watch for significant snowfall and the Massachusetts Emergency Management Agency warned the public of potentially hazardous travel conditions. The National Weather Service tweeted that its biggest worry for the Northeast is strong winds that could hit Thursday:

The freezing temperatures will come from cold air drawn in by the storm as it moves up the coast. The Washington Post's Jason Samenow explains:

The storm's enormous circulation will help draw several lobes of the polar vortex, the zone of frigid air encircling the North Pole, over the Mid-Atlantic and Northeast by Friday and Saturday. Wicked cold air sourced from Siberia, the North Pole and Greenland will all converge on the region. Temperatures are forecast to be 20 to 40 degrees below normal, the coldest of the winter so far.

Parts of the nation that aren't used to extreme weather — such as Northern Florida, Georgia, and southern Mississippi and Louisiana — will likely get at least some snow flurries. The Weather Channel writes:

Eastern Georgia and southeast Virginia could get a few inches of snow, but the Southeast will mostly get icy conditions. The Weather Channel warns travel will likely be dangerous Wednesday and early Thursday, especially on bridges and overpasses.

Power outages are also likely in parts of northern Florida, southeastern Georgia, as well as the immediate New England coast. If you're in any of these areas, it's best to be prepared with plenty of non-perishable foods, a portable charger, and supplies to keep warm. Most importantly, be safe and avoid driving once icy conditions reach your area.

More like this
What To Know About Taking More Than 1 Piriteze Per Day
By Bustle UK
The 6 Best Balaclavas To Keep Your Face, Head & Neck Comfortably Warm
By Jenny White
How To See The Lunar Eclipse On May 15-16, 2022
By Kaitlyn Wylde
Conversations With Friends' Endometriosis Scenes Are As Brutal As It Gets
By Ivana Rihter
Get Even More From Bustle — Sign Up For The Newsletter