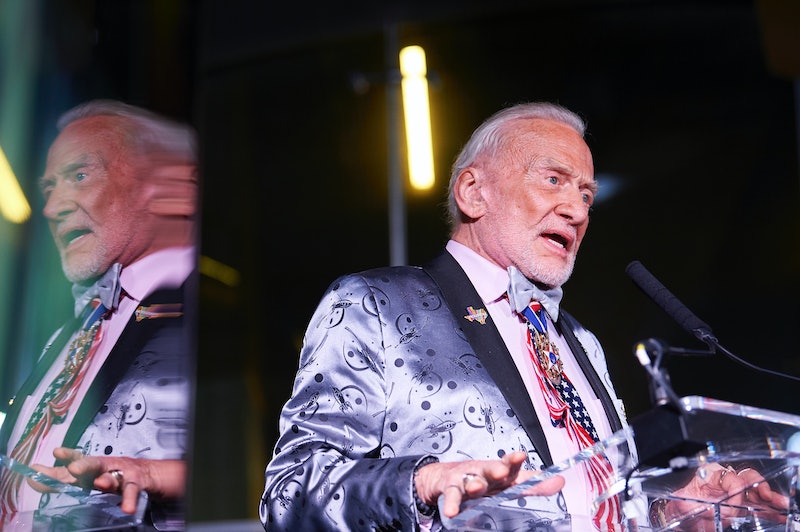 First Man is a different sort of space film, a biography focusing on the personal toll the Apollo 11 mission took on astronaut Neil Armstrong. The film covers the years leading up to and including the very first moon landing, which Armstrong made with fellow astronaut Buzz Aldrin. It's based on the sole personally-approved Armstrong biography and was affirmed by his sons, but given his role as bluntly-spoken foil to Armstrong's quiet stoic, what does Buzz Aldrin think of First Man?

For Space, James Hansen, who wrote the biography the film is based on, notes Armstrong was known for his quiet, unassuming personality, while a National Geographic interview paints Aldrin as a more flamboyant spokesperson for the space program, who nonetheless feels the sting of not being first.

"After years and years of being asked to speak to a group of people and then be introduced as the second man on the moon, it does get a little frustrating," he told the publication. "Is it really necessary to point out to the crowd that somebody else was first when we all went through the same training, we all landed at the same time and all contributed? But for the rest of my life I'll always be identified as the second man to walk on the moon."

First Man premiered at the Venice Film Festival to generally positive reviews and a storm of comments made by politians and talking heads criticizing the use — or lack thereof — of the U.S. flag. Slate details the entire history of the "controversy" including Aldrin's brief non-comment. When Gosling, who plays Armstrong, reflected on the astronaut's personality and made a small joke about how the movie doesn't specifically show the flag planting on the moon, Marco Rubio took the opportunity to trump up the issue with an Aug. 31, 2018 tweet calling the action "total lunacy". While Aldrin didn't directly comment, on Sept. 2, 2018 he posted two pictures of the flag on the moon with patriotic hashtags.

Beyond that, Aldrin hasn't offered any direct opinions on the film. It's interesting to note that in the credits both Armstrong sons get direct thanks, and a number of NASA engineers and space historians are thanked by the producers, but Aldrin's name is missing from the IMDB listings.

"You know, we tried to have everyone basically who we could to be as involved in the movie as possible to get the real info from them... he was on set when we were shooting the Cape Canaveral stuff and he was talking with Josh for a long time in prep ... One thing I think that’s great about that character is that here you’ve got a culture of people who make it a habit to not say what they’re feeling — to not say the kind of uncomfortable truths ... And Buzz is one of the rare people that actually speaks."

And yet despite being outspoken on modern NASA and promoting available signed photos of his missions, Buzz has remained surprisingly quiet about his thoughts on the finished film. Though it does sound as though he told Chazelle and Singer exactly what he thought about a lot of things. The closest he came to public comment was on Oct. 4, when he posted this photo and noted he had a "nice time" on set.

One reason Aldrin's remained mum could be that, as a stickler for realism, there's barely any complaint on that front with First Man. It sounds as though everyone involved took great pains to attain historical accuracy, and when they deviated, it was well-documented and with good reason. CollectSpace notes that astronaut Al Worden, who's actually orbited the moon and served as consultant on the film, surprised even himself recommending they deviate from history.

"I said, 'Put a light in the cockpit.' It is not supposed to be there, but put a light in the cockpit to make sure that the audience knows that the engine is going to start firing," Worden said. All changes were noted by Singer and Armstrong biographer Jim Hansen, compiled for future release as an accompanying book celebrating the film and the mission.

Corey Stoll, who plays Aldrin in the film, told Hollywood Reporter the first thing the second man said to him on set was in typical blunt Buzz style. "He said he could recommend somebody to look at my hair," the actor said. Seems like where Buzz isn't buzzing, no news is good news; the astronaut's lack of comment is likely the best positive endorsement he could give.