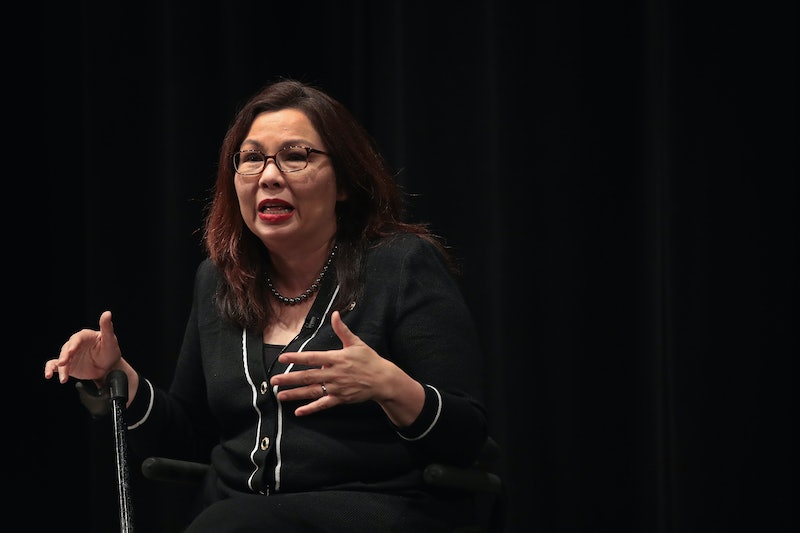 Sen. Tammy Duckworth (D-IL) has found the perfect way to castigate President Trump. Democrats refused to stand or clap for most of the president's State of the Union speech, which is an annual tactic that opposition parties use show their disapproval, but not one to which he took kindly. When Trump called the act "treasonous," Sen. Duckworth by calling Trump "Cadet Bone Spurs" on Twitter. But it isn't the first time she's used the nickname.

The label references Trump's reported avoidance of the Vietnam War draft. In 1968, at the age of 22, he received a diagnosis for bone spurs in his heels that he used to obtain a 1-Y medical deferment from military service. Bone spurs are projections that form on bones, particularly in the joints. Trump later received four additional deferments for being enrolled in school.

Some have questioned the validity of Trump's diagnosis. When speaking to C-SPAN in October, Sen. John McCain (R-AZ) suggested that some people bribed medical professionals to avoid the draft. "We drafted the lowest income level of America," he said, "and the highest income level found a doctor that would say they had a bone spur."

Duckworth has recently started using this history to disparage Trump by labeling him "Cadet Bone Spurs." She's taken to using the name often on Twitter, most recently in response to the president's comments that Democrats were "treasonous" for refusing to clap more frequently during the State of the Union.

"We don't live in a dictatorship or a monarchy," she wrote on Monday. "I swore an oath — in the military and in the Senate — to preserve, protect and defend the Constitution of the United States, not to mindlessly cater to the whims of Cadet Bone Spurs and clap when he demands I clap."

If anyone deserves to make this critique of Trump, it's Duckworth. She lost both of her legs while serving as a Black Hawk helicopter pilot in the Iraq War in 2004. She was the conflict's first U.S. female double amputee. The injury occurred when her vehicle was hit by a rocket-propelled grenade and nearly cost her one of her arms, too.

"I spent my entire adult life looking out for the well-being, the training, the equipping of the troops for whom I was responsible," Duckworth said on the floor of the Senate last month, in response to Trump's claim that the Democrats were harming members of the military by making them work without pay during weekend-long government shutdown. "I will not be lectured about what our military needs by a five-deferment draft dodger."

Taking a cue from Duckworth, Stephen Colbert parodied the idea of a "Cadet Bone Spurs" with a fake advertisement on The Late Show with Stephen Colbert on Tuesday. The cadet would "love to charge bravely into battle. It’s just that he has this thing with his heel, which causes occasional minor foot pain." The clip markets "Cadet Bone Spurs" as "Hasbro's Newest G.I. Joe Character" and shows him relaxing in a hammock with a drink while other soldiers charge into the fray.

Making fun of Trump's Vietnam War exemption seems to be in fashion this week. The New Yorker's famous satirist, Andy Borowitz, wrote a joke essay about the president's bid for a military parade. "Military Refuses to Participate in Trump’s Parade, Citing Bone Spurs," he wrote.

The phrase also seems to have caught on with "The Resistance," with many using it to criticize Trump on social media after Duckworth's viral tweet.

Trump is known for giving his opponents unflattering nicknames, from "Crooked Hillary" to "Sloppy Steve" to "Lyin' Ted" to "Little Rocket Man." It's only fitting that he receives a catchy one in return.