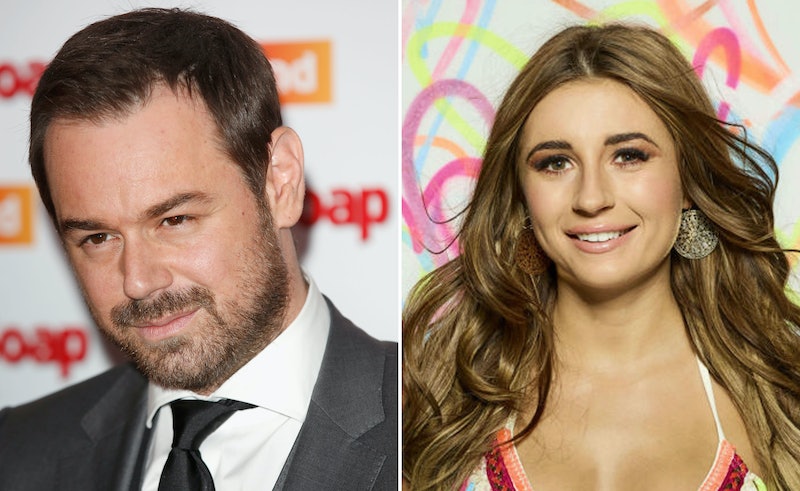 If you've been on Twitter in the past 24 hours, you'll probably have noticed certain memes popping up on your news feed. More specifically, memes trying to suss out what Danny Dyer's thinks of Dani's Love Island appearance on the show. I have a feeling this might be a theme that repeats itself through the series, and I am definitely not complaining.

When viewers weren't taking the mick out of Kendall Rae-Knight's attempt at blagging Harry Potter knowledge, social media was inundated with hilarious gifs, pictures, and live tweets about Dyer's potential thoughts while watching his 21-year-old daughter Dani in the villa.

The Eastenders star didn't have to do or say a thing before he became the subject of some of the most entertaining memes of the night. In fact, he was such a hot topic that his name started trending on Twitter half way through the episode. He hasn't actually tweeted himself yet or offered any comments on the series, and people are reading into that. Is he angry? Is he proud? Is he feeling defensive? Hopefully it's only a matter of time until we find out.

During the launch episode, when Dyer's firstborn ditched the opportunity to couple up with fellow islander Dr. Alex George (yes, he's a real doctor) in favour of Essex lad, Jack Fincham, who sells pens for a living, Twitter pretty much exploded. If you can't imagine the hilarity of the tweets that followed, check this lot out and thank me later...

Naturally, I reached out to Dyer's rep for comment but as you can expect, he's probably saving his reaction for his very own break-the-internet style moment. But still, people are desperate to know what's going on inside his head right now. So much so, some have even been talking about starting a petition to get the actor a special episode of Gogglebox so we can watch his reactions. Although, I should imagine ITV probably wouldn't want that kind of rating competition with Channel 4.

Honestly though, Dyer shouldn't worry too much. His daughter and her partner Jack are doing just fine so far. In fact, they've already become favourites among viewers thanks to their instant chemistry and similar sense of humour. And it didn't seem to bother Jack too much when he found out who Dani's dad is either, which is a good sign.

Explaining why she revealed her father's identity, Dani said: "I had to bring up my dad, I knew sooner or later that I would mention who my dad was. And it was actually a really nice reaction. Usually boys get a little bit… they start getting all 'gangster' and they start quoting films. He didn’t quote one quote and I thought, thank God for that."

After having made a good first impression on Dani, Jack then opened up about his feelings for her, admitting he thought she was "really pretty" and "really easy to get on with". He added: "I think she’s lovely. Where we’re quite similar. I just felt instant… not awkward, I can talk to her, have a good chat. Again, you just don’t know. I really like her. I fancy her."

I guess it's safe to say he likes her, then. But can he keep her away from this year's villa hunk, Adam Collard? The late arrival made his big entrance into the vila on Monday after the islanders had already coupled up, and he has the awkward task of breaking one of them up. Presenter Caroline Flack explained to the islanders: "In 24 hours, he will be coupling up with one of your girls, leaving one of you single and vulnerable. Because you know the rules. To stay on Love Island you have to be in a couple."

Pretty much straight away, Adam showed an interest in Dani, and viewers weren't happy.

Well, at least fans won't have to wait long to find out who Adam picks as Love Island is back again at 9pm on ITV2.

More like this
This Pre-'Love Island' Video Of Olivia & Zara Together Changes Everything
By Bustle UK
You’ve Got 'Love Island’s Farmer Will All Wrong
By Jack Orenstein
Molly-Mae & Tommy Fury Revealed Their Baby Girl's "Really Unusual" Name
By Sophie McEvoy and Sam Ramsden
'Love Island' Has Added Yet Another Bombshell To The Villa
By Bustle UK
Get The Very Best Of Bustle/UK
Sign up for Bustle UK's twice-weekly newsletter, featuring the latest must-watch TV, moving personal stories, and expert advice on the hottest viral buys.