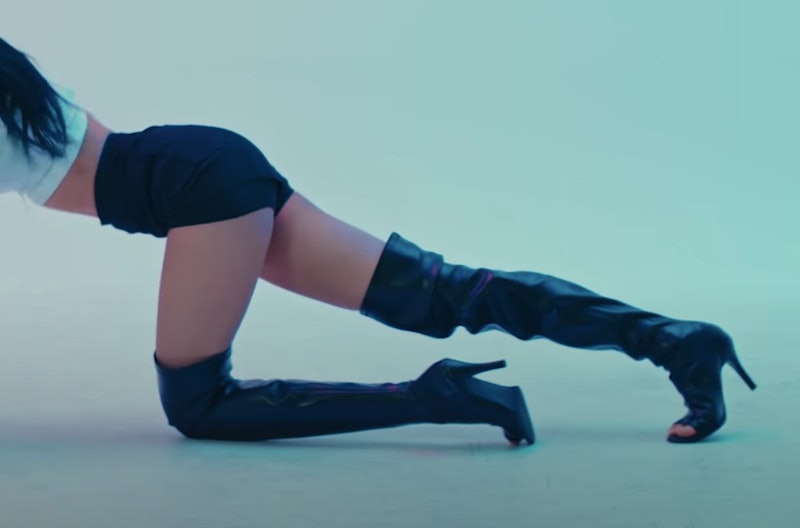 Since the world went into lockdown as a result of COVID-19, it’s more than likely that you’ve been spending a lot of your time in loungewear. But if you're missing getting all glammed up, there's a meme for that. But where did the "did it work" meme come from? Shrek, Timothée Chalamet, and Jeff Goldblum have all received the sexy Frankenstein-esque makeover and it’s definitely a *look*.

The "did it work" meme was born when K-pop sensation Lisa (from the band Blackpink) wore black boots and shorts in a solo performance on April 20. She was starring in the music video for QUIN and 6LACK’s “Mushroom Black” and to say fans loved her performance is an understatement.

Very quickly, Lisa’s performance was all over Twitter and people saw an opportunity for a mash-up. Hollywood’s Adam Driver, Jeff Goldblum, Taika Waititi, and Angelina Jolie were all paired with the image. Shrek, Luigi, and BoJack Horseman also got a makeover. Someone even tried out the thigh high boots with a picture of their cat.

So what's the deal with the "did it work?" caption? It appears that, just like with most things on the internet, there's no real explanation. Once one person initially started using it (because they were actually looking for confirmation on whether the idea had worked), it just became a *thing.* Now, it’s a little more tongue in cheek. While the original video of Lisa was brilliant, it’s not hard to see why some of the mash-ups have gone viral.

Check out our favourites below.

Dr. Ian Malcolm As You're Never Seen Him Before

Call Me By Lisa's Name

From Swamp To Sexy

The Fiercest Cat Of All

Lisa Simpson All Grown Up

You've Got To Start Them Young

More like this
This Girls Aloud x Sugababes Collab Still Hits All The Right Notes
By Sophie McEvoy
Here’s How You Can Watch The Grammys 2023 In The UK
By Emma Madden and Catharina Cheung
Harry Styles Just Split His Pants In Jennifer Aniston’s Face
By Sam Ramsden
Mimi Webb’s IRL Situationship Inspired “Red Flags”
By Catharina Cheung
Get The Very Best Of Bustle/UK
Sign up for Bustle UK's twice-weekly newsletter, featuring the latest must-watch TV, moving personal stories, and expert advice on the hottest viral buys.