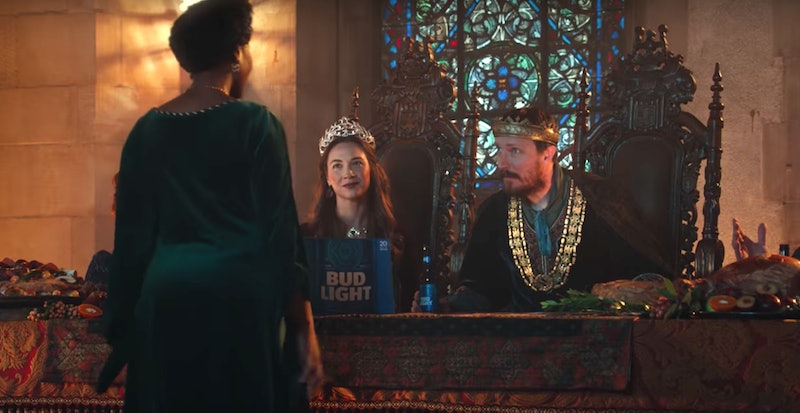 Question #1: Why does everyone in the comments section of HQ Trivia keep saying "Dilly, Dilly," and what on Earth does it mean? (Sorry, no cash prize for this one if you already know the answer.) For fans of HQ Trivia (or "HQties," as they're now more commonly known), it's not just a game, it's a way of life. And part of that life revolves around the comments section, which stays buzzing from before the game starts until after the last answer to the last question is finally revealed.

Most of the time, the comments just seem like a lot of noise: shout-outs, expletives, unending praise for Scott Rogowsky (the charismatic host/"Quiz Daddy"). Every now and again, if you're lucky, you can crowd-source a correct answer from the masses... assuming you're able to sort through the noise and keep up with the ever-scrolling feed. Lately, though, the feed has been unavoidably flooded with the phrase "Dilly, Dilly" — and here's why.

If you search Twitter for #dillydilly, the references are endless. Just finished eating a delicious lunch? #dillydilly. Wishing a friend 'Happy Birthday'? #dillydilly. Finally deep-cleaned your dust-covered apartment? #dillydilly. While the usage of #dillydilly spans far and wide, the most overwhelming number of tweets appear to use it in reference to football. (Are you confused yet?)

Upon further investigation, the origin of #dillydilly can be traced back to a Bud Light commercial. Yes, you read that right: The viral phrase that's taken over the HQ Trivia feed (and the rest of the internet) was created for a commercial "that tries to bring back the frivolous, funny marketing that propelled [Bud Light] in its heyday," according to E.J. Schultz at Ad Age. Remember those "I love you, man" Bud Light commercials from the mid-'90s? Or the "wassup" ones that followed a few years later? Well, #DillyDilly is that for 2017.

Bud Light enlisted the advertisers over at Wieden & Kennedy for the now-viral series of commercials, which were meant to evoke a Game of Thrones kind-of-vibe, and first aired shortly before the Game of Thrones season finale back in August. The premise of the commercial revolves around several loyal subjects presenting their king and queen with lavish gifts of Bud Light bottles, to which everyone raises a goblet and cheers, "Dilly, Dilly!" The last subject, however, presents them with a "spiced honey mead wine," and is immediately exiled to the "pit of misery." Bud Light recently unveiled a similarly-themed sequel commercial that picks up where the last one left off, and thus, the era of "Dilly, Dilly" now reigns supreme.

While the catchphrase enjoyed some success after the first commercial aired, people really started picking up on it after Pittsburgh Steelers quarterback, Ben Roethlisberger, shouted out "Dilly, Dilly" at the beginning of a play during a recent game against the Tennessee Titans, according to a November 22 write-up by Tim Nudd at Adweek. Turns out that Roethlisberger and his offensive line had all seen the commercial, thought it was funny, and started using it among each other. Since then, football fans (of all teams) have started using the phrase as a celebratory battle cry in tweets about the games, which is how it finally came to invade the comments section of HQ Trivia. Phew.

So, HQties, now you know. The next time you find yourself scrolling through the comments section (likely in a few short hours, barring the end of the world or something equally catastrophic), and you see someone shout out a triumphant "Dilly, Dilly," it's safe to assume that they've selected a correct answer, are celebrating a small victory, and will be moving onto the next round. (That, or, they've just cracked open a fresh Bud Light.)