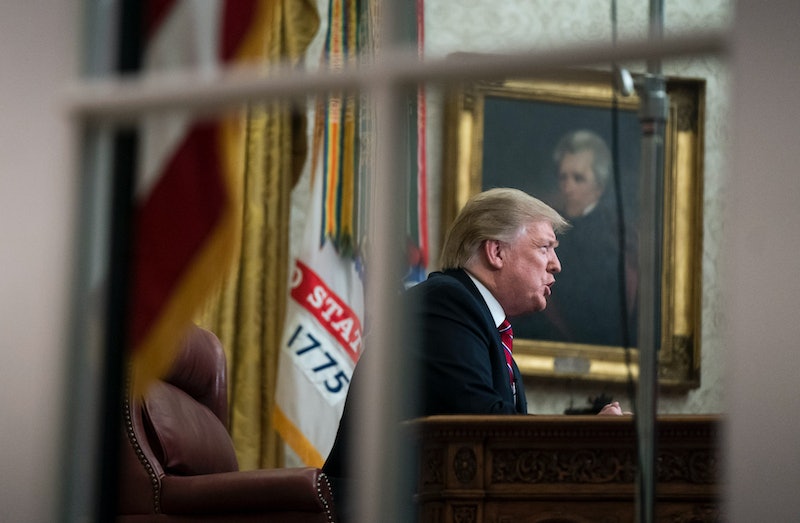 A new report from Axios revealed that President Trump reportedly spends significant portions of his days in "executive time." If you're wondering what exactly executive time means, Trump's frequently-scheduled activity reportedly reflects a more unstructured part of the day during which he can allocate time to his desired activities, Axios noted. Bustle reached out to the White House for comment on Axios' report regarding Trump's executive time, but has not yet received a response.

Axios revealed on Jan. 3 that it had obtained copies of Trump's daily schedule reflecting almost every day of the past three months. The copies were reportedly given to the outlet by a White House source. As Axios noted, according to these schedules, Trump reportedly spends much of the beginning of his day — from early morning until 11 a.m — in executive time. When examining scheduled executive time over the past three months, Axios indicated that Trump has reportedly spent around 60 percent of his time in executive time.

As The Guardian noted, the schedules further reveal that the president reportedly spent 77 hours in scheduled meetings compared to 300 hours in executive time over three months. However, as Axios pointed out, an executive time designation reportedly doesn't necessarily mean Trump isn't having a meeting. Instead, as Axios noted, any meetings Trump has during executive time are reportedly either spontaneous ones or they're those he doesn't want West Wing staff knowing about for fear of leaks.

White House Press Secretary Sarah Huckabee Sanders reflected on the nature of Trump's executive time in a statement she emailed to Axios. The press secretary implied that executive time helps foster a creative environment for the president, saying to Axios:

President Trump has a different leadership style than his predecessors and the results speak for themselves. While he spends much of his average day in scheduled meetings, events, and calls, there is time to allow for a more creative environment that has helped make him the most productive President in modern history ...

Axios also revealed that Sanders indicated that, during his morning executive time, the president frequently takes calls — and often splits time between his residence and the Oval Office. As Sanders said via Axios:

The time in the morning is a mix of residence time and Oval Office time, but he always has calls with staff, Hill members, cabinet members and foreign leaders during this time. The President is one of the hardest workers I've ever seen and puts in long hours and long days nearly every day of the week all year long. It has been noted by reporters many times that they wish he would slow down because they sometimes have trouble keeping up with him.

Back in October 2018, Politico similarly obtained copies of the president's private schedule, which reportedly also revealed lengthy periods of executive time. A White House aid interviewed for Politico's piece suggested that Trump spent some of this time watching television and reading the newspaper — and then spontaneously scheduling meetings with staff based on what was in that day's news cycle. The White House did not comment on Politico's article at the time.

Overall, Axios' new piece reportedly reveals that Trump prefers to ensure that large parts of his day are left unstructured. As Politico noted, this certainly reflects a different approach to the job when compared with his most recent predecessor, Barack Obama, who kept a rigorous schedule of official meetings throughout his presidency.