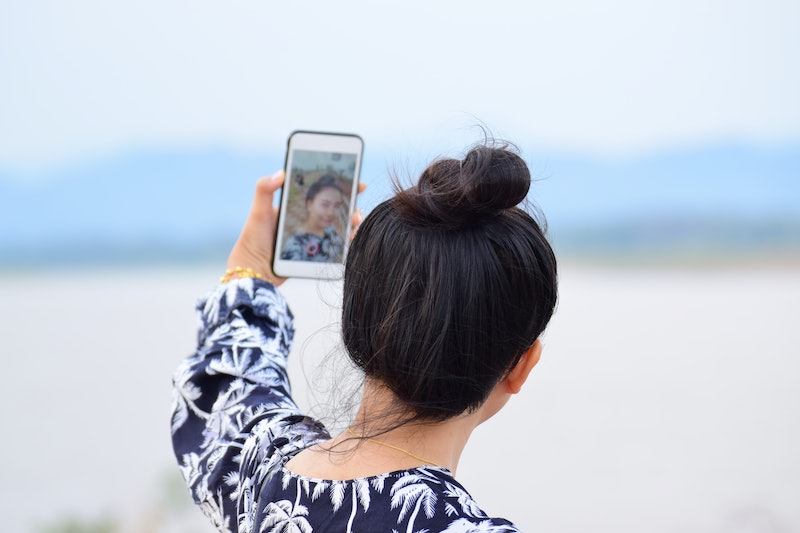 Your friends' social media photos may be looking a bit different lately, thanks to a popular app and a viral challenge. FaceApp's age filter lets you see what you might look like decades from now — and the related #FaceAppChallenge encourages users to share the results. Even celebs are having fun experimenting with the filter, but people are wondering what exactly FaceApp does with your information after privacy concerns surfaced.

As The Verge explained, the Russian-owned FaceApp has actually been around since 2017, when it first went viral for its various facial filters. Now, some people are concerned about specifically what the app is doing with their photos and associated data once the images have been uploaded. The BBC reported that FaceApp does upload your photo to its own server to edit your image as opposed to processing it directly on your phone, but the company said that this shouldn't be a cause for concern, even if it temporarily stores the photo.

"We might store an uploaded photo in the cloud," Yaroslav Goncharov, FaceApp's chief executive, said in a statement to the BBC. "The main reason for that is performance and traffic: we want to make sure that the user doesn't upload the photo repeatedly for every edit operation. Most images are deleted from our servers within 48 hours from the upload date."

As TechCrunch reported, FaceApp also addressed a myriad of other privacy concerns in its statement. For example, the outlet noted that the company emphasized that it only accesses photos that users choose to upload and doesn't pull any other images from people's phones. "We’d like to comment on one of the most common concerns: all pictures from the gallery are uploaded to our servers after a user grants access to the photos," the company wrote, per TechCrunch. "We don’t do that ... You can quickly check this with any of network sniffing tools available on the internet."

FaceApp also added that it doesn't "sell or share any user data with any third parties" and that it doesn't transfer users' data to Russia "even though the core R&D team is located in Russia."

That being said, many users are still concerned about what FaceApp might actually do with their uploaded images, especially considering FaceApp's lengthy terms of service. They read, in part:

You grant FaceApp a perpetual, irrevocable, nonexclusive, royalty-free, worldwide, fully-paid, transferable sub-licensable license to use, reproduce, modify, adapt, publish, translate, create derivative works from, distribute, publicly perform and display your User Content and any name, username or likeness provided in connection with your User Content in all media formats and channels now known or later developed, without compensation to you.

According to Vox, they essentially say the company can do whatever it wants with the photos. However, as Vox emphasized, there's not necessarily a reason to be more concerned about FaceApp than other online applications that use your photos. For example, the outlet noted, Facebook and Snapchat can access image metadata (information about a photo and its creation) that reveals a significant amount of personal information.

Overall, the best course of action when it comes to FaceApp — and all photo applications — is likely to do your research and decide what you are comfortable with. Being aware of these privacy concerns — and the company's response to them — is a first step.