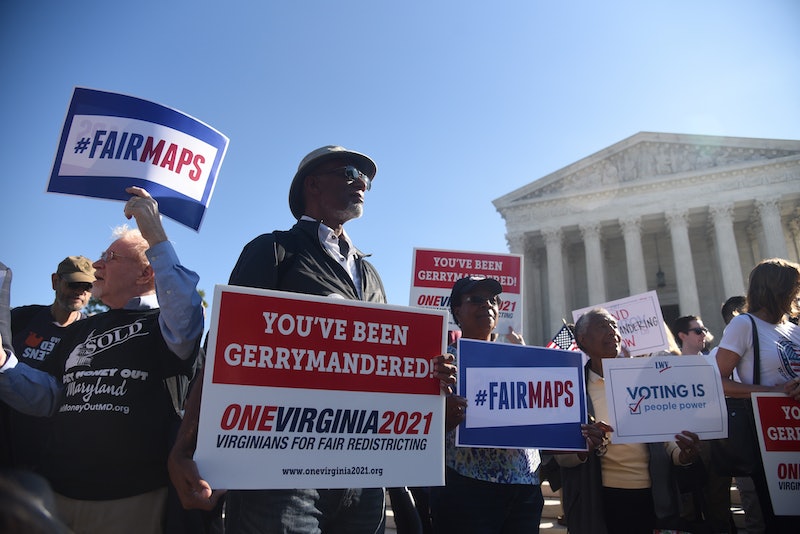 On Monday, a ruling from the U.S. Supreme Court halted Republican efforts to delay the enforcement of a Pennsylvania state court decision that the state's congressional map be redrawn. The state court had ruled in favor of redrawing after finding that partisan gerrymandering favoring the GOP played a large role in how electoral districts were created. Now that the Supreme Court has made its decision, it's important to take a closer look at what exactly gerrymandering is and how the Supreme Court's decision could have serious implications for the 2018 midterm elections.

According to Christopher Ingraham of the Washington Post, gerrymandering is a concept that involves "drawing political boundaries to give your party a numeric advantage over an opposing party." As the Post explained, in an ideal setting, electoral representation is proportional. This means that, if a certain percentage of a state's residents are Republicans and a certain percentage are Democrats, state electoral districts will each proportionally reflect those party preferences.

However, gerrymandering of electoral districts often results in non-proportional representation. Often, one party influences the drawing of electoral maps so that its voters represent the majority in as many districts as possible. This diminishes the voting power of the opposing party's supporters.

According to the New York Times, in the Pennsylvania case, the state court found that the state's 18 electoral districts favor Republicans, with the map "clearly, plainly and palpably” violating the state's constitution. Pennsylvania currently has 13 Republican legislators. But, according to the paper, experts believe that once the electoral map is redrawn, up to three of the seats could flip to Democratic representatives. Moreover, Vox reported that this number could be even higher, with a potential for up to four seats flipping once the gerrymander is eliminated.

The potential for flipping of congressional seats from Republican to Democrat could have massive implications for the 2018 midterms — and the prospects for party control of the House of Representatives. As Vox pointed out, Republicans only control the House by 24 seats and, a potential gain of three to four seats in one state alone represents a huge acquisition percentage-wise. If Democratic gains, even small ones, in other states are made as well, the Democrats could stand to regain control of the House. And, as Vox also reported, the U.S. Supreme Court's ruling makes it pretty clear that Pennsylvania's electoral map must be redrawn before the November elections, increasing the prospect for seat flipping.

However, while many experts are confident that the redrawn map will indeed help Democrats, some are hesitant to overestimate the impact of the new map. Indeed, as Vox reported, no one knows for sure exactly how the map will be redrawn. For example, Vox's Andrew Prokop noted that electoral analyst Sean Trende of Real Clear Politics has some reservations about the map's implications. As Prokop put it, Trende believes that, "if the new maps are drawn to try to make districts extremely compact while trying to avoid splitting existing political borders (like town lines)," it is possible that Democrats may not gain that much from the new electoral maps.

As The Hill reported, the Pennsylvania Supreme Court gave state officials until Feb. 9 to submit a newly-drawn electoral map to the state's governor, who then must submit it to the court. If officials do not submit the map by the deadline, the state court itself will redraw it.

Thus, time will quickly tell exactly how Pennsylvania's electoral map will be redrawn. And it should shed some key insight into exactly what type of inroads Democrats can hope to make in the state — and beyond — in 2018.