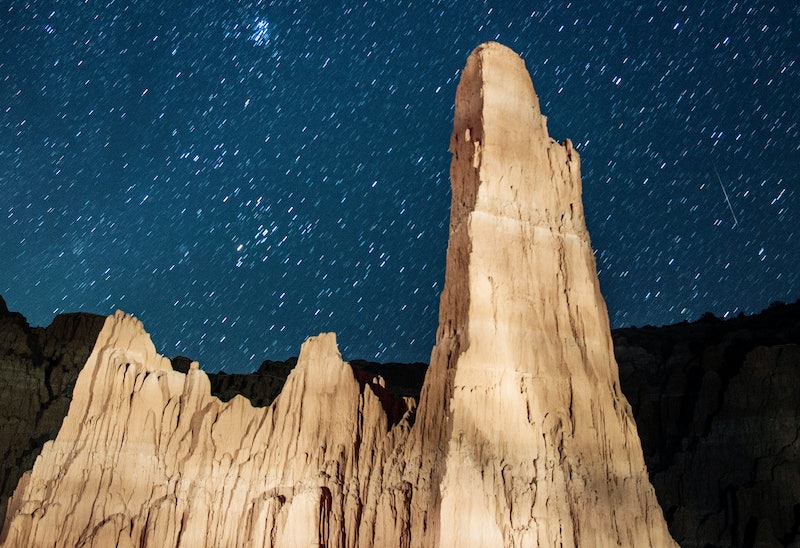 As a reward for 2018 being an epic dumpster fire, the universe has an end-of-the-year trifecta for you. And for once this cosmic event is a gift rather than a curse. Aside from the winter solstice being a powerful time to manifest, you'll be treated to a full moon and a meteor shower this weekend. The December full moon, known as the full cold moon, according to The Old Farmer's Almanac, coincides with the beginning of winter. What's more, the December 2018 full moon occurs Dec. 22, just one day after the winter solstice, a phenomenon that won't happen again until 2094.

To add to this magic, the Ursids meteor shower has decided to join the party and sine its brightest during the full moon. The website Magical Recipes noted that this isn't just any meteor shower. Stars will appear to fall from the sky to help you initiate change, overcome obstacles, and set intentions for the new year. While this meteor shower puts on a show every year at this time, some years are better than others.

"At its peak, in a dark sky, this shower offers perhaps five-to-10 meteors per hour during the predawn hours. But it’s been known to have good years, with 100 meteors per hour seen, and that’s why people watch for it," Earth Sky noted on its website. While the light of the full moon might make Ursids less visible, it's still a powerful time to set your intentions for 2019. Remember, whether you see her or not, Ursids is working behind the scenes.

Another interesting thing about the Ursids meteor shower, named after the constellation Ursa Minor, is that it's relatively new — it was viewed for the first time in the 20th century. "Ursid meteors radiate from very far north on the sky’s dome, near the Big and Little Dippers," Earth Sky noted, adding that the morning of Dec. 22, shortly after midnight, is the best time to see this display of falling stars.

If you want to witness the Ursids meteor shower, the website Time and Date offers some tips for optimal viewing. For those in colder climates, this is going to take some gumption, a thermos of hot chocolate, and a lot of layers. First, you're going to want to find a location without any light pollution like the country or the desert.

Although city dwellers won't see as many falling stars, if you can't get out of the urban jungle, it's still worth trying to see Ursids. Dress warmly, and be patient as it could take a bit for Ursids to show up. Bring a blanket, lie down, point your face skyward, and wait for the magic to happen. While you're waiting, go over your manifestation list and focus on visualizing what you want to attract in 2019.

You can also choose positive affirmations to repeat to yourself to ensure you end the year on a high note, and you may even want to consider gifting yourself with a set of I AM Affirmation Cards to keep the vibe going through 2019. "'I am' is the most powerful phrase you can speak because what follows 'I am' defines who you are in the moment," creator Tarisha Clark explained on her website. "So strive every day to reaffirm how incredible you are."

Magical Recipes also has some rituals you can perform during the Ursids meteor shower to get the most out of this cosmic display. When Ursids starts to rain down stars, the universe has heard your requests and is making a pact to work with you to make your dreams a reality. After the karmic and tangible pitfalls of 2018, closing out the year with meteor shower is a perfect way to turn the dark energy into light and salvage the last week of the year just in time for the holidays. Think of it as your gift from the universe.