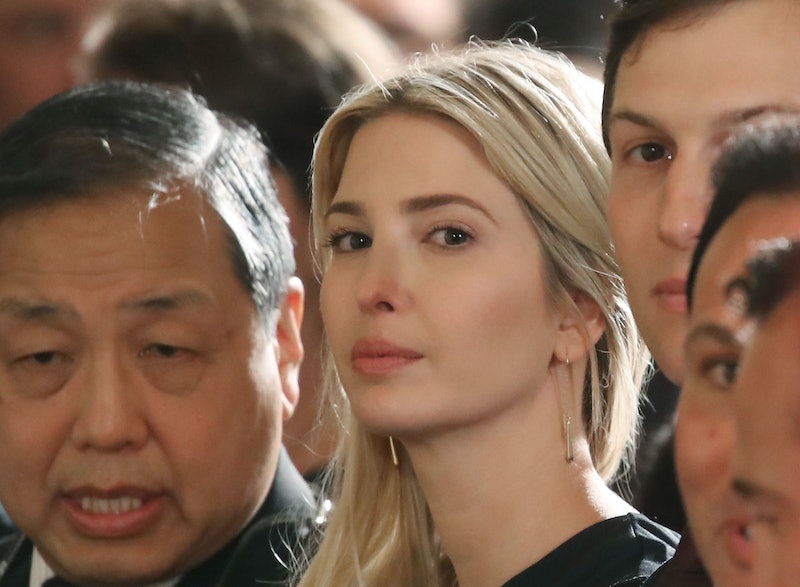 Another day, another roll-out of a far-right policy that goes against everything the president's high-profile, ostensibly liberal daughter claims to stand for. On Wednesday, President Trump announced a ban on transgender Americans serving in the U.S. military in a series of tweets, reversing his predecessor's policy, and throwing the careers of approximately 15,000 active servicemembers into doubt. And, rather unsurprisingly, Ivanka Trump has been silent on the transgender ban so far, despite her public reputation as a moderating influence on her father's policies, and a supporter of LGBTQ equality.

Back in Dec. 2016, Teen Vogue's Lauren Duca compellingly argued that President Trump was gaslighting America, by way of rendering virtually everything a contested claim, outside of the realm of factual analysis, and warping both his political opponents' and his supporters' sense of reality. With the news of the transgender military ban, it appears that people are getting fed up with Ivanka's own attempt at gaslighting; positioning herself as a social liberal who's fighting the good fight to moderate her father's worst impulses, all while those worst impulses are run wild for all to see.

Less than two months after Ivanka Trump tweeted a message of support for Pride month, saluting "the LGBTQ Americans who have made immense contributions to our society and economy," her father has announced a ban on transgender Americans serving in the military. And it's far from the first time this sort of thing has happened; Ivanka's claims of liberal influence are really just gaslighting at this point.

There's really no other way to put it. Dating back to the presidential campaign, Republicans, centrists, and left-of-center Democrats who feared her father's inflammatory rhetoric and instinct for far-right, draconian policy proposals were told they could take solace in the fact that Ivanka would be there to help smooth things over.

After all, so the argument goes, she's one of the most important and beloved people in his life. A trusted adviser, as well as a longtime donor to the Democratic Party, and a personal friend of Chelsea Clinton (or at least she used to be). She believes in climate change. She supports paid maternity leave. She champions women taking charge in the workplace. And, of course, she supports LGBTQ equality.

And yet, despite all the effort Ivanka's put into polishing up her father's image over the past year, it's now plainly clear that whatever influence she has, if any, isn't enough to make a difference when the stakes are highest.

In this case, she reportedly didn't even try. According to The Daily Beast, an unnamed senior White House official claimed she and her husband Jared Kushner decided to not attempt to dissuade the president from enacting the transgender military ban, deciding it'd be better for the "political capital to be spent elsewhere" due to the fact that their advice on LGBTQ issues has been so broadly ignored.

In short, there's no reason to take the many stories about Ivanka that leak out of the White House after some major decision seriously anymore. The ones that represent her either as working to steer the ship in the right direction, or doing her best when things don't work out her way.

Like when President Trump moved to withdraw from the Paris climate accords ― "After Climate Loss, Ivanka Moves On," the Politico headline said. Or when she was reportedly "struggling" to influence him after the sudden, initial roll-out of his immigration and refugee ban earlier this year.

Or, perhaps more relevantly, when the administration decided not to pursue a draft of an anti-LGBT draft order back in February. When that happened, Ivanka (and Jared too) claimed some credit in the press, cited by The New York Times as having "helped thwart" the anti-LGBTQ rights proposal. If you want the credit in the good times, you have to take the blame in the bad.

Simply put, the idea that Ivanka will save or protect anything that liberals really hold dear has rarely looked more hollow than it does right now. To the contrary, the dramatic failures, hard-right culture war policies, and explosive eruptions on the part of her father have made the reality of the situation pretty clear: her impact, if not her entire reputation as a political figure, looks like little more than a massive public gaslighting.

If it wasn't, maybe things would have gone differently these past several months. Maybe the administration wouldn't have stripped protections from transgender students. Maybe it would have issued so much as a single official statement acknowledging Pride month.

Maybe Mike Pence, a far-right, anti-LGBTQ social conservative, would not be vice president. And maybe, transgender Americans willing to dies for their country wouldn't have had their service dismissed in a series of tweets, while Ivanka saves her theoretical political capital for some other, unspecified thing.