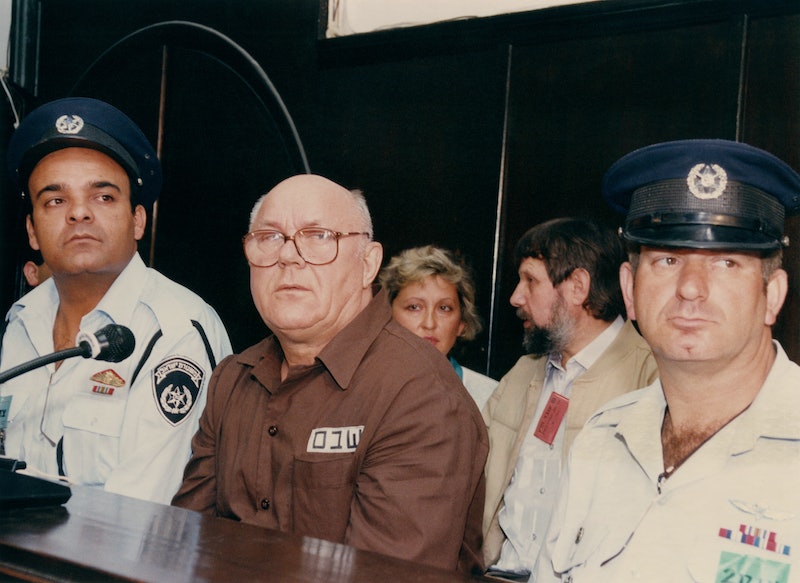 Netflix's latest true crime offering, The Devil Next Door, retraces the life of the late John Demjanjuk, a Ukrainian who emigrated to America before being suspected of and later charged with being a World War II criminal. The docuseries explores whether he was actually a notorious Nazi concentration camp guard named "Ivan the Terrible," or if it was simply a case of mistaken identity, as he claimed. Some members of Demjanjuk's family even appear in the show to advocate on his behalf — specifically, his son-in-law Ed Nishnic and his grandson. But while the rest of them haven't said much about the series, they've continued to defend his innocence offscreen. (Bustle reached out to Nishnic for further comment, but did not hear back before publication).

According to his New York Times obituary, Demjanjuk was born on April 3, 1920 in the Ukrainian village of Dubovye Makharintsy. In 1941, he joined the Soviet Army and was later captured by the Germans. While in a displaced persons camp, he met and married his wife, Vera Bulochnik, who then gave birth to their daughter, Lydia, in the camp. In 1952, they moved to Cleveland, where he worked as a Ford plant mechanic. There, he and Vera had two more children, John Jr. and Irene. Demjanjuk died in March 2012 and is survived by his wife and three children, in addition to seven grandchildren and two great-grandchildren.

But that's only the short story. While living in Ohio, Demjanjuk was accused of being a Nazi guard known as Ivan the Terrible, who was notorious for his intense cruelty toward prisoners. He is said to have run the gas chambers at the Treblinka extermination camp in German-occupied Poland, where an estimated 800,000 prisoners were put to death.

Demjanjuk denied the charges, but was extradited to Israel to stand trial in 1987. He was initially found guilty and sentenced to death, but the conviction was overturned five years later to due to reasonable doubt. He then returned to the U.S. — only to be taken to Germany in 2009 to stand trial for his alleged service at the Sobibor concentration camp. He was convicted on 28,060 counts of accessory to murder and sentenced to five years in prison; however, he died in a German nursing home in 2012, at the age of 91, while seeking an appeal.

Since his death, Demjanjuk's family has continued to stand by him. "It's all been lies from beginning to end," his daughter, Irene Nishnic, said through tears during his trial in Jerusalem in February 1988, per the L.A. Times. And in 2012, John Demjanjuk Jr. told reporters, "[John Demjanjuk] loved life, family and humanity. History will show Germany used him as a scapegoat to blame helpless Ukrainian POWs for the deeds of Nazi Germans."

That same year, Demjanjuk's widow, Vera, told Cleveland's Sun News that her grandchildren ask about him. "What can you tell them?" she wondered. Vera, too, has always maintained Demjanjuk's innocence and became very jaded during the decades-long legal battles. "I can't trust nobody now," she lamented. "How can you?"

More like this
Are Richard & Vika From 'Bling Empire: New York' Still Together?
By Karen Fratti
'Bling Empire: New York’ Star Tina Leung Has A Superhero Alter-Ego
By Alyssa Lapid
Love Is Blind’s Natalie Claims Shayne Signed Up For 'Perfect Match' While They Were “Still Together”
By Brad Witter
Everything To Know About A Potential 'Lockwood & Co.' Season 2
By Gretchen Smail
Get Even More From Bustle — Sign Up For The Newsletter
From hair trends to relationship advice, our daily newsletter has everything you need to sound like a person who’s on TikTok, even if you aren’t.