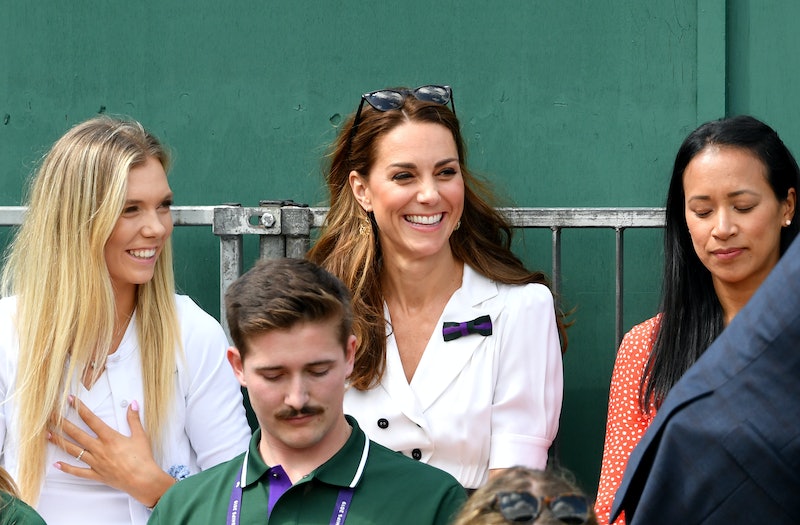 Summer in London means that the famous Wimbledon tennis tournament is back, and as usual there's been a royal spotting. This year, it was the Duchess of Cambridge. Of course, she looked summer perfect, but what does Kate Middleton's green and purple bow at Wimbledon mean? While the rest of her outfit was perfectly coordinated black and white, the colorful accessory stood out against her white dress.

According to Harper's Bazaar, during her appearance at Wimbledon, Middleton wore a classic shirt dress that fell to her mid-calf by designer Suzannah. The white dress featured black buttons down the front, short sleeves, and a collared neck. She paired the flowing dress with an Alexander McQueen bag, a bow belt, and black pumps. However, there was one pop of color in Middleton's look, the purple and green bow on her lapel.

As it turns out, the bow isn't just a cute accessory that matched her belt. The pin has a more charitable meaning. According to The Sun, the pin is actually a sign of Middleton's royal patronage of the All England Lawn Tennis & Croquet Club. Any female member of the club may wear the brooch to the event, so while cute, it's more than just an accessory.

It's not exactly a terrible coincidence though that the brooch just so happens to look perfect with her bow belt and dress.

The Sun reports that Middleton's patronage of the All England Lawn Tennis & Croquet Club actually comes directly from her grandmother-in-law, the Queen. The Duchess of Cambridge was gifted the patronage and is apparently a big fan of tennis making it a perfect fit.

Now that you've seen the bow up close, you may be thinking that it looks a bit familiar, and that's because this isn't the first time that the Duchess of Cambridge has worn it to Wimbledon.

Last year for the event, Middleton totally shook the crowd when, according to What Kate Wear, she donned a vibrant yellow Dolce & Gabbana dress for the event. Honestly, it was a major moment given that Middleton isn't known for wearing such a shockingly bright color, but the summer event made it totally appropriate. While the dress may have been center stage, on the frock, you can make out the same pin she wore to Wimbledon this year.

Middleton doesn't always wear the brooch when she attends matches at Wimbledon, though. She's gone without it in the past. In fact, while she wore the brooch with her yellow dress in 2018, she attended another match with sister-in-law Meghan Markle that same year wearing a white and black Jenny Packham dress. However, she chose to go without the brooch, perhaps because Markle isn't a member and can't wear the bow herself.

While Kate Middleton's Wimbledon bow may have just appeared as a cute accessory that matched her belt, it's actually a sign of her royal patronage work. Honestly, though, it doesn't hurt that the bow pin is an ultra-cute accessory.