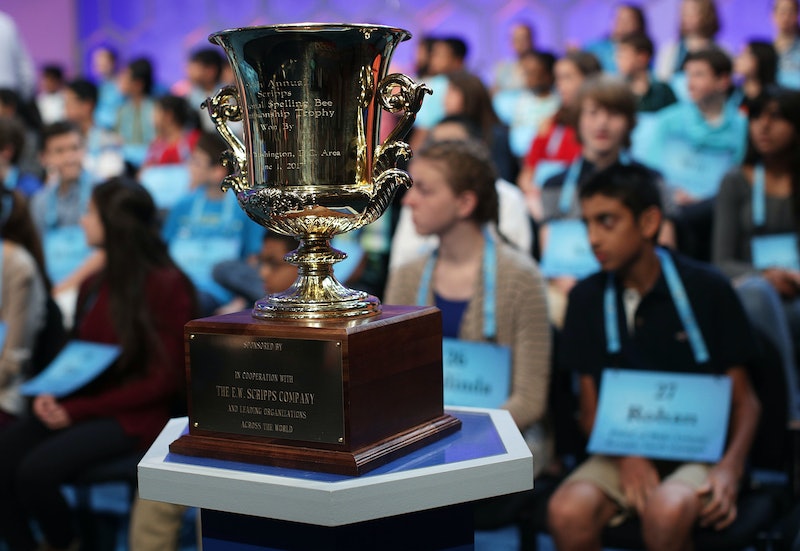 It's that time of year again: The Scripps National Spelling Bee culminated with a final round on Thursday, making viewers across the country feel vastly incompetent compared with a crop of impressive pre-teens. After several rounds of dizzying words and heartbreaking mistakes, it all came down to one word. This year, the winning spelling bee word was "marocain" — and if you have no idea what that is, you're not alone.

According to the Merriam-Webster dictionary, marocain is "a ribbed crepe fabric used in women's clothing." Its origin is French, and it literally means Moroccan crepe.

Marocain wasn't the only mind-boggling word in this year's bee. The competition also featured such difficult words as "chryselephantine," "sbrinz," and "whirlicote." Let's be honest: You don't know what those words mean, either. Chryselephantine means to be composed of or adorned with gold or ivory; sbrinz is a kind of cheese; and whirlicote is a term for a heavy and luxurious carriage. According to the contest's official rules, all spelling bee words are pulled from the Merriam-Webster Unabridged dictionary, the "final authority and sole source for the spelling of words." In other words, if you find issue with one of the bee's words, you have to take it up with, arguably, the most ubiquitous dictionary in the country.

Last year, two winning words emerged from the bee. In a rare but increasingly common tie, both Jairam Hathwar and Nihar Janga took the coveted title, correctly spelling "Feldenkrais" (a system of therapeutic body movements) and "gesellschaft" (a type of social relationship), respectively, at the end of the competition. Ties also occurred in 2014 and 2015.

Although the words of recent spelling bees may seem totally foreign, some of the earliest winning words in spelling bee history may seem more familiar. For instance the winning word in 1932 was "knack." In 1934, it was "deteriorating," and in 1935, it was "intelligible."

As it turns out, spelling the tough words can reap quite the reward. This year, the first-place prize for the bee was a whopping $40,000 from Scripps, plus a $2,500 savings bond from Merriam-Webster, a collection of reference materials, and a trip to New York City for a television appearance. Second place wins $30,000, and third place wins $20,000. The monetary prizes continue to decrease — but hey, cash is cash — for all spelling bee finalists. This year, winner Ananya Vinay, a sixth-grader from California, will take home that lucrative top prize — and it's all thanks to the correct spelling of marocain.