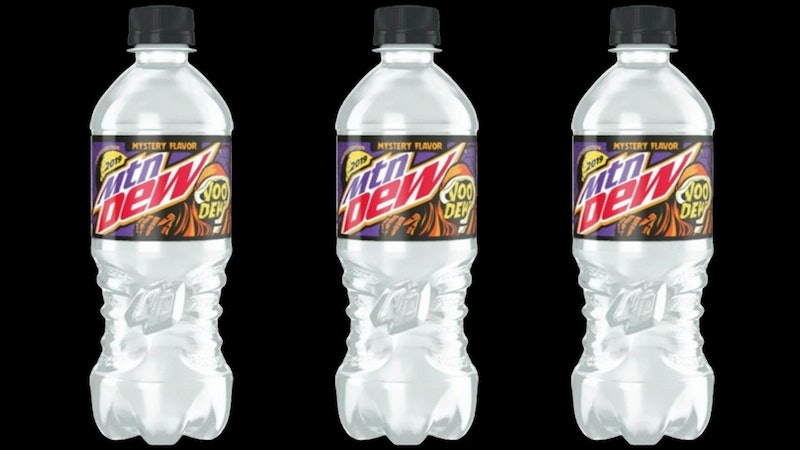 Summer is coming to an end, giving you full permission to embrace your spooky self. That’s right: it’s limited-edition Halloween product time, y’all. To start off the season, Mountain Dew has a new “VooDew” mystery flavor that will have you in the Halloween spirit.

Mountain Dew VooDew will be hard to miss in stores. According to Chew Boom, it’s available in two sizes: 12-packs of 12-oz. cans and 20-oz. plastic bottles. The 12-packs are a bright purple, decorated with ~*spooky trees*~ and a grim reaper-esque character that, in place of a face, has the words “VooDew” coming out of its hood. However, it is the 20-oz. bottles that lend themselves to the most spooky characteristic of this Dew flavor: The soda is clear.

A la white Airheads or the white Skittles, this mystery soda flavor bears no color. Unlike its neon yellow-green parent, Mountain Dew VooDew’s color gives you no hint as to what the soda will actually taste like. Of course, that hasn’t stopped people from trying to guess.

News of the Mountain Dew VooDew flavor first spread when fans (also known by the PepsiCo marketing team as members of “Dew Nation”) started sharing photos of the flavor packs on Instagram and Twitter. Some fans swear it tastes like “Cotton Candy mixed with hints of Candied Apples.” Others are convinced it’s a mix of cream soda and citrus, something like an Orange Creamsicle. Others still are calling “candy corn” given the theme of the soda.

If you want to go down a surprisingly pleasant rabbit hole, there is an entire Reddit thread dedicated to the new Mountain Dew VooDew. It’s full of genuinely helpful comments on where to find the limited-edition flavor, what people think it tastes like, and just how much people in the /r/mountaindew subreddit love their Dew. (Also, TIL there is an entire subreddit dedicated to Mountain Dew.)

Per Delish, the soda is expected to officially drop in the coming week, on Aug. 26. However, fans have already spotted VooDew at Hy-Vee, Walmart, and other retailers that typically sell Mountain Dew. (According to Reddit, some markets got a slightly earlier release date of Aug. 14.) In the meantime, you can scroll through other people’s guesses, excitement, and genuine relief that the soda does not taste like pumpkin spice.

This all begs the question: What does original Mountain Dew even taste like? Think about it for a second. It’s not a standard lemon-lime citrus soda like your Sprites, Sierra Mists, 7Ups. On the Mountain Dew wiki fanpage — a thing that exists and a reminder that the internet goes deeper than we even know — its flavor is listed first as “citrus,” then as “yellow-green.” This is both unsettling and the most accurate description of Mountain Dew. It tastes like neon yellow-green looks.

In 2015, Buzzfeed’s Venessa Wong asked the same question to someone who would know: Greg Lyons, vice president of marketing at Mountain Dew. Wong asked Lyons to what color Mountain Dew actually is. Is it more of a yellow-green or a green-yellow or toxic delicious sugar sludge? “We don't try to say what color the product is internally,” Lyons told BuzzFeed News. He first called it “Mountain Dew color.” Then, he “reluctantly” described it as “neon.”

“That's if you're forcing me to describe it. 'Mountain Dew color' is in my words,” Lyons continued. “If you force me to use an adjective, that's what I'd use. But I'd prefer, if you write about it, it to be Mountain Dew color. Because there's not really a color we call it.”

So, it’s orange juice-y. It’s citrusy. It’s chemical-y. We all know the truth: that “Yellow 5” is doing some heavy lifting in the flavor department. Hopefully Mountain Dew VooDew's flavor will be a little easier to pin down.