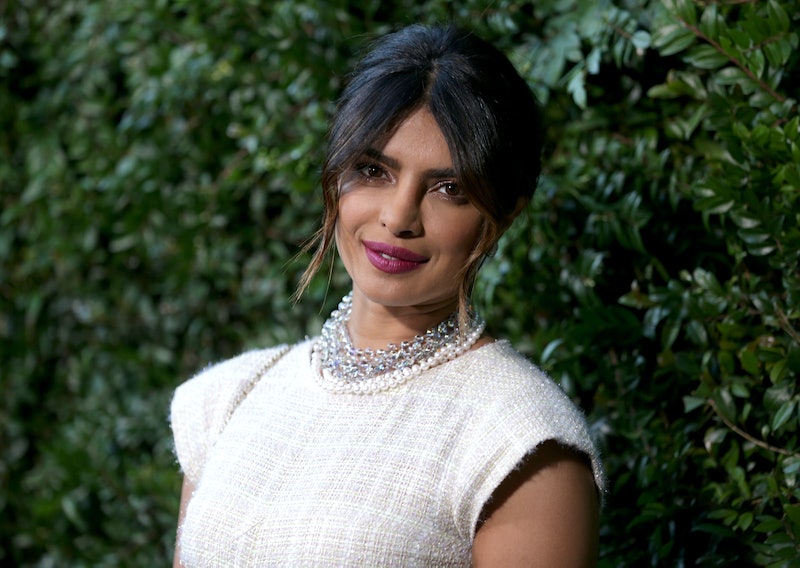 Add another couple to the list of reported whirlwind engagements for 2018. Though the pair has yet to officially confirm their rumored engagement status, all signs of Nick Jonas' newest relationship seem to say he could be heading down the aisle soon. The latest clue comes from a Bollywood star's social media page: Priyanka Chopra's engagement ring might have just been revealed by a Tuesday night post from a fellow Indian actress.

The public's first look at what many believe is Chopra's engagement ring comes about three weeks after reports first came out that Jonas had popped the question. According to People, when Jonas decided to take the plunge, he reportedly shut down a Tiffany & Co. store to pick out the perfect ring for Chopra, selecting what appeared to be a customized "cushion cut diamond with tapered baguettes."

Chopra's friend, Bollywood star Raveena Tandon, 43, gave fans what looks to be a sneak peek with a couple pictures of the two on Instagram. In the photos, Chopra has her arm around Tandon, with her left hand resting clearly across her friend's shoulders. Her ring finger is tilted slightly down, but the location of the ring is as clear as the diamond in it. In the post, Tandon captioned the photo, "Peecee and I getting our pouts in order!" The pictures garnered hundreds of comments as well as 33,000 likes in the span of 8 hours.

The former star of Quantico is 36 years old, 11 years older than her reported fiance, and rumors from entertainment news outlets suggest that the two got engaged at the end of July 2018, just after a couple months of dating. According to Us Weekly, Jonas proposed while the two were celebrating her birthday in London at the time.

The Indian news outlet DNAIndia has reported that Jonas and Chopra's engagement party is supposedly happening this weekend. Because of that, families from both sides could be traveling to India to celebrate. More specifically, Jonas and his family are apparently meeting Chopra’s parents. Those closest to the 25-year-old pop artist will be hopping on a transatlantic flight for the occasion, which will include a meeting with Chopra's mother Madhu and her brother Siddharth, People reported. Jonas himself has apparently already met Chopra's family from an earlier trip to Mumbai in June.

“His friends and family have never seen him like this, and they’re all really excited for him,” a source with People said. “He’s definitely very serious about her."

The couple's relationship status was first confirmed in an Instagram post by Jonas on June 22, in which he captioned it, "OMGGGGG MY HEART." Laid over the video of Chopra giggling toward the camera is simply the word "Her."

Jonas' rumored engagement comes three years after his split from Olivia Culpo in 2015, but he's not the only one hearing wedding bells in the family. His brother Joe announced his engagement to Sophie Turner, of Game of Thrones fame, in October of 2017, according to Billboard. Turner's stunning engagement ring has been captured and photographed clearly ahead of her wedding. Now, hungry fans are hoping the same will happen for the glittering rock on Chopra's hand, so they can make sure they don't miss a detail before the big day.