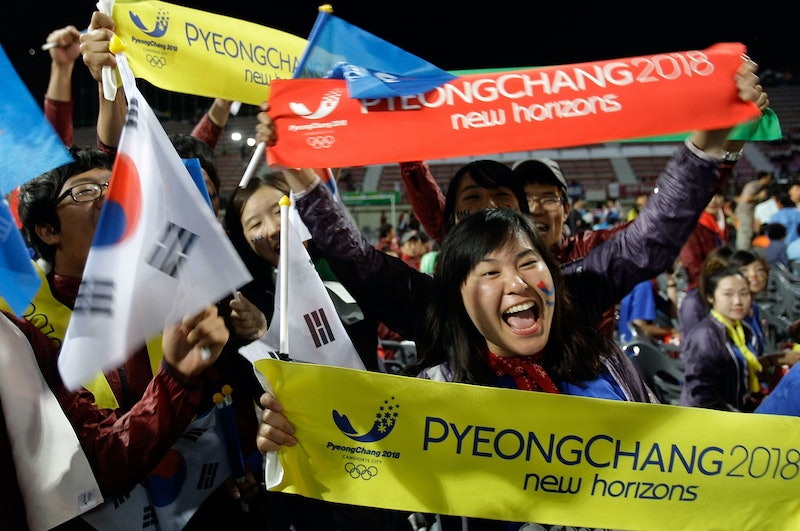 As athletes, spectators, and world leaders alike flock PyeongChang during the 2018 Winter Olympic Games, people might be wondering about the history behind PyeongChang and the South Korean city's historical significance. Hosted in South Korea for the first time, the winter games in PygeongChang welcome nearly 30,000 athletes from dozens of different nations and are taking place between Feb. 9 and Feb. 25.

PyeongChang translates into "land of prosperity" in Korean and the city itself is located 50 miles south of the Demilitarized Zone in the Korean Peninsula, which separates North and South Korea. In order to prepare for the games, PyeongChang has been stylized as "PyeongChang" for the first time in order to avoid confusion with the North Korean capital Pyongyang. Prior to that, the "C" was not capitalized.

Home to several Buddhist temples, PyeongChang is located in one of the least developed provinces in South Korea: Gangwon. More specifically, it's in the Taebaek Mountains region. For the Winter Olympics, the 13 venues in which the games are held are being split between PyeongChang and the neighboring city Gangneung. Since the majority of PyeongChang's region is made up of mountains and hilltops, it makes the city an ideal destination for the winter games. In fact, PyeongChang's slogan, "Happy700 PyeongChang" refers to the city's average elevation of 700 meters.

With a population of 43,000 PyeongChang prevailed over Munich, Germany and Annecy, France to host the games back in a 2011 decision. In a testament to national pride, villagers in PyeongChang stayed up all night celebrating with fireworks when the decision was announced.

PyeongChang contains several abandoned coal mills, bunkers, and minefields left over from attempts to ward off any potential invasions by its neighbor North Korea. The county also contains one of the South Korea's 17 casinos, which were established in attempts to boost the province's economy. Residents began looking to the mountainous region for its potential to host winter sports, including the 1999 Winter Asian Games. The county previously made two bids for the winter Olympics in 2010 and 2014 but eventually lost to Vancouver, British Columbia and Sochi, Russia respectively.

Two of the county's ski resorts, for which it's well-known, will serve as venues for the Olympic Games. The $1.5 billion Alpensia Ski Resort contains six slopes for snowboarding and skiing events, while the Yongpyong Resort, the biggest ski resort in South Korea, will host the alpine skiing events.

For spectators outside of PyeongChang who are hoping to watch the games, a new high-speed rail system called the Gyeonggang Line has been built between Wonju and Gangneung. This means that PyeongChang is only 80 minutes of travel time away from Seoul, South Korea's capital.

The path to the Winter Olympics has not been an easy one, with South Korea grappling with political scandals in the year leading up to the games. Former President Park Geun-hye was impeached in Dec. 2016 by the National Assembly on charges of corruption, sparked by weeks of protest in Seoul. Geun-hye was then replaced by President Moon Jae-in in May 2017.

The county's proximity to North Korea is also not lost on its inhabitants. Many of the residents of PyeongChang are the children of refugees who fled there during the 1950 Korean War, settling in the county to be near their homeland on the off-chance their the country reunified. In the month leading up to the Winter Olympics, North and South Korea had agreed to discuss cooperation between the countries. North Korean President Kim Jong-Un has confirmed the country will send a delegation to compete in the games.

In regards to reinvigorating PyeongChang's local economy, the Olympics were expected to lift the national economy by creating 230,000 jobs and generating $20 billion in investments. Poor ticket sales six months leading up to the games, however, have created financial hurdles. The low sales were thought to have been attributed to the county's proximity to North Korea, which has amped up its nuclear missile testing in the last year.

More like this
Jude Bellingham’s Superstar Football Talent Runs In The Family
By Maxine Harrison
I Visited Remedy Place, The Social Club Transforming The Wellness Industry
By Rachel Lapidos
Your December Astrological Forecast
By Nina Kahn
10 Holiday Fashion Picks Our Senior Editor Can't Stop Wearing
By Kelsey Stiegman
Get Even More From Bustle — Sign Up For The Newsletter