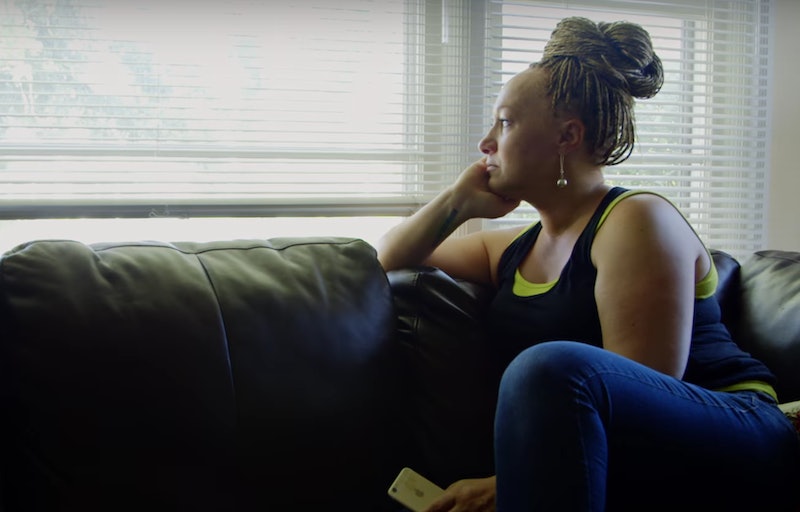 Just as the world was beginning to collectively forget about Rachel Dolezal, Netflix has released a documentary, The Rachel Divide, all about the controversial figure. The film gives a glimpse into Dolezal’s life after the scandal surrounding the reveal that she faked being African American, and the subject herself explains in the doc that it's meant to be her chance at redemption. Well, that might not be the case, as it turns out that Dolezal hasn’t changed much since she became an infamous public figure a few years back. Need proof? Just look at the what Rachel Dolezal's new name means — Nkechi, short for Nkechinyere, is a West African name that means “gift of God.” Yup, really.

Dolezal’s name change — her full new name is Nkechi Amare Diallo — came as a shock to many, as it shows that despite how many people of color explained to her that you can’t just adopt a race and doing so is harmful to black people, she seems to have not changed her ways. As author Luvvie Ajayi explained in her blog Awesomely Luvvie, Dolezal continues to appropriate black culture to the maximum potential, choosing “one of the blackest names in history.” Ajayi pointed out that not only does Nkechi mean “gift of God,” coming from the Igno tribe in Nigeria, but Diallo also can be traced to African roots. Diallo is Fulani and can be traced to both Guinea and Senegal. It means ‘bold,’” said Ajayi.

The author went on to point out that many Nigerians in no way accept Dolezal’s name change and want nothing to do with her. “I would like to take this time to speak on behalf of Nigerians everywhere to say we do not claim, nor one-third claim Rachel Dolezal and her new name," wrote Ajayi. "We reject her attempt to attach herself to our glory, through that first name. And we bind it by holy ghost fire that this classless wonder of a being will not prosper at sullying our country name. It is not my portion to know this woman as my country kin, as she is an enemy of progress.”

The Independent’s Nishaat Ismail also wrote an essay explaining why Dolezal’s name choice is absolutely wrong. According to Ismail, it all boils down to this: “She will never be able to relate to those who have had to grapple their way through their entire lives to get those who hold the power to determine the fate of their education and careers to look beyond their names.”

The Independent also claimed that Dolezal “changed her name in part to give her a better chance of landing work from employers who might not be interested in hiring the controversial Rachel Dolezal, a name she still intends to use as her public persona.” However, if this was the reason, it backfired tremendously, since Dolezal announced her name change on social media. It let everyone know of her supposed "new life" and caused her even more scrutiny, as she adopted a moniker that is tied to a race and culture that isn’t hers. In fact, Dolezal even used her name change to promote her memoir In Full Color on Twitter.

It's sad to say that, as both the Netflix documentary and Dolezal's 2017 memoir show, Dolezal hasn't learned much in the past two years since her story came to light. Her actions and appropriation are clearly harmful to many people (including her own family, as the documentary depicts), but she has gone forward with her controversial decisions nonetheless. Dolezal may have changed her name to one that stems from African roots, but that will never absolve her from being a white woman pretending to be black.