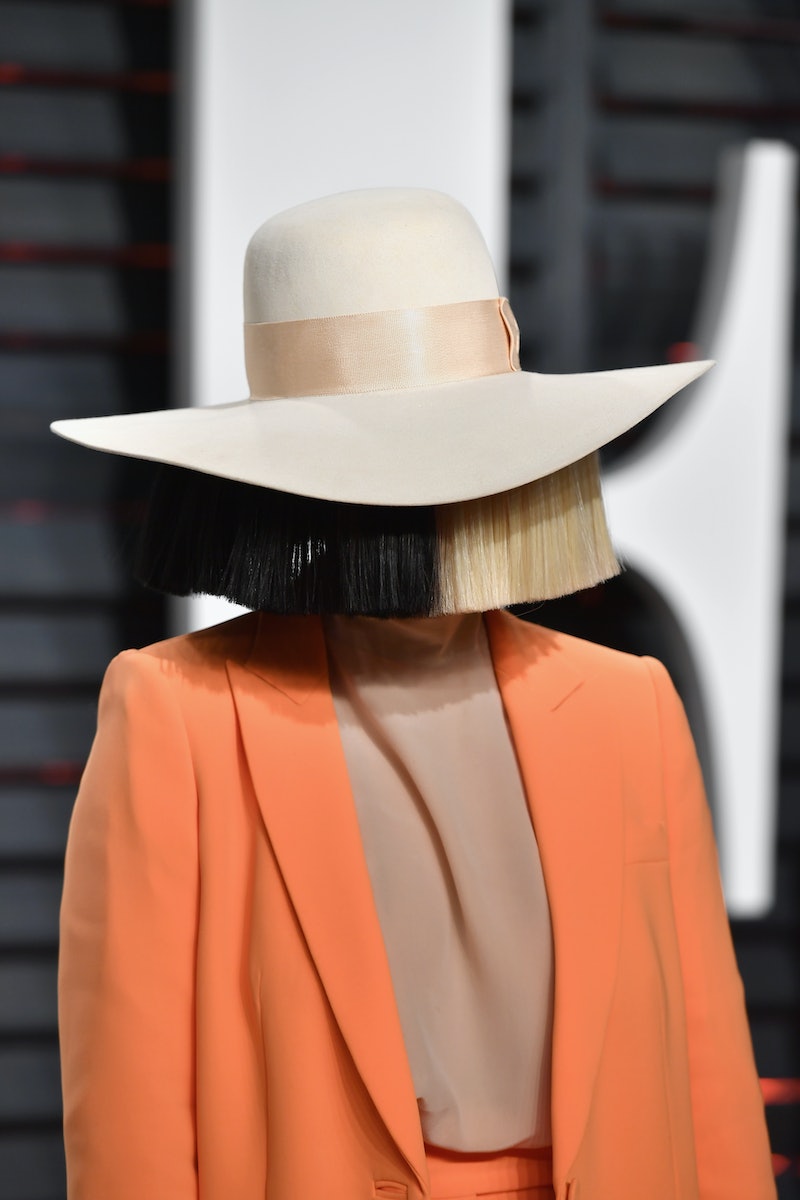 It's rare to see the artist Sia without her iconic two-toned mass of hair, to the point where fans wonder what does Sia look like without her wig? The answer to that question has been given this week, when the artist stepped out sans disguise to Netflix's Ozark tastemaker party. Hosted in Los Angeles on Aug. 14, the Australian artist left the usual blonde-and-black blunt bob wig behind and went as her real self to the event. Sporting middle-parted, shoulder length hair, her locks were wavy and blonde. She wore an all-black ensemble, sporting a one shouldered top and black flared pants accented with a belt for interest.

The "Chandelier" singer has been sporting a disguise for some time, mainly because she wants to create music without being judged for her looks. Being part of the entertainment industry means that you get scrutinized on your appearance almost as much as for your artistic abilities, and Sia decided to take that element out of her equation by concealing herself behind a helmet of hair. She wears it everywhere from red carpet appearances, to concerts, to press events, and it's rare to see her without it. While it's difficult to have your looks dissected at all hours of the day, another reason she chooses to wear it is because it gives her a sense of anonymity, which is rare for celebrities and A-listers.

In 2015, while on the Ellen DeGeneres Show, she explained to the audience why she decided to reach for the now-iconic hair disguise. “Well, it’s so that I can go to Target and buy a hose if I want to, and/or if I’m in need of a restroom and I can’t find one, I could go by the side of the road and nobody would be following me with a camera trying to get ‘the shot," she shared.

She recalled another incident that made her cringe away from recognition and fame when doing an interview with New York Times in 2014, saying, "Once, as my friend was telling me they had cancer, someone came up and asked, in the middle of the conversation, if they could take a photograph with me. You get me?”

She came up with the idea when she was an indie singer and before she made it big, and got the inspiration from Amy Winehouse's beehive bouffant. "I had the idea that, well, if Amy Winehouse had been the bouffant, maybe I was the blond bob," she shared with Interview. "Maybe I'll make myself just a blond bob."

It was a way to take control of her image and lead a semi-normal life, even though she put herself into the public eye. "So when people say, 'Show your face, you're not ugly.' I want to say, 'I know. I'm not doing it because I think I'm ugly; I'm trying to have some control over my image. And I'm allowed to maintain some modicum of privacy,'" she explained.

Not only does she don the wig, but she often also opts for stand-ins, like actress Kristin Wiig appearing for her at the Grammy's, and actor Shia LeBouf and child dancer Maddie Ziegler substituting her in her music videos.

But now it seems that Sia is becoming more comfortable with showing her face. Whether this was a one time thing or a new trend is up to debate, but no one can fault her for doing what's best for herself and reaching for the platinum wig.