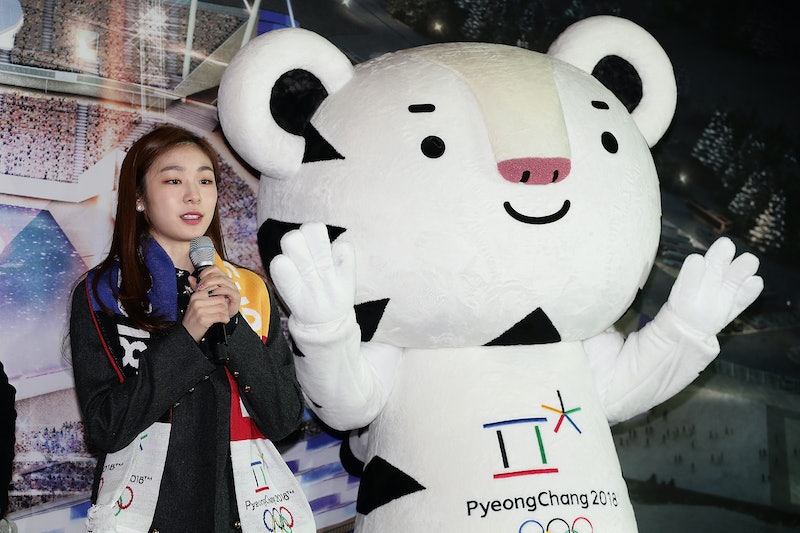 If you're one of the fans itching to learn what mascot will represent the 2018 Olympic Winter Games, your wait is over. Soohorang, the 2018 Winter Olympic Games mascot, is officially here. And it is adorable.

The mascot for the winter games that will take place in PyeongChang, South Korea, is a plump white tiger with a stout nose. In addition to its visually heartwarming appearance, Soohorang also has a deep cultural meaning for Koreans. Culturally, the 2018 Winter Olympic Games said, "Soohorang" is derivative of two separate words. "Sooho" means protection or shielding in Korean while "rang" is the middle part of the word "ho-rang-i" which is Korean for "tiger."

Together, "Sooho" and "rang" point to the good luck the mascot hopefully brings to the Olympic players. The website added that the last part of the traditional Korean song title — "jeong-seon a-ri-rang" — is also part of the word "Soohorang." In simple words, the cute little tiger is a cultural symbol for prosperity and protection.

Although Soohorang made its official appearance in January 2018, the executive board for the 2018 Olympic Winter Games had approved of the mascot in June 2016. The Olympics website stated:

In selecting a tiger as mascot, the PyeongChang 2018 Organising Committee chose an animal closely associated with Korean mythology and culture. The tiger has been a familiar figure in Korean folk tales as a symbol of trust, strength and protection.

The website also added, "In mythology, the white tiger was viewed as a guardian that helped protect the country and its people. The mascot’s colour also evokes its connection to the snow and ice of winter sports."

According to Olympic.org, Gunilla Lindberg, who works as the head of the International Olympic Committee's (IOC) Olympic Winter Games PyeongChang commission, said that the mascot was a "beautiful animal, strongly associated with Korean culture." "It also symbolizes the close link between the Olympic Winter Games and the natural environment," she added. "I’m sure the new mascot will be very popular with Koreans and people around the world."

Historically, the IOC has introduced a variety of (pretty cute) mascots over time. For example, during the 2016 Summer Olympic Games in Rio, the official mascot for the event was "Vinicius." Vinicius looked like a feline hybrid but was a "mix of different Brazilian animals." He represented "the diversity of the Brazilian people and culture, as well as its exuberant nature," according to the Olympics official website.

In 1980, the mascot for the Summer Olympic Games in Moscow, Russia, was a sweet little bear commonly known as "Misha." His full name was "Mikhail Potapych Toptygin" and was culturally popular among Russians through folklore. For history fans, there's a whole list you can look into. From 1968 to 2018, the official Olympics website offers a glance at the historical mascots that became the official symbols for the games.

For the Olympics, mascots like Soohorang, Vinicius, Misha, and others hold a cultural importance. The website says its inspiration for mascots comes from the word itself that "appeared in French dictionaries at the end of the 19th century." In other words, Soohorang, the trustworthy tiger, isn't going anywhere in the near future; the organization says it "has a dauntless spirit and passion but also is a trustworthy friend who protects the athletes, spectators and all participants in the Olympic Games."

If you want to see more of Soohorang, you can get a lot more than just a glimpse of it at the scheduled events for the 2018 Winter Olympic Games. The games will start on Feb. 9 and will end on Feb. 25 while various competitions will take place at 13 different venues, according to CNN. Keep your eyes open for the white tiger.