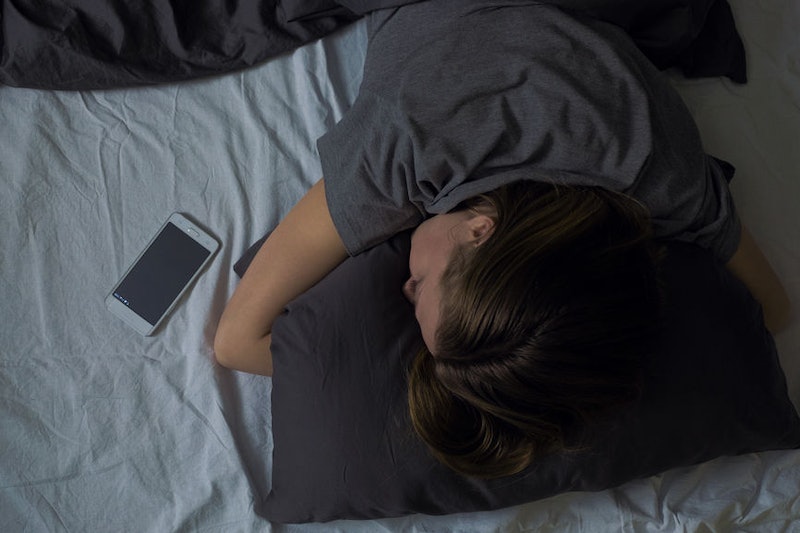 As easy (and heavenly) as sleeping sounds, a lot of issues can arise when it comes to getting some shut eye, and the things your brain can do when you're asleep are both impressive and concerning. I mean, unconsciously babbling your secrets out loud in your sleep is one thing, but what if you threw technology into the mix? Yep, sleep texting is actually a thing, and it's on the rise. So, what does texting in your sleep mean and how can you avoid doing it?

According to Verywell Health, sleep texting is a recognised part of parasomnia — a disorder that tends to occur when you "transition from the deepest stage of sleep [...] to a lighter stage of sleep mixed wakefulness." This usually occurs during REM sleep (the stage of sleep where you're most likely to dream) where you're not fully awake but the areas of your brain that allow you to think and move may be turned on, resulting in "semi-conscious or semi-purposeful behaviours".

While many suffer from bouts of incoherent text speak, a recent study found that cases of sleep texting are more common in young people, mainly students. Published in the Journal of American College Health, researchers at Pennsylvania's Villanova University found that through surveying 372 students that more than a quarter of them had text in their sleep, and 72 per cent of the respondents had no memory of sending a text in the first place.

This may sound absurd if you're not so reliant on your phone, but if you rely on your phone and messaging friends, updating your social media, and sending emails are part of your daily routine, messaging in your sleep could become a serious issue. "People are doing so much during a normal day that it can mean that they feel like they're 'on call' even at night," sleep specialist Dr David Cunningham told The Daily Mail. "Because it's so easy to receive emails constantly, and get notifications from smartphones, it becomes more difficult for us to separate our waking and sleeping lives."

Speaking of notifications, it seems as though the sound of receiving a message or email is what spurs sufferers to send out a message in their slumber. "The chime or alerting sound that would signify a new text message during wakefulness may similarly prompt our attention during sleep," VeryWell Health reports. While some may reach for their phone and spout out incoherent texts to their loved ones without hearing a chime, it seems as though sleep texting is usually in response to hearing a notification that you've become so attuned to.

So, what can you do to prevent yourself from sending out embarrassing or unintelligible messages? Put your phone in another room, and take a break from your digital life for at least an hour before bedtime. Sounds simple, but if you're like me and use your phone as an alarm clock, I usually put it on the furthest side of my room on silent, and leave it on a combo of Do Not Disturb and Airplane Mode to minimise the distractions.

Sure, there are times where I break that habit and leave it on my bedside table, but I still make sure it's face down and on silent. You won't be receiving any sleep texts from me, that's for sure.