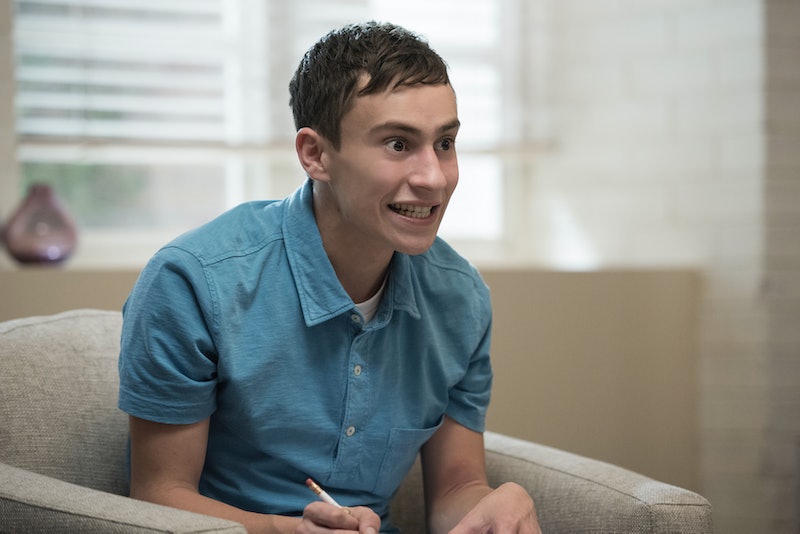 Crafting a single, accurate portrayal of living with autism spectrum disorder is an impossible feat. The term serves as an umbrella description for many unique types of specific conditions that affect different people in different ways. Netflix's Atypical sets a lofty goal for itself by attempting to tell the story of a young boy growing up with autism. Unfortunately, many experts seem to believe the show missed the mark. What does the autism community think of Atypical? Judging from reviews and tweets, some individuals are not thrilled with the series.

In a media climate where ASD is not often represented — and is rarely represented sensitively — several choices made by the Atypical creative team rubbed members of the autism community the wrong way. One of the largest points of criticism came from the casting of Keir Gilchrist as protagonist Sam. Sam has autism spectrum disorder. Gilchrist does not. Unfortunately, it's not surprising for a show or film to not cast an autistic actor in an autistic role. It's disappointing, however, for a show promoting itself as increasing visibility for people with ASD. For a company like Netflix, which has run PSAs on the importance of representation, this choice appears to be a oversight. Gilchrist's casting is enough for the autism community to take umbrage at the show, but that's not the least of the criticism. Bustle has reached out to Netflix, who declined to give an official statement.

As if casting a neurotypical actor in an aneurotypical role wasn't enough to upset the community, some reviewers are seeing a major problem in the characterization of Sam. Matthew Rozsa, who is autistic himself, explained in his Salon review:

"Sam is a somewhat newer, increasingly popular stock character — the high-functioning Aspie. Look around and you’ll see them almost everywhere in pop culture these days, nearly always as a white, heterosexual male. (Autism — which can affect non-white, female and LGBT individuals as well as white, straight men — doesn’t discriminate in real life.)"

Rozsa uses characters like Sheldon of The Big Bang Theory, Abed of Community, Sherlock of Sherlock, and Sugar Motta in Glee as examples of this emerging archetype. (Though not all of them are white males.) Per Rosza, this archetype collects details about ASD and, at its worst, turns the disorder into a collection of TV-friendly quirks. He observed that many of Sam's actions "aren’t classic signs of autism — they’re violent, creepy, cruel and make the autistic character seem like a monster."

Autistic actor Mickey Rowe pointed out in Teen Vogue that "onscreen representation isn’t the same as behind-the-scenes representation, especially if that camera-facing depiction is flawed." Without any autistic writers, directors, or producers on staff, Atypical, in Rowe's opinion, doesn't have the tools necessary to achieve its goals. A show can't possibly portray the experience of having ASD without having anyone who lives that experience helping to shape the narrative. (USA Today reported that showrunner Robia Rashid consulted with a professor from UCLA's Center for Autism Research and Treatment. An actor in a supporting role is autistic, as well. )

Atypical also fails, Rowe writes, in attempting to balance its comedy with the reality of living with ASD. He said:

"I often wear headphones or ear buds. A lot of autistic people do, as they often have sensory processing disorder, too. Atypical’s first episode features an entire scene devoted to Sam's headphones in a restaurant, but the audience is conditioned to laugh at him for it. How horrible if young autistic people watch this and feel ashamed for doing something that helps them to think and function in the world."

Atypical hopes to find the humor in growing up with ASD. Instead of creating opportunities for the audience to laugh with Sam, the audience may be more encouraged to laugh at him. Sam is told that "nobody's normal," but the show frames Sam in a way that him not acting normal is supposed to be hilarious.

By inadvertently making fun of group that is already mocked, Atypical seems to have offended some of the very people it hoped to represent.