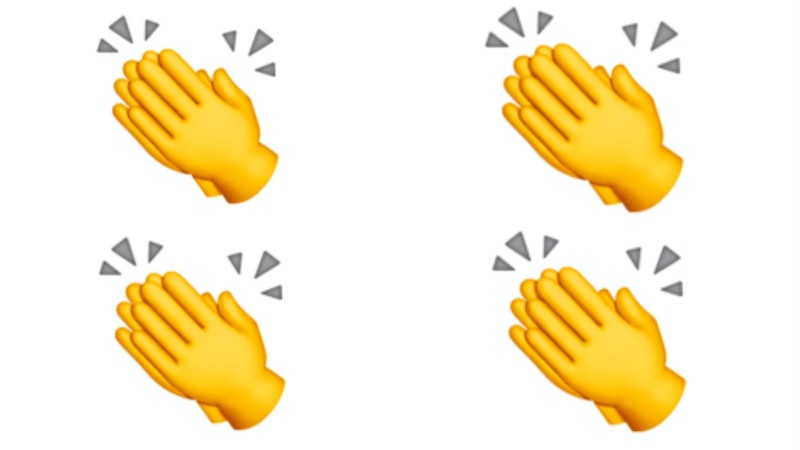 The clapping hands emoji: When used repetitively in a row, it signifies applause, but as any social media user by now understands, that is not the emoji's primary placement in the world of Twitter. You may be wondering, what does the clapping hands emoji mean when used after every other word in a tweet? And I don't blame you. There seems to be quite a bit of honest confusion as to the significance of this virtual gesticulation on Twitter (and entire Reddit threads devoted to its explanation), so before you go filling your tweets up with claps, it's important to understand where it came from and what it truly means.

A 2015 piece published in Complex, defined the meaning of handclap on "#RapTwitter" as "Extra emphasis when making a point, declaration and/or statement." Without deeper investigation, it's easy to write off the clapping hands emoji as another ephemeral Twitter trend used to emphasize opinion tweets, but as Kara Brown at Jezebel points out, the meaning goes much deeper than that. Before being co-opted by the Twitterverse, clapping on every syllable was (and still is) a real and powerful action before the internet ruined it.

"This — this clapping on every word for emphasis — is something that I have done since I was a cantankerous youth," Kara Brown explains in her piece for Jezebel. "To this day, if you catch me at a bar trying to explain to some man [insert the exhausting laundry list of topics here] I will almost certainly be doing the black girl clap. BECAUSE THIS IS A THING MANY OF US DO AND HAVE BEEN DOING LONG BEFORE THE INTERNET TRIED TO MURDER ME WITH ITS SELF-IMPORTANCE."

This emphasis clap, or, as Urban Dictionary has dubbed it, the "Ratchet Clap," quickly made its way into the mainstream. Examples of it can be seen everywhere from SNL's 2016 Sound of Music sketch with Ariana Grande to a bit titled "Black Lady Sign Language" comedian Robin Thede performed on The Nightly Show. The emoji of clapping hands has existed in Unicode since 2010, but truly started to pick up speed in 2014; now, the clap is so popular on social media that there is a website devoted entirely to automatically putting the emoji between each word for you for whatever you type into it.

The sudden proliferation of tweets where clapping hands are used ad naseum have been met with both excitement and criticism. Some Twitter users deem them annoying and obnoxious, while others can't wait to start showering their posts in this emphatic emoji. Many Twitter users turn the clap into a mocking gesture, emphasizing things that really need no such emphasis. Others fight back saying that clapping hands do not make a statement any more valid or original — but it was never about that in the first place, was it? It's just not the same on Twitter.